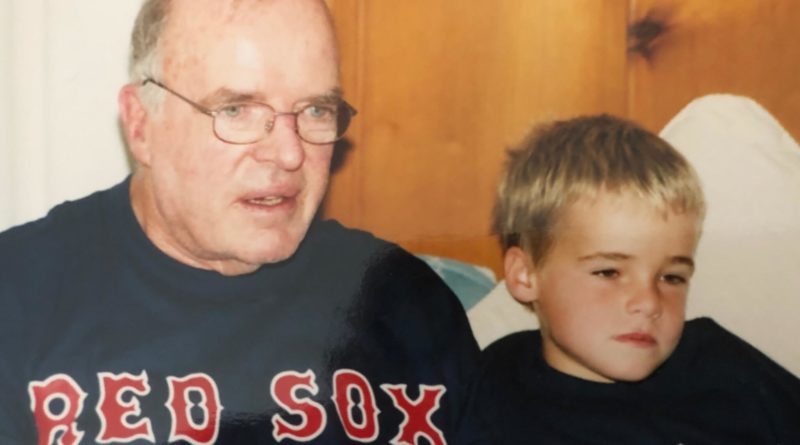 Watching the Red Sox with each of my grandfathers was always special.

This happened in the summers and it meant I was at a beach house next to Cape Cod or in a lake cottage in Maine. I could watch the eighth and ninth innings, not having to worry about school the next day. For a baseball-obsessed youngster, it was wonderful.

But the best part wasn’t the setting or the late nights, it was spending time with men who I looked up to and who cared about the outcome of games just as much as I did (even if they dozed off in the late innings from time to time).

When you’re little, enthusiasm is contagious. They were invested and that made my interest level increase exponentially. I loved being a fan with them, clenching our fists together after a tough loss or celebrating following a walk-off win.

I was fortunate to share this experience with both of my grandfathers.

My mother’s dad, Edward O’Connor, passed away last August. My father’s dad died before I was born, but my grandmother remarried, so I was lucky enough to have two grandfathers growing up. His name was Roger Cigol. He passed away last week. Both men lived long and for the most part healthy lives.

Since my grandfathers’ deaths, I’ve really started appreciating the time I got to spend with each of them. What’s been so surprising is how many of these memories are intertwined with sports.

In June of 2006 I was 11 and a budding soccer fan. The U.S. Men’s National Team was playing their final World Cup group stage game against Ghana. They needed to win to advance to the Round of 16. My family was spending the week at my grandparents’ house in Manomet, Massachusetts just outside of Cape Cod, and most of them were more interested in going to the beach than watching the soccer game. I on the other hand wasn’t missing this game for the world and was all settled in in my grandparents’ living room, eyes glued to the television screen.

Minutes before kickoff my grandfather (Edward) came down the stairs. I did not expect him to be interested either. Instead he sat down in his chair in front of the TV and we took in one of the most agonizingly painful 90 minutes of soccer I can remember. Team USA lost 2-1 on a controversial penalty kick and was eliminated.

To this day, I look back on that game fondly, not because of how angry we were, but because of how we felt those emotions together. Sports are better with others, especially loved ones. That was one of the first times I watched a soccer game with someone else. I’m so glad it was with my grandpa.

A year later, more of my mother’s family was at my grandparents’ beach house. It was Labor Day weekend 2007 and the Red Sox were in the middle of one of their most entertaining seasons ever. On that Saturday, the Red Sox played the Baltimore Orioles with pitcher Clay Buchholz set to make just his second major league start for Boston.

Through five innings, Buchholz hadn’t allowed a hit. That’s when my dad implemented the “no touching the remote control rule,” which as a 12-year-old, I thought was equal parts genius and hilarious. The logic was our family members weren’t going to be the ones to jinx the no-hitter. So for the next four innings, the remote stayed put and so did we. My grandpa in his chair, aunts and uncles squished on the couch and cousins huddled around the TV.

When Buchholz struck out Nick Markakis looking to end the game and clinch the no-hitter, we all went nuts. I was so happy we were all together.

During one year in the early 2000s, Roger and my grandmother Mimi (my father’s mother) stayed at our house in Massachusetts for Christmas. That year my parents gave me a massive box of baseball cards, which to this day is one of my all-time favorite Christmas gifts. That day Roger helped me sort every single one of them (I believe there were over 1,000).

A cool part of this collection was that there were “memory cards” with pictures of players from past generations that included images of what the players were most known for. This is how I learned about Reggie Jackson and why he was called Mr. October, Carlton Fisk’s home run off of the left field foul pole at Fenway Park and Bobby Thomson’s “Shot Heard ‘Round the World.” While he helped me organize, Roger explained why these moments and players were so significant. In addition to the cards, I was getting my own in-person baseball history lesson. How lucky was I?

There are countless more memories of my grandfathers created by a shared love of sports. They are memories I will cherish for the rest of my life.