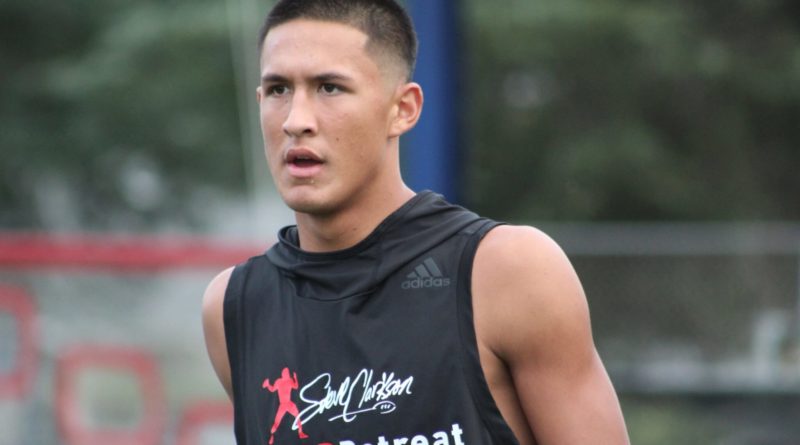 How fun would it be to assemble the best high school football players in Southern California onto one team? Scorebook Live reporter Connor Morrissette took a stab at compiling his SoCal football dream team.

The team is filled with players that will suit up next season in the LA City, San Diego and Southern Sections. Eleven offensive players, 11 defensive players and four special teams players were chosen. The criteria was simple: be the best at your position based on past production and future potential.

Buchner threw for 4,474 yards and 53 touchdowns in 2019 at Bishop’s. He’ll play his senior season at Helix. Buchner is committed to Notre Dame.

Greene is widely regarded as one of the best offensive line prospects from Southern California in the last decade.

Migao was named the Southwestern League offensive lineman of the year a season ago. He was also a Southern Section All-Division 4 selection.

Simmons stands at 6-foot-6 and weighs 280 pounds. He’s the consensus top guard prospect from Southern California in the 2021 class.

Murphy is committed to USC.

Cardwell has transferred to Morse from St. Augustine. Morse runs the wing-t, which will give Cardwell plenty of chances to add to his 34 career varsity touchdowns.

Collins caught 41 passes for 1,008 yards and 14 touchdowns for the state champion Braves. He is committed to Clemson.

McMillan exploded onto the scene a year ago catching 65 passes for 851 yards and 12 touchdowns.

Burnett will play a big role for Servite following his transfer from JSerra. Look for him to play tight end and wide receiver. Burnett currently holds ten scholarship offers, per 247Sports.com.

Foreman is a top five national recruit in the 2021 class. He’s committed to Clemson. Foreman had five sacks a year ago despite drawing consistent double teams.

Toia is a run stuffer; he had eight tackles for loss a year ago. He’s committed to USC.

Davis is committed to LSU. He had 16.5 tackles for loss last season.

Tuihalamaka is committed to USC. He made 65 tackles last season, seven of which came for a loss.

Wright is the top cornerback in the 2021 class in the state, per 247Sports. He intercepted three passes a year ago.

Jackson is a shut down corner. He had one interception and a fumble recovery last season.

Turner-Gooden excels on both sides of the ball (he plays receiver too), but he’ll most likely play safety in college. Turner-Gooden transferred to St. Bernard from Calabasas this offseason.

Ramsey had four interceptions and a forced fumble last season. He made 80 total tackles.

Harvey does a little bit of everything for Sierra Canyon. He’s a standout wide receiver and cornerback who also returns kicks and punts. He returned two punts for touchdowns last year and amassed over 500 yards in combined punt and kickoff returns.