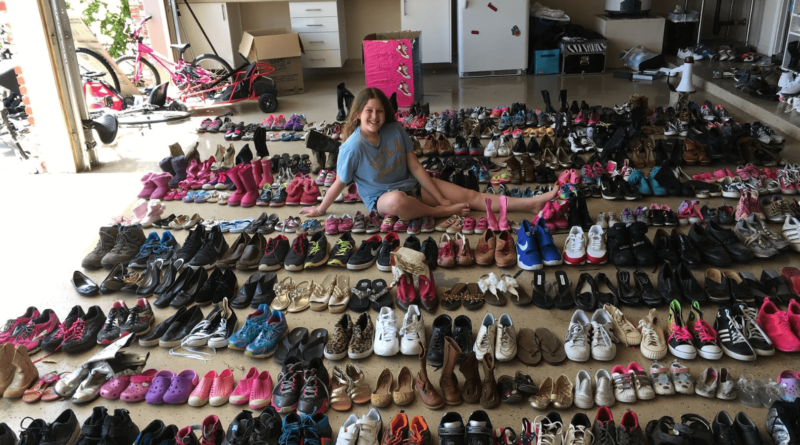 The idea came to Lindsay Sobel when she was cleaning out her closet.

“Oh my goodness, I haven’t worn half of these (shoes),” she thought. “Donating shoes would be a great way to give back to the community.”

So Sobel got to work, putting together her Shoes for Souls charity in the summer of 2016 as part of her preparation for her Bat Mitzvah. Since then she has donated more than 22,000 pairs of shoes to families in need in the greater Los Angeles area.

Sobel, a sophomore volleyball player at Sierra Canyon, has put on a week-long shoe drive the past four years at the Trailblazers’ summer day camp. Campers and their parents are encouraged to donate old shoes they no longer wear. Groups of campers compete to see who can donate the most, with the winning team earning Krispy Kreme donuts.

“The kids get really involved,” Sobel said. “They want to win.”

When the annual drive ends, Sobel organizes the shoes, sorts them and then donates them to local homeless shelters. Ira Diamond, a podiatrist and founder of the Shoes for the Homeless charity, assists Sobel by helping her deliver the shoes.

In addition to working with the summer camp, Sobel has partnered with the Sierra Canyon basketball team in an effort to have larger shoes donated to her charity.

“There aren’t a lot of size 15s running around out there,” Sobel’s father David said.

In March of 2019 Sobel partnered with the charity HavASole to help donate shoes to a Compton youth center. She was able to hand out shoes herself at the event.

“The kids are so appreciative,” Sobel said. “They ran up onto the stage and they were so excited to get the shoes. Their eyes lit up.”

In the future, Sobel hopes to attend a four year college. She’s looking to stay local, which will help her continue her charity work. She is also hoping her younger siblings will help her with Shoes for Souls in the future.

“It’s not like the problem is going away,” Sobel said.

Do you have shoes you’d like to donate to Shoes for Souls? Email Lindsay at LindsaySobel@iCloud.com and she will pick them up.