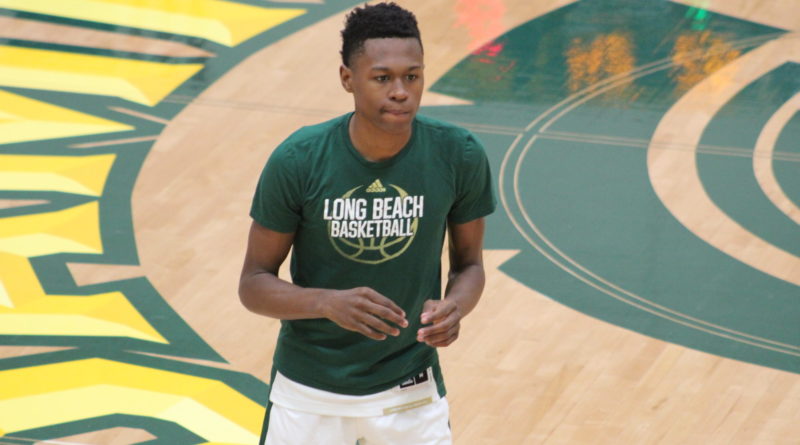 Watson is a 5-star recruit who was being recruited by UCLA, Gonzaga, Arizona, Texas Tech, Virginia, Oregon and many other schools. The most recent school to show interest in the 6-foot-7 wing? Kentucky.

As a shooting guard or small forward with ample guard skills, Watson is 6-7 180 and has a wingspan in the vicinity of seven feet. Just last year he was listed at 6-4, and he’s probably still growing. But he hasn’t lost any agility, durability, coordination, or skill despite rapidly growing from the length of an NBA shooting guard to the length of plenty of NBA power forwards. He’s still easily athletic enough to play the wing at the highest level.

He’s a deadly shooter from both mid-range and from far past the high school arc, both spotting up and off the dribble – just two games worth of film tell the tale.

Watson also has the point guard skills to take the ball up and run the offense. He played a good chunk at essentially every position on a regular basis this past season, but most Poly games included ample time with the ball in Watson’s hands as a lead guard to make plays and/or finish them.

Watson can break point guards down off the dribble, and the fact that he’s a threat to pull up or step back with a hand in his face makes him all the more dangerous to contain. If he gets near the rim, he can both dunk in traffic and also lay it up at a strong clip, including some difficult double-clutch maneuvers. He can dribble and finish fluidly with either hand. Send help and he’s seeing over the defense and making the right pass to an open teammate.

GREAT VERSATILITY, INTANGIBLES, AND FEEL FOR THE GAME

Even though he’s still developing, Watson already has so many qualities that you want in a guy who has the ball in his hands a lot.

When attacking off the bounce, he doesn’t try to get unnecessarily fancy, and he’s not turnover prone. He seeks out high-percentage shots either from the perimeter, often trying to get free for a pull-up jumper in rhythm, or around and above the rim. As you can see in the film, he has the flashy skills when necessary but excels at making the simple play.

Watson also doesn’t have tunnel vision – part of what makes him great now and will make him even better at higher levels is that he’s truly unselfish. He trusts his teammates but isn’t passive. His high basketball IQ involves knowing where help is going to come from and thinking a pass ahead, while also keeping in mind his teammates’ tendencies. When they go off without him, he gets hyped for them.

In the games I’ve seen him, his team has needed vastly different things from him and he’s responded. One game was at the end of a grueling tournament and not one player on either team had any legs under them, so Watson controlled the game by getting to the free throw line. That’s something he’s consistently able to do by feeling out defenders and attacking the rim without any flopping or flailing. And he converts at a great clip. In that game, he came up clutch and they pulled it out in double overtime.

In another game not long after that, he got ridiculously hot from the field right from the tip and outscored a strong Taft team alone through three quarters with 33 points on 10-of-16 shooting. He got into rhythm by letting the offense come to him, finishing some good looks, and catching fire organically. Once he was on a role, he was the lead ball-handler for the rest of the game. In other games where he’s been the biggest guy on the court, Poly runs plays through him in the high post and he’s willing to move without the ball in order to get it with good position.

Watson’s combination of skill, length, athleticism, and basketball IQ/feel makes him a complete wing on the offensive end. With his great range and willingness to run the floor, he’ll always be a threat off the ball, but he’d be an ideal secondary playmaker from the wing. Not only will he be deadly attacking closeouts, but with his solid handles and comfort running pick-and-rolls, there’s no reason to think that teams won’t be able to play through him when he’s in rhythm. Especially with his ability to turn broken plays into free throws.

Watson projects as more than just a strong offensive contributor at either wing position when he reaches his peak. Part of why he’s an elite prospect is that his will and ability to contribute to all parts of the game isn’t going anywhere.

With his overwhelming length and strong athleticism, Watson embraces his ability to dominate defensively both in space and around the rim. He spends some games guarding the other teams biggest perimeter threat, often doing solid work on other future NBA prospects. Other games he spends more time guarding up front and shining as a help defender. In the Taft game for example, he also had six blocks to go with his 33 points – all in less than 25 minutes of action. To round it all out, he averages close to 10 rebounds per game.

Watson won’t be the size of a center once he’s out of high school, but he will always play winning basketball. That means taking pride in maximizing his defensive rotations and locking up the defensive glass. And he’ll still have excellent length for a wing, so I think he’ll still make a strong impact as a defensive rebounder and rim protector for a SG/SF.

It’ll take some time for him to fill out his frame and get used to playing so many different types of roles at the highest levels. But when Watson reaches his peak, watch out. And don’t forget, he’s probably still growing.