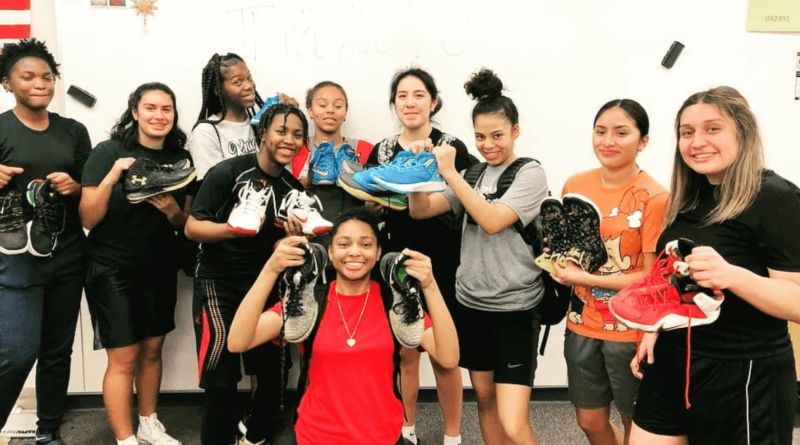 In 2008, a group of eighth graders at Crossroads School in Santa Monica, many of whom were on the school’s basketball team, needed to fulfill community service hours.

So they decided to place bins around the school grounds looking for new or lightly used sneakers that could be donated to the Santa Monica Police Athletic League. They called the project Sole Brothers.

With the help of Crossroads middle school basketball coaches Travon Muhammad, a Crossroads alum, and Rich Singer, the basketball players from the eighth grade group started an AAU team and stuck with the same name — Sole Brothers.

During one AAU tournament that summer, Sole Brothers played against a team from East LA and Muhammad noticed that the team’s top player was wearing a worn down pair of skateboarding shoes.

“I took him to my truck and gave him a pair of hoops shoes,” Muhammad said. “His coach went on to tell me that kid has never owned a pair of basketball shoes, he’s crying in the corner, he’s just so happy.”

That struck a nerve with Muhammad. A few months later he sat down with Singer to discuss making the Sole Brothers charitable project a bigger entity.

“I didn’t think this kid is the only kid in LA County that could use a pair of basketball shoes,” Muhammad said. “So we had the boys do another community service project and we made it a non-profit, something we do annually.”

From there, the charity was born. That first individual Sole Brothers donation evolved into a nonprofit 501c3 organization that collects gently worn athletic shoes and donates them to those in need.

Flash-forward to 2020 and Sole Brothers is still going strong with more than 2,500 pairs of shoes donated. Earlier this season, the Palisades girls basketball team took on Knight High School at home. Palisades junior Sammie Arnold and a few other teammates noticed a lot of the Knight girls didn’t have basketball shoes.

“They were slipping all over the place,” Arnold said.

So Arnold spoke to her father Michael, a Crossroads alum and former Sole Brothers AAU coach, about getting in touch with Muhammad in an effort to donate shoes to the Knight team.

Eventually Muhammad got in touch with Knight girls basketball coach Daniel Henderson through another Crossroads alum and PE teacher at Knight, Brandon Wilkerson. Muhammad worked with Wilkerson to get the girls’ shoe sizes before getting together with Henderson to donate the shoes.

“When we met up, he was so excited and just thankful and grateful,” Muhammad said.

To make a shoe donation to Sole Brothers you can contact them here.