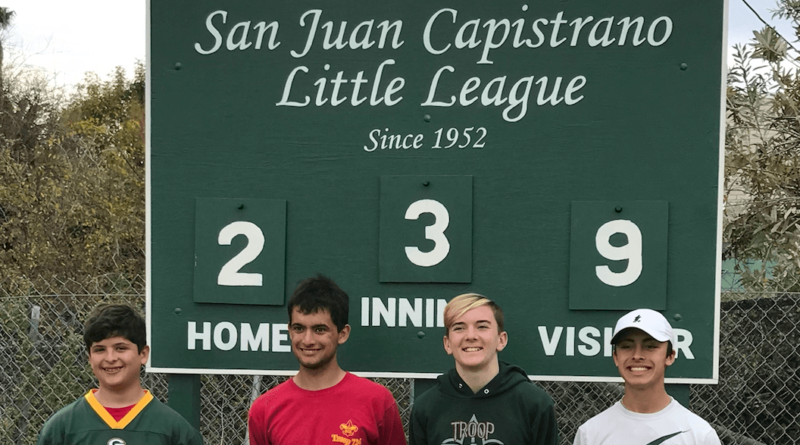 Baseball has been such a big part of JSerra pitcher Eli Robles’ life that when it came time to pick his Eagle Scout service project, he knew exactly what he wanted to build.

Robles, who at age 16 earned the nickname “The Wizard” for his precision on the mound, planned to construct a scoreboard for the Little League organization he grew up playing for, San Juan Capistrano Little League.

“They really needed one,” the JSerra senior said. “I played little league there all my life. I had a lot of great coaches and even after I stopped playing there, I went back to coach my brother’s teams. The best way I could utilize the Eagle Scout project was to give back to the league.”

Robles got his scoreboard project approved at the end of last summer by the Boy Scout board and then he got to work. Robles will officially become an Eagle Scout once he passes a board of review, which is on hold because of COVID-19.

Growing up, Eli’s father Eric would have his oldest son help him build cabinets in their home and work on the family cars. Those lessons helped immensely when it came time to put the scoreboard together.

“I give a lot of credit to my dad,” Robles said.

The project required 4×4 pressure treated posts, green paint, numbered pallets for scoring, a 4×6 board, white paint, stencils, concrete and a wooden step to allow kids to score games by hand.

With the help of his father, patrol leaders and a few other scouts, Robles finished the project in February.

“The scoreboard came out really good,” he said. “I was really impressed with the hard work we put into it.”

Even though the San Juan Capistrano Little League season has been suspended, games had already been played with the scoreboard in place this season. It was a big hit.

“A couple of weeks ago I went to a game and I could hear parents murmuring about how cool the new scoreboard was,” Robles said. “It feels good to know that I made a difference for the league, even for kids and parents who don’t know me.”

As a senior Robles was supposed to be playing his first season of varsity baseball for JSerra, a team firmly in the hunt for a Division 1 Southern Section championship. With many Southern California school districts announcing schools will stay closed until at least May 1 due to coronavirus concerns, the spring sports season for high school athletes in the state looks to be in jeopardy. Despite the unfortunate and unprecedented circumstances, Robles is staying positive.

“It’s a really difficult time for all athletes, but it’s a good time to count our blessings and look at how beautiful high school sports and sports in general really are,” he said. “They connect so many people across the world. I hope everyone stays safe and finds something fun to do in these tough times.”