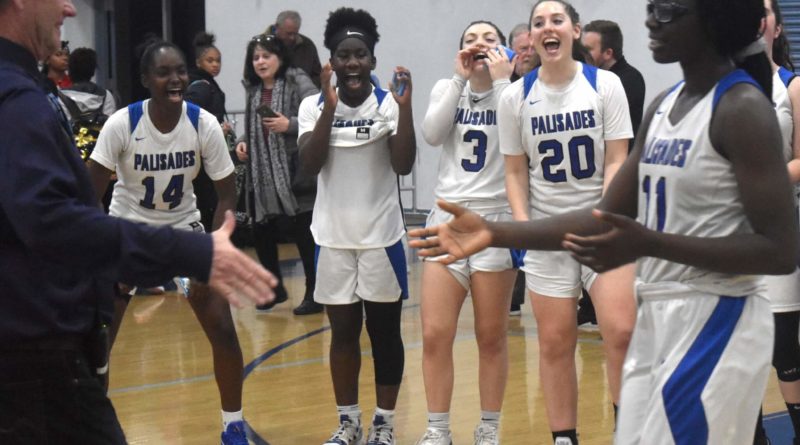 Here are Scorebook Live’s 2019-2020 girls basketball awards for the L.A. City Section. The voting was based on non-league, in-league, and postseason play, with some emphasis on games within the City Section. Statistics, team success, strength of schedule, and defensive intangibles were all major factors. Players in the Open Division, Division 1, and Division 2 were eligible.

Last season’s Division 1 Player of the Year seems like a lock to win it again at the Open Division/All-City level. Nwaba, a Pepperdine commit, dominated all phases of the game for the City Section champion. In addition to taking over games with her scoring and rebounding en-route to averaging a double-double, she was also one of the best passing frontcourt players and most impactful defensive players in the section.

Aiden, a California Baptist University commit, averaged over 3.5 blocks per game on the season on only 1.9 fouls per game. And when she wasn’t deflecting shots, she was either obstructing them or eliminating them just by being there–her impact as an intimidator was significant, as players would pass up viable shots just by seeing her five feet away. Aiden threw in 1.4 steals per game as well for good measure.

The West Valley League co-MVP averaged 17.1 points and 2.7 assists per game for ECR, and even those averages seem to downplay her dominance as both a scorer and a playmaker. Saidoff was also one of the top defenders in the section, not only guarding and racking up steals on the perimeter but also nearly leading the Conquistadors in defensive boards and even blocked shots.

In her first and only year as a Cougar after transferring in from Long Beach Poly, the Alcorn State commit averaged 18.3 points, 4.1 rebounds, 3.6 assists, and 3.9 steals per game in 28 games for Crenshaw. Her ability to get in the paint and either take or set up a high-percentage look was second to no one in the section.

One of the most versatile players in the section, Rankin led Hamilton in all five base stats and went off in some of their biggest games of the year. At 5-11 with great athleticism, she saw minutes at all three frontcourt positions and even some time at point guard.

The Marine League MVP and best mid/high post threat in the section, Graham led Carson with over 20 points, nine rebounds, and three assists per game. With deadly touch from mid-range and around the rim, she was too big and strong for forwards and too agile and skilled for centers to guard. Additionally, Graham quickly got used to seeing triple-teams and was excellent at getting the ball out of the post to an open teammate.

A six-footer with great touch inside, Grimes scored in the vicinity of 20 points per game for the Comets in efficient fashion. She was also a strong rebounder and defensive player for the Division 1 champion.

In addition to her aforementioned defensive dominance, the other West Valley League co-MVP averaged 9.9 points and 10.6 rebounds per game and passed the ball at a high level.

Open Division champion Palisades had the best trio of perimeter players in the section with the next three honorees who all were all First Team candidates, and placing them was difficult.

In Pali’s system ripe with ball movement and multiple offensive threats, everybody got great looks and was also maximized as a passer. All three could’ve scored in more volume on a less talented team. Pettis, Lagway, and Arnold all put up similar production and took turns dominating throughout a given week or month. Next year, all three will have a great chance at MVP or First Team as Pali will be the favorite to repeat as the City champion.

Pettis was a threat to lead a game in either points or assists on any given night. She was also one of the best defensive point guards in the section and evolved at controlling the tempo on both ends as the season went on.

Arnold averaged 11 PPG for Palisades and was also a standout passer and rebounder at the wing. In addition to a consistent array of guard skills, Arnold has a high basketball IQ and was another major contributor to the Dolphins’ ability to control the tempo against almost everyone they played against.

A dangerous shooter and microwave scorer, Lagway also led Palisades in scoring in numerous big games. That included 19 points in the section title game against Hamilton, with 15 coming in the second half. Additionally, at upwards of 5-9 with great length and athleticism, she was able to spend a lot of minutes defending frontcourt players while still keeping guard skills in Pali’s offense.

Another versatile Lady Yankee on this list, Blevins started at small forward, played both guard positions, and saw a little bit of time matched up against power forwards as well. In addition to scoring at all three levels and passing the ball very well, she could guard a handful of positions and even provide some weak-side rim protection.

As just a freshman, Waugh was the second-leading scorer for Westchester and one of the most disruptive perimeter defenders in the league.

One of the best creators off the dribble in the section, Holley averaged 11 points, 4.8 rebounds, 4.1 assists, and 2.3 steals per game for the Patriots.

Chensam is a pass-first point guard who can also get buckets, defend at a high level, and help on the glass. When she was on, Hamilton was nearly unstoppable. A lot of her work doesn’t always show up in the box scores, but she was a key cog in their explosive offense.

I hate the cliche in regard to one’s position that someone is “just a basketball player”. But I am almost positive that Pollard saw real minutes at all five positions on nearly a gamely basis last season, and was dominant on both ends at any of them. At close to six feet with the athleticism of a guard and the driving ability of a wing, no one was able to hold Pollard and the whole whole LACES squad from a City Section Division 2 title.

Watson led Legacy in every base stat with 11.4 points, 7.2 rebounds, 3.9 assists, two steals, and nearly a block per game.

A versatile forward who is particularly dangerous when hot from deep, Quintana led Taft with 13.1 points per game in addition to 4.1 rebounds, 1.3 assists, and 1.8 steals.

Perhaps the best rebounder in the section, Muhammad averaged 7.1 points, 11.5 rebounds, 1.7 steals, and 1.3 blocks per game. Her 6.4 offensive rebounds per game was the highest mark among City Section contenders, despite all Granada’s players’ individual stats being deflated by a very challenging non-league schedule.

The paint anchor for Open Division contestant Taft, Callejas averaged 10.4 points, 1.3 assists, and a team-high 8.6 rebounds per game. She had a lot of her best performances in some of Taft’s biggest games against their strongest City foes.

Another contender for DPOY, Dufresne averaged 3.2 blocks and 2.3 steals per game on Narbonne, one of the best defensive teams in the section. And that was to go with 10.4 points and 8.8 rebounds per game.

Powell averaged a double-double on 54% shooting with over 11 points and 12 rebounds a game, plus 2.2 blocks. She recorded multiple 20/20 games, including one in a playoff victory.

Sixth Women of the Year:

A physical tone-setter with the ability to excel at both frontcourt positions, Scott was a double-double threat and strong defender off the bench for the champs. She closed most games without starting them, and came on especially strong down the stretch of the season and in the state playoffs.

Not a lot of top players embrace the Sixth Man/Woman role in their senior year, but Delgado earned First Team All-West Valley League coming off the bench. She brought a scoring punch and outstanding perimeter defense to GHC’s second unit, and usually closed games while having played full starter’s minutes.

Love packed the stat sheet with 7.7 points, 4.1 rebounds, 1.7 assists, and 2.2 steals per game off the bench for ECR. Her defensive versatility was a strong factor in their defensive success in both half-court and full-court settings.