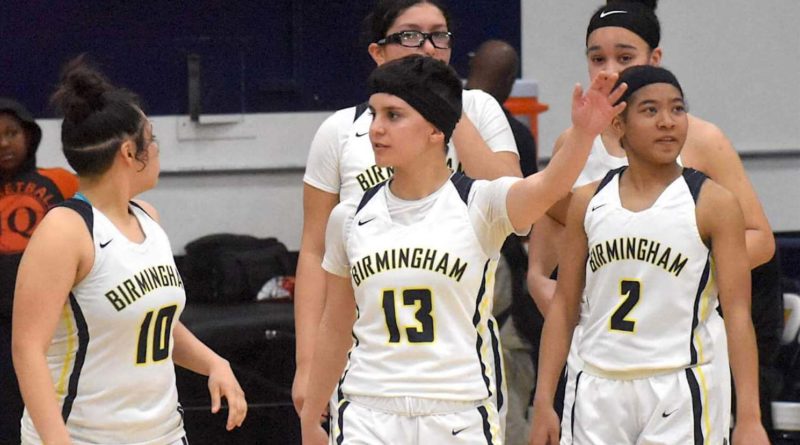 It’s never too early to look ahead to next season, right?

In Southern California high school girls basketball — spanning the L.A. City, Southern and San Diego Sections — there are three teams we’ve identified as poised for breakout seasons in 2020-2021. All three teams were strong this past season, but they are ready to take the next step. All three won playoff games at either the Division 1 or Open Division level, and all three have a strong basketball tradition.

Assuming these teams return their same non-seniors next year and continue to improve, they all have a great chance to contend for section titles and go on a run in the CIF state playoffs.

Going down in the Division 1 quarterfinals last season and finishing the season with a losing record, it would be easy to overlook how potent Birmingham was. Nearly every single one of their losses came to good or great teams, many of them coming down to the wire: Pacifica (Oxnard), Palisades, Crescenta Valley, Clovis North, Leuzinger, Chaminade, Mount Miguel, Village Christian, El Camino Real, Taft (twice), Granada Hills Charter (twice), and Carson.

In the playoffs, drawing eventual finalist No. 7 Carson in the second round as the No. 2 seed in Division 1 was awful luck, as they were certainly a top-three team in the bracket but didn’t play as many non-league games as most of their peers. While some of those games the Patriots could have won, there is not one single slouch in that group.

A lot of the upper echelon teams in the City Section will lose key seniors before next season. Many of them will still be in good shape to contend for Open Division playoff victories, and some will likely fall off. Birmingham will rise as a result of both some teams falling off and even more from returning just about their entire core. That includes their entire incumbent starting five returning, four of them as seniors.

They already have a few of the better players in the City, and all of them have remaining upside. Sophomore PG Janna Holley and PF/C Jazmyn Washington were First Team All-West Valley League last year. Holley’s ability to take over games as a playmaker improved as the season went on, and Washington’s strengths as a defensive anchor, rebounder, and occasional inside scorer will all be maximized with another year to get bigger.

Then there’s combo guard Bita Hashemi who was Second Team All-League and one of the best two-way players in the section on her best days. An athletic, versatile guard, she has the upside to break out into a First Team All-City player next year with more consistency, especially hitting shots from the perimeter.

Additionally, they have another 18.8 points per game coming from sharp-shooting wing Andrea Salazar and face-up big Lily Ramos. Both have great touch from the field and feel for the game, and there’s no reason they can’t also take strides into First Team All-League-caliber players with room to spare.

Lastly, depth was an issue with Birmingham last season, but they have a lot of returning players who saw limited but regular minutes off the bench in all those big games. With a likely jump from the second-unit group featuring Aliah Medina, Mia Calderon, and Laila Kelly, the Patriots could have all bases covered.

Birmingham is very well-coached, they play together and move the ball, and have a complete team construct with multiple strong creators and shooters. With more seasoning, development, and consistency, I think they will be at least an Open Division semifinals team with a realistic chance of going all the way.

Lynwood was already too good this past season to be considered a “breakout candidate” in any section in the country other than the one they are in. There are so many elite teams in the Southern Section that a team can actually make the Open Division final, nearly knock off Sierra Canyon, Mater Dei, and Etiwanda in the playoffs, and still go under the radar. Some rankings out there don’t have them anywhere near the top of the best teams in SoCal.

Either way, nobody is going to be sleeping on them by the halfway point of next season. They will miss two seniors next season, their second-leading scorer and rebounder G/F Cheyenne Whitfield and another key wing in Tia Calloway. Their size, scoring punch, and versatility will be hard to replace, but with the rest of their squad returning, Lynwood is likely to be quite a bit next year if they keep developing.

5-star junior Rayah Marshall, a 6-3 guard by trade who essentially plays every position, was already one of the better players in the country in 2019-2020, and is a major threat to have an All-American-type year in 2020-2021. At whatever position you classify Marshall, her and PG Briliyah Taylor could make one of the best tandems in California next season. With Gs Jada Laititi and Jada Turner also returning, Lynwood could have one of the best backcourt rotations in the country, but with enough size in the backcourt alone to match up with anyone.

They were already a bucket or two away from pulling off some of the biggest upsets of the season this past year, and also did a great job taking care of business against a ton of nearly-elite competition. The Knights don’t need to be radically better to make a Southern Section Open Division finals appearance, and either contend for a state Division I title or win games in the CIF Open Division bracket. Especially with numerous other Southern Section powers at risk of regressing with key seniors gone. Once they’re in peak form next year, I expect them to be on everyone’s shortlist of the better teams in the country.

In the San Diego Section Open Division semifinals, Bonita Vista took the top team in the country, La Jolla Country Day, down to the last possession. Their first-round exit against red-hot Orangewood Academy also deceives how dangerous they could have been in the Division I state playoffs.

Some state and national rankings out there have the Barons surprisingly far from the top, which often happens for teams who play a lot of excellent but not nationally elite teams for most of the season. But where would they be in rankings and general chatter with one more score and stop against LJCD? Would they be out of anyone’s top 10 in SoCal?

The reason to think Bonita Vista will be one of the best teams in SoCal next season goes farther than a couple “impressive losses” against the likes of LJCD, Orangewood Academy, and Lynwood though. All year, especially once they were in rhythm a couple months in, they were consistent against some outstanding competition. Beating La Costa Canyon three times in a season, and both Bishop’s and Mater Dei Catholic by 15 or more twice is no joke.

While a lot of great SoCal teams will lose key seniors, BV will only lose one who played more than two games. They’ll miss the major depth boost from Emma Schroeder veteran presence, but with the rest of the squad coming back, they should be quite a bit better than they were in 2019-2020. They’ll have nearly 35 points, 18 rebounds, and seven assists a night coming back from G Julia Cosalan, G Sylena Peterson, and F Madison Canon alone.