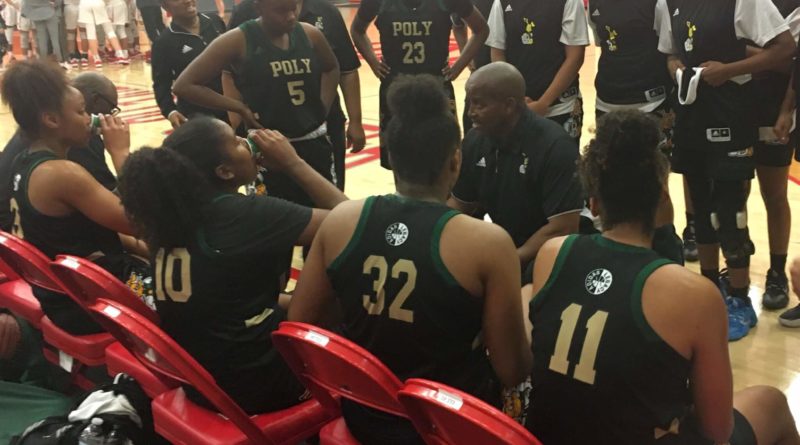 With the 2019-20 season wrapped up, here’s a look at 10 CIFSS girls basketball coaches who stood out for their excellent work. All 10 deserve to be in the conversation for Coach of the Year. The list is in alphabetical order of schools.

The best Cen10 girls basketball team in recent history, the Huskies went from a second-round playoff exit in the Division 1 playoffs to one bucket away from the Open Division finals. Last year’s squad was young and unquestionably up-and-coming, but when star C/F Jessica Peterson transferred out, the odds of them taking such a big leap plummeted.

Opponents loaded up on star G Jayda Curry all season from day one, but Woods was a step ahead of them. Behind Curry’s 22.4 PPG, Centennial’s second-leading scorer, freshman Sydni Sanders, was the only other Husky averaging double-figures with 10.3 PPG. Even still, with Centennial’s creative offense, their scoring held up against the best defenses in the country.

In addition to Centennial going 26-6, they avenged two of their six losses by beating rival King and Long Beach Poly their second times against them after dropping the first meetings. Their only other losses came to other national elites in Etiwanda (twice), New Hope Academy (MD), and Windward.

In her first year as head coach of the Huskies, Brown took Fairmont Prep from 14-14 with a first-round playoff exit to 25-8, the final minutes of the sectional championship game, and a CIF Division I playoff birth where they took West to double-overtime. To be clear, Fairmont Prep was in the Southern Section’s Division 1 last year and 2-AA this year. But knocking off the likes of Saugus and Marlborough on that playoff run–in addition to the state Division I playoff appearance–easily confirms how much better they were this season.

It’s not uncommon that coaches of elite high school contenders schedule a bunch of brutal draws to start the season, drop most or all of them, and regret it from there on out. Harvard-Westlake started the year with four straight losses against Bishop Montgomery, Sierra Canyon, Lynwood, and Windward–the first three all coming down to the wire–and was in grave danger of falling to 0-6 with West and Troy on deck.

But instead of spiraling downwards, they took the resilient path and never slowed down, despite being almost entirely devoid of upperclassmen experience in their rotation. The Wolverines bounced back to beat West in a nail-biter and defeat Troy as well en-route to going 25-5 for the rest of the season plus postseason. They took a double-digit loss to Marlborough in their first round of league play and had to edge out Chaminade in close games twice and avenge the loss against Marlborough to win the Mission League.

H-W was on such a roll come playoff time that they beat Huntington Beach, Rolling Hills Prep, and both West and Troy again on their way to a Division 1 title–all by double-digits with an average margin of 19 points per game. Finally, they also beat North and Marlborough (again) by double-digits before Cathedral Catholic edged them out in the state Division I regional semifinals.

Did someone forget to tell Poly that this wasn’t supposed to be their year to contend for an Open Division sectional and state championship? With a few key seniors gone and a Southern Region Division 1 quarterfinals exit last year, there just didn’t seem to be any reason to expect a big jump from last year, despite a lot of young talent returning. Instead, Poly, a top-10 defensive team in the country by the numbers, found themselves just a few points away from the CIF Open Division Southern Region title game. Highlights of their season included handing Mater Dei two of their three losses on the season and giving the top-ranked team in the country, La Jolla Country Day, their only loss all year.

Not only did Poly have a next-level defense and a knack for rebounding for a team without overwhelming size, but they also got it done offensively with their leading scorer at under 12 PPG and nobody else averaging double-figures. What they achieved with all these potential downfalls on paper was unbelievable.

The year is 2016, and the Mustangs just went 2-21. Imagine if right then, someone told you that by fall of 2019, Marlborough would be putting out a product that would nearly win a Mission League title, make the 2-AA semifinals, and win a game at the CIF Division 1 state level. That’s exactly how events have transpired under Chris Rodgers.

Last season to this past one was one of their biggest leaps yet. While the 2018-2019 Mustangs were perhaps their best iteration since their glory days a decade prior, they’ve still come a long way since last year’s second round exit from the 2-A playoffs. Marlborough is fully back into contention and beating times like West, Flintridge Prep, Harvard-Westlake, Valley View, and Troy. If recent trends mean anything, the best is likely yet to come over the span of a few more years.

Expectations for Mater Dei were as high as possible coming into this season, so the case for Kevin Kiernan is as simple as that they fully lived up to them. When your team goes 30-3 with arguably the hardest schedule in the country and you win an Open Division title in the toughest section in the country, then you are nearly automatically qualified as a COY frontrunner.

While it was no secret that the Monarchs were as talented as any team anywhere, they still had some challenges to work through without almost any letups. The sky-high expectations that Mater Dei almost always has to deal with is of course one of them. But as stacked with future D-1 hoopers as they are, there were only two seniors on the team and numerous underclasswomen in the rotation, including a freshman starting point guard. Mater Dei also had an overwhelming logjam of wings fighting for spots in the rotation without a lot of traditional sky-scraping post players. But through some adversity and an insane amount of games coming down to one or two possessions, they achieved their main goal of winning a Southern Section Open Division championship.

While North was already a solid Division 2-AA playoff team last season, they made the jump into make the semifinals and the Division I state playoffs, finishing the year as a clear top-25 team in SoCal. And they played two elites, eventual 2-AA champ Orangewood Academy and CIFSS Division 1 champ Harvard-Westlake, pretty close in losses upon getting to those stages.

North gets the most out of its players with Kamiyama’s machine-like pace-and-space offense. Players know to pass up good shots for great shots, and high-efficiency looks are clearly preferred. They move the ball extremely well and get out in transition when possible, but their uptempo offense never comes at the expense of securing stops on the other end. Even players at the end of the bench hop in ready to maximize the system, knowing where to be when and where to expect their teammates in the eclectic system.

If you’ve seen Rosary Academy play at all this past season, you probably saw right away that they are one of the best-executing defensive teams in the country. For a team with no lack of talent but not as much size or firepower as some of their regular foes, Richard Yoon had them mentally locked in and poised at nearly all times.

By the time of the state playoffs, the SoCal Division I back-to-back regional champs were a well-oiled machine. Their combination of defensive awareness and general ability to control the tempo was second to none.

To be blunt, Saugus started the season with a school shooting and ended with the highest-ranked Centurions team in school history. This is not just a feel-good vote because of what they had to endure–by all measures, this was the best team they’ve ever had, going 25-4 with a vastly more difficult schedule than usual. They only won one playoff game, but that’s because after last year’s successful campaign they got moved up to 2-AA, where they defeated a dangerous St. Anthony’s squad and very nearly knocked off a Division I state playoff team in Fairmont Prep.

It’s no secret that Windward is stacked with the talent needed to contend at the level they did, but that doesn’t mean Vanessa Nygaard didn’t have to do major work as a tactician. There might not be another team in the country that has not one or two but three overwhelmingly athletic six-footers with guard/wing skills like what Windward has in Juju Watkins, McKayla Williams, and Michelle Duchemin.

But within the meta of basketball in 2020, putting three slashers like that next to each other at the same time on a team without overwhelming floor-spacing is so difficult. Yet Windward’s offense never at any time devolved into talented driving threats waiting around taking turns to go one-on-one. Even with everyone’s scouting report saying Windward is at their best getting into the key, and defenses geared up on it, Nygaard optimized their offense with heavy ball movement, dribble-handoffs, unique off-ball movement, and unpredictable high-low action.

So, despite some overlapping skill sets, her offense got every player to shine within a cloud of high overall chemistry. And she also has a strong reputation for getting the best out of her players, making her one of the best high school girls basketball coaches in the country.