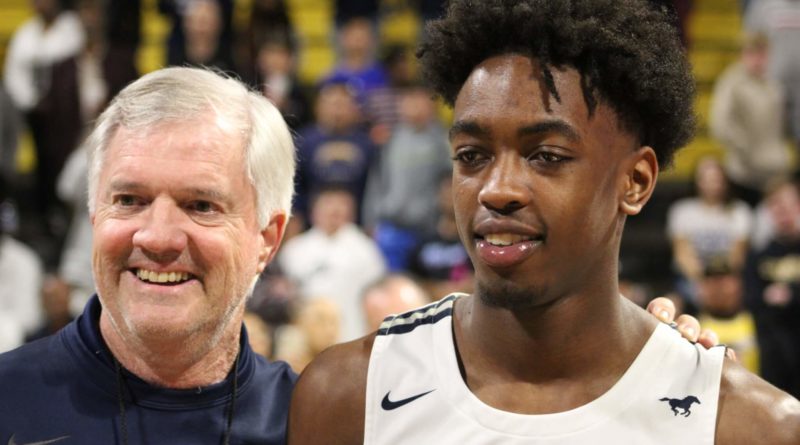 Dwyane Wade made waves Tuesday night on the TNT postgame show by calling out Sierra Canyon boys basketball head coach Andre Chevalier. When asked if he’d be at Zaire Wade and Sierra Canyon’s state championship game this weekend at the Golden 1 Center in Sacramento, he said no because he “[doesn’t] want to do [anything] to the coach.”

Zaire Wade is a point guard at Sierra Canyon in Chatsworth, California, where he transferred from American Heritage in Miami after last season. He’s a senior with a 3-star ranking and a few college offers. Wade transferred to Sierra Canyon at the same time that Bronny James started his high school career there.

With Zaire Wade and Bronny James at the center of constant media and social media attention while coming off the bench, there have been misconceptions all year about how they fit into the unique world of elite high school prep basketball.

The biggest misconception comes from the notion that if they don’t dominate statistically and even struggle to get minutes on their high school team, they can’t be that good.

This cannot be emphasized enough: Sierra Canyon basketball is far removed from most of the high school basketball world. The Trailblazers might have 10 future college players on their squad right now, and multiple projected NBA players. They are one of the best teams in the country and they play almost exclusively the best teams in the country. The assumptions that are often made about what players’ numbers and stats should look like at the high school level can be entirely thrown out when analyzing Sierra Canyon players.

Zaire Wade and Bronny James would start – and excel – on the vast majority of high school teams in the country.

Wade is a point guard by trade who plays both guard spots at times for the Trailblazers. That means he is playing behind both Gatorade National Player of the Year finalist Brandon Boston Jr., a 5-star All-American guard and projected top-10 pick in the 2021 NBA Draft, and Amari Bailey, a 5-star sophomore guard who also projects as a future NBA player.

Both Boston and Bailey play de facto point guard at times for largely positionless Sierra Canyon. That is why James and Wade come off the bench, and often are on the fringe of the rotation. And Sierra Canyon also has Tookey Wigington at guard off the bench, who is no slouch.

Even behind Bailey and Boston, Wade has to compete for minutes against those two lead guards. Very few players in the country would be getting any more minutes than Wade in his shoes. And it’s not like Sierra Canyon could just clear room for him by going “small” – Ziaire Williams, Terren Frank, Shy Odom, and Harold Yu comprise their frontcourt. That’s already a logjam with all of those guys deserving starters minutes.

With all that said, it is absolutely true that Wade struggles to get minutes because Coach Chevalier believes – and all signs on the court indicate – that Boston and Bailey should be getting all the minutes possible, and James and Wigington deserve some minutes too.

Wade might not be good enough to crack Sierra Canyon’s all-star rotation, but he would be starting — and dominating — for most high school teams in the country. Keep that in mind when you hear the noise about the Wade’s and Coach Chevalier.