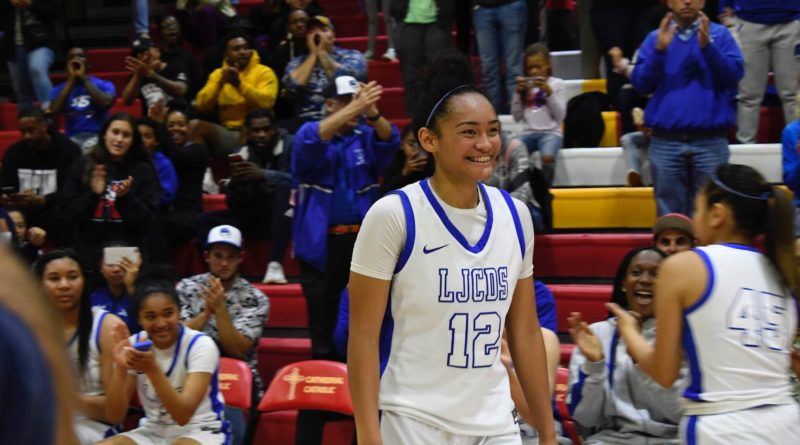 CARMEL VALLEY — Top-seeded La Jolla Country Day trailed Windward late in the second quarter when Sumayah Sugapong rebounded a missed Windward free throw, dribbled across half court and tossed up a desperation shot right at the buzzer that found the bottom of the net and gave the Torreys a one-point halftime lead. La Jolla Country Day came out strong in the second half and never looked back to beat Windward, 59-48, to win the regional final and advance to the CIF State Championship.

TE-HINA PAOPAO CONTROLS THE SECOND HALF

After being slowed in the first half, Paopao took control of the game in the second half and helped the Torreys extend their two-point halftime lead.

The Oregon-signee scored 14 points in the fourth quarter and finished with a game high 30 points.

“Not only can she score at will, but her defensive effort against them tonight was amazing,” Bamford said of her senior point guard. “Steals and rebounds, that effort and heart.”

Freshman post Breya Cunningham has been one of San Diego’s most dominant players in her first season, but only had one rebound in the first half against Windward.

We both made some shots, but they were dominating the boards.” Bamford said. “That’s where we were getting manhandled. We changed that, we got some offensive boards, some and-ones and I think that was the difference.”

Cunningham stepped up with eight rebounds in the third quarter alone to help the Torreys take control.

“Oh yeah rebounding was a big key,” Paopao said. “I think we got tired of hearing to rebound, so I think our girls started to do that and came up big at the end.”

TORREYS RETURN TO THE STATE CHAMPIONSHIP

La Jolla Country Day is headed back to the State Championship game for the ninth time in Terri Bamford’s tenure, having captured the championship in 2001, 2002, 2012, and 2015.

All of the Torreys previous appearances came in division four or five but this time will be different representing the State’s top division.

“Oh my god! This is our first open division championship, this is amazing,” Bamford said. “It’s so cool.”

The Torreys will take on Archbishop Mitty on Saturday night at 6pm at the Golden 1 Center in Sacramento.