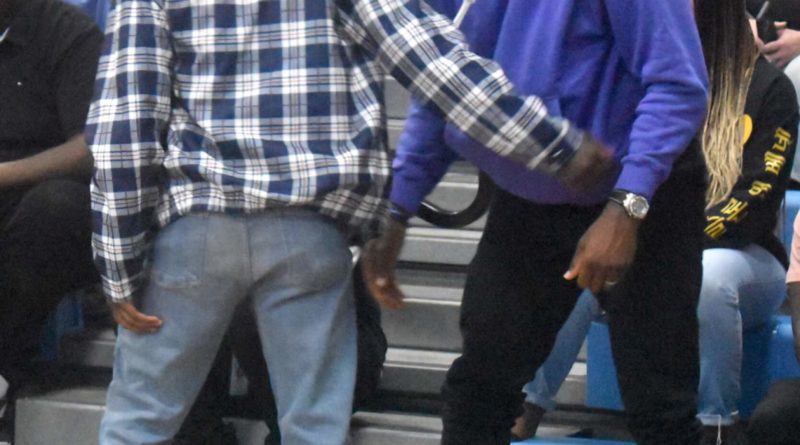 PACIFIC PALISADES– LeBron James, Jared Dudley, and YG were at Pali to watch the Dolphins beat Mikey Williams and San Ysidro 58-49 on Thursday. Williams led all scorers with 21 points and Anthony Spencer led Palisades with 17. Here are three observations from the game.

LeBron James, YG, Mikey Williams, and an opportunity to watch their team advance in the state playoffs? Of course Palisades had a sold-out crowd, and they had to keep the doors shut to keep more fans from getting in. As a result, the temperature soared to summer heat and unbelievable humidity in the gym–the walls were not only moist, but soaked with condensation at a level you almost never see because it was so packed.

It didn’t appear to affect the game at all, but nobody there will ever forget how warm and humid that gym was.

THE HALF-COURT HEAVE THAT CHANGED THE GAME*

Pali took the lead going into halftime instead of trailing on a high-arcing half-court buzzer-beater by Dylan Griffin. While Palisades won the second half by multiple possessions, that shot gave them three points, the lead, and a ridiculous boost from the crowd going forward.

San Ysidro freshman sensation was very productive without taking an excess of shots, but he had some bad misses and blown defensive assignments down the stretch. The crowd went on a tenacious “Mikey’s tired” chant numerous times.

He probably was tired, but he’s also been battling injuries stemming back to the sectional playoffs. It’s probably responsible for slightly less aggression than usual and multiple plays on which he left his man or didn’t get back on defense. Especially on a night when his teammates couldn’t get a lot going without him against a great Palisades defense.

Even at less than 100% with numerous mistakes, Williams was still great. And fans got to see a cool moment where LeBron pulled him aside after a timeout to give him some advice.

*Note: The initial post said it was a half-court shot by Anthony Spencer, but the shot was made by Dylan Griffin.