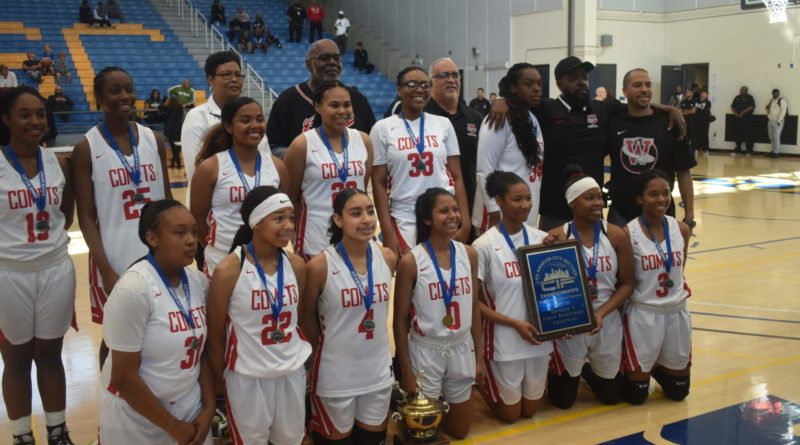 WEST ATHENS– No. 1 Westchester secured a Division 1 title Saturday at L.A. Southwest College in convincing fashion, blowing out Carson 67-38. G Rylei Waugh led the Comets with 17 points and F/C Ariana Grimes had 16 as well. F Justina Graham had 17 for Carson. Here are three observations from the game.

It would be an understatement to say that Westchester came ready to play. Not only were they poised and calm, but they were aggressive on both ends and firing on all cylinders. Everyone knows about Waugh and Grimes leading the way on a nightly basis, which they did in this game, but the Comets’ depth and chemistry runs many players deep.

Every player plays a healthy medium of aggressive and smart whether or not they get ten shots in a given game. They know where to find each other on fast breaks. With their defensive rotations solid, players can play aggressive perimeter defense without worrying that help won’t come. And with a deep bench, everyone can give maximum effort at all times. There’s nothing not to like.

Carson star Justina Graham went down with a major right ankle sprain early in the first half and missed much of the half. When she returned with a very swollen ankle, she still scored 17 points in presumably less than 20 minutes, and was even fighting for loose balls and making hustle plays on one leg. A lot of her buckets she had to create from scratch and finish through good defense. It was a gutsy effort, despite Carson getting routed.

IT ALL PAYS OFF FOR WESTCHESTER

To get here, Westchester started the season getting badly blown out routinely by some of the best teams in the country at the Mark Keppel tournament, and endured the rigors of the Western League as always. That’s a brutal regular season and their final record was only barely over .500, but it’s all worth it.

They were ready to bring their A-game every game of the playoffs, including the finals, and never looked like they weren’t ready for the moment. And one might assume that seeing the likes of Windward, Flintridge Prep, Rosary Academy, Cathedral Catholic, and Long Beach Poly early on helped prepare them.