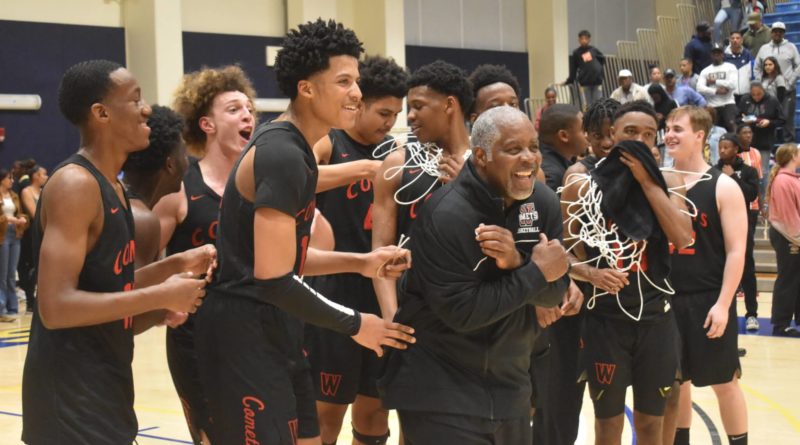 WEST ATHENS– Westchester was an underdog against Fairfax after dropping both league games against them in the regular season coming into Saturday’s title game against them at L.A. Southwest College. But the Comets put the top-seed away before the first quarter was over to win the L.A. City Section Open Division championship in a 68-43 victory that was far more lopsided than the final score indicates.

Joseph Johnson led the way with 23 points and five threes, and Marland Harris, Ky-mani Pollard, and Zion Sutton were also in double-figures. Here are three observations from the game.

It was 30-6 Westchester halfway through the second quarter. 42-13 at halftime. A lot of people double-taking at the scoreboard, and speechlessness. Keep in mind, No. 1 Fairfax was 2-0 against the Comets in league play, and the clear favorite to win match three for all the marbles coming into the section championship game.

MARLAND HARRIS BACK IN THE STARTING LINEUP

Westchester big man Marland Harris came off the bench and saw unusually limited minutes last week in the Comets’ semifinals victory over King/Drew. He was back in the starting lineup for the championship game and quickly made his presence felt with an early block and an alley-oop jam in the first quarter.

His energy combined with size that Fairfax couldn’t even come close to matching up with certainly helped set the tone for Westchester’s ridiculous first half. Plus, he anchored an excellent effort on the defensive glass in addition to 12 efficient points.

Two of Westchester’s biggest pitfalls on offense against elite competition this season have been inconsistent perimeter shooting, which in turn collapses their floor spacing, and getting reckless in transition. Obviously the Comets can’t simply choose to shoot lights out from the perimeter like this game on command. But with their combination of length and athleticism, maybe what they can replicate is electrifying their opposition in transition without falling victim to unwise turnovers and over-eccentric shot selection during fast breaks.

That said, whatever does or doesn’t happen in regional and state playoffs, Westchester is the official champion of the L.A. City Section. For them to put it all together against a rival that’s had their number when it mattered the most is more than enough. The potential of a further postseason run is icing on the cake.