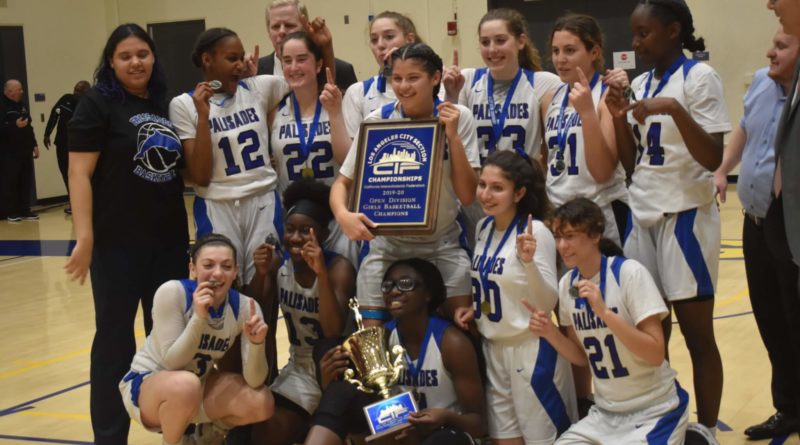 WEST ATHENS– Both of No. 1 Pali’s regular season victories over No. 3 Hamilton came down to the wire, and Hamilton played better than ever in the first two rounds of the playoffs. So it seemed that Hamilton was set to push Palisades more than ever in the finals. Instead, Palisades left no room for doubt in a 60-44 victory over the Lady Yankees for the Open Division title that was over quite a bit before it ended.

Demoni Lagway led all scorers with 19 points for Palisades. Ivy Scott and Alexis Pettis were also in double-figures for the Dolphins. Sydney Blevins and Kennedee Rankin led Hamilton with 12 and 11 points, respectively. Here are three observations from the game.

THE GROWTH OF ALEXIS PETTIS

The development of Palisades PG Alexis Pettis throughout her high school career and even since the start of this season paid numerous dividends in the title game. Her usual 11 points and staunch were both nice, but her impact went so much further than the numbers.

Pettis’ understanding of when to take over the offense has matured with her reps as a true point guard, and her improved consistency as a jump-shooter allows her to run the show without needing to live in attack mode. There were parts of the game, especially in the first half, where Pali was at their best running the offense by committee. At other times, she needed to control the tempo as a lead guard. Her efficiency in all departments seems to have grown by the month, but her understanding of picking her spots in ways that don’t show up on a stat sheet have really been on display.

Additionally, Pali is at their best when SG Sammie Arnold is able to facilitate. She’s probably the best passing wing in the section, so when Pettis is perfectly in tune with when and when not to dominate the ball or play downhill, it makes it even harder for defenses to gear up on what role Arnold is going to play in a given game. Despite an off-night from the field, Arnold had numerous assists at key times for Palisades as she has in many big games.

What makes Hamilton offensively volatile for both better and worse is that they are very dependent on manufacturing scoring from the perimeter against elite defensive teams like Pali. That was no problem for them against a strong perimeter defensive team in El Camino Real in the semifinals for instance when they were knocking down shots, which sets up their driving game. But they had to outshoot Palisades to win, and they got outshot.

It’s so impressive how strong of a season Hamilton had with almost no inside-out scoring presence and no traditional paint anchor either. But when they weren’t able to simply get hot from outside and start finding and making difficult looks from the outside in, they ran out of answers against a buzzsaw.

PALISADES THE PROHIBITIVE FAVORITE TO REPEAT

While there are numerous teams capable of winning the Open Division next season, Pali is going to be alone at the top of the list going into the season. They were so dominant against Hamilton even without the best player in the section, Jane Nwaba, as aggressive as usual. They went on some of their biggest runs with her even on the bench. And she’s the only senior on the team. Let that sink in.

Pettis, Lagway, and Arnold can all contend for MVP honors within the section next year. Ivy Scott, who was huge in this game, is returning to peak form after a devastating ACL injury that took her out all last season. Rose Morris is another strong player and key contributor who might take another leap next year. And then there’s one of the best supporting casts in the section coming back too.