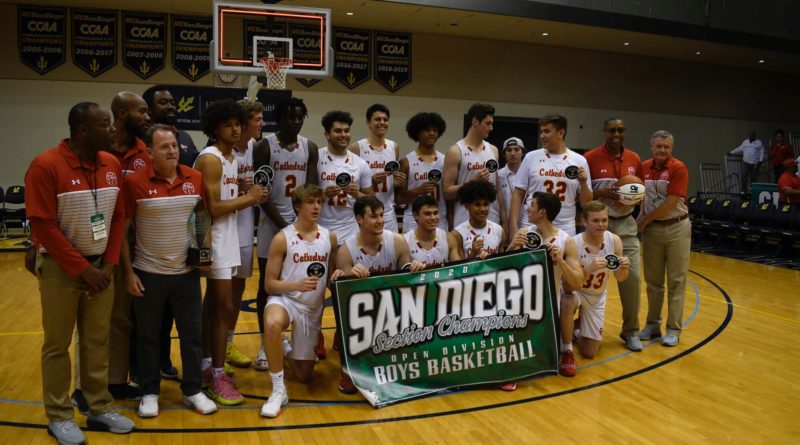 A big second half from Cathedral Catholic proved the difference, as the Dons took down Torrey Pines to win their first open division title in boys’ basketball. Trailing by three points at the half, Cathedral held Torrey Pines to 23 second half points and scored 34 of their own to seal the deal.

“We got stops and we tried to not give up as many layups,” Cathedral Catholic Head Coach Will Cunningham said. “In the first half we were giving up layups and getting too extended defensively, they were doing a lot of cutting and getting guys behind us.”

The Dons forced Torrey Pines into 15 turnovers and grabbed ten steals, with Beon Riley leading the way with four of his own.

“Honestly it was all defense,” junior forward Obinna Anyanwu said. “We all know what we can do on offense. It was just locking down on defense and making sure they’re getting tough looks.”

Cathedral Catholic was the outright winner of the Western League this season, but the Dons dropped a road game against Christian early in February. They bounced back by winning six straight since then, culminating in tonight’s win.

“I think that one league loss kind of helped us to refocus,” Cunningham said. We ended up beating them again in the first round.”

DONS MOVE UP AND REPEAT

Cathedral Catholic took down Francis Parker to win the 2019 division one championship and followed it up by qualifying for the open division playoffs this season and taking home their first title in the division.

“I don’t know how to explain it, it’s just a really good feeling,” Anyanwu said. “I feel amazing.”

Both teams will await Sunday’s CIF State brackets to release with the Dons advancing to the open division and the Falcons headed to division one.