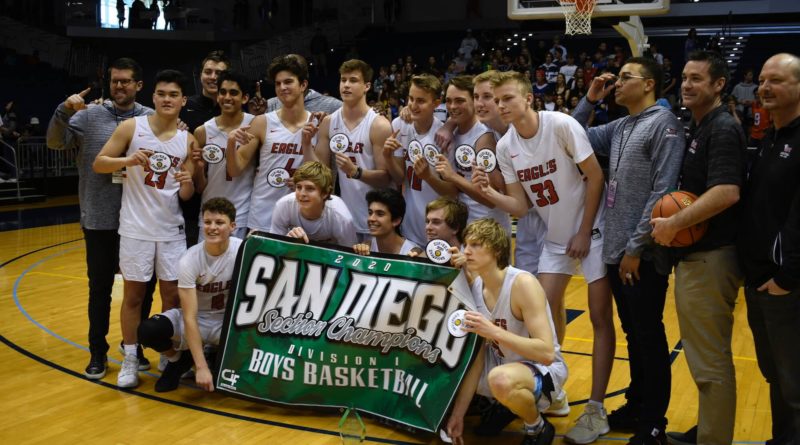 LA JOLLA — Santa Fe Christian had five players in double figures as they took down Carlsbad to take the division one championship in the San Diego Section.

The Eagles have now been victorious in six straight CIF Championship appearances dating back to the 2003 season.

Santa Fe Christian led by four points and halftime and stretched the lead up 13 points midway through the quarter. Carlsbad continued to fight, narrowing the lead back to single digits but weren’t able to get it closer than seven points in the third quarter.

“Our last game against San Marcos we kept getting eight-point leads and they just kept getting back into it. We practiced taking care of the ball when we have that lead and just expanding it,” junior point guard Hayden Gray said.

Carlsbad senior point guard Jailen Nelson had 26 points on 9 of 24 shooting and was forced into tough shots by Santa Fe Christian’s defense throughout the game.

TEAM BASKETBALL FOR THE EAGLES

Santa Fe Christian wrapped up the title with five players scoring between 11 and 15 points.

“Every day it’s teamwork in practice, we’re just trying to build a culture where it’s team oriented and it’s not about an individual person,” said Gray, who finished with 11 points, seven assists, and six rebounds.

With the game in control, Santa Fe Christian was able to insert junior guard Trevan Martin into the game with less than a minute left to play.

“It’s awesome,” Gray said. “We felt so bad for him when he had to go out early, but he handled it great. Coach always says it’s 10 percent what happens to you and 90 percent how you react, and he reacted great.”

Martin was forced to miss the entire season after breaking his foot just prior to the season.

Santa Fe Christian and Carlsbad each shot 7 of 23 from three-point range and combined for 32 turnovers, but it was the Eagles who won the battle on the boards, 38-25. Both teams dealt with injury issues throughout the season but for Carlsbad, injuries to their front court players came at the wrong time. The Lancers were without 6’6” guard Caleb Nelson, 6’10” center Kai Burdick, and 6’3” forward Kyle Vassau.

Both teams will advance to the CIF State playoffs, with brackets to be released on Sunday.