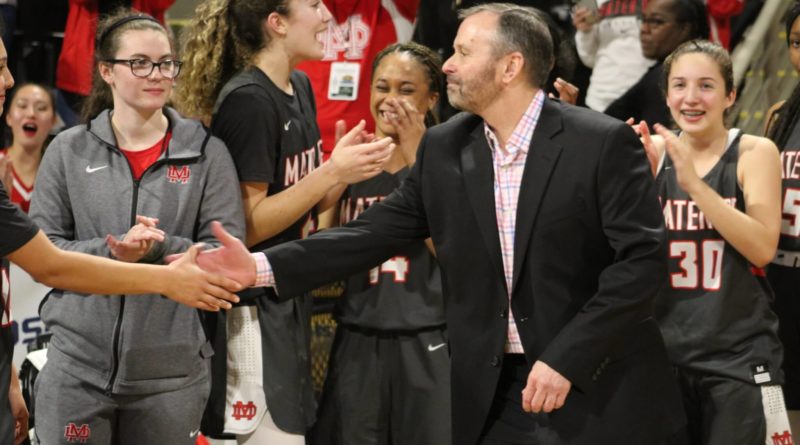 LONG BEACH– Mater Dei rising to the occasion has been a theme all year, and Friday’s battle with Windward for the Southern Section Open Division title was no different.

The Monarchs made countless big plays to keep Windward at bay and even pull away from them by the end of the game to snap their back-to-back streak of section titles. Soleil Montrose, Alyssa Frescas, and Brooke Demetre were all in double-figures for Mater Dei. Here are five observations from the game.

They say basketball is a game of runs. It’s not always true, but it sure was in this game.

Windward started the game on an energetic 7-2 run with perhaps more emphasis than a five-point margin would indicate. Mater Dei quickly generated momentum of their own and led 29-18 with five minutes left in the first half, including an 18-0 run in the second quarter. But Windward responded with an 18-4 run of their own to take a 36-33 lead going into halftime.

The third quarter was the only one in which there were no huge surges. It was tied at 52 to start the fourth quarter, but after a couple minutes, Mater Dei went on a surge for the rest of the game and ended up winning by 12, a lead which was up to 15 at one point in the waning seconds of the game.

Basketball has notoriously moved towards positionlessness over the past several years, and this game was a great example. Both teams have numerous players who can coexist on a court that can take the ball up and initiate an offense. Also, the amount that both teams threw a revolving wheel of defenders at each other’s top offensive threats also speaks to defensive versatility in the modern game that wasn’t always so eminent.

For instance, I said in our preview that the point guard matchup of Windward’s McKayla Williams and Mater Dei’s Caia Elisaldez would be one to watch because Williams has unbelievable length for a point guard and Elisaldez is a perimeter stopper with great quickness as well. Traditionally, when a point guard has a matchup that could hinder their ability to get their team into their sets, the whole offense can nosedive.

But in this game, at least five different Monarchs spent time assigned to Williams, who guarded multiple different players herself. With both teams loaded with strong perimeter defenders regardless of their natural position and capable ball-handlers/playmakers, the aforementioned potential facet of the matchup was actually not a big factor at all. That’s a function of how the game has evolved on both ends even in just the past decade.

Both teams feature one of the best freshmen in the country, Elisaldez on Mater Dei and Juju Watkins on Windward, who led the game with 28 points. Neither showed any traces of fear when playing on their biggest stage yet in high school–quite literally, with the action taking place at Long Beach State’s Pyramid.

Watkins was as dominant as ever and Elisaldez was both scoring at the rim and dishing teammates up when she had the ball in her hands. The fact that both of them will still be around in three years is hard to believe and undoubtedly disturbing to coaches all around SoCal.

A team doesn’t go 30-2 by accident, especially with most of their schedule consisting of the absolute best competition in the country. But it’s unbelievable how many of Mater Dei’s victories have come right down to the wire this season compared to just those losses to Long Beach Poly and Rosary Academy. Even in the loss to Poly, they came back from down 17 to force overtime, which is still impressive.

Of their 30 wins, 11 of them were by single-digits. For a team to go 11-1 in single-digit games against almost exclusively nationally elite competition is remarkable and statistically improbable. Throw in the fact that the one loss was in overtime and the Monarchs only have one other loss on the year, by 10, of course makes it more impressive. Additionally, they’ve had quite a few victories like this one in which the final score has a margin of ten or higher but was still neck-and-neck for almost all of the game.

While the Wildcats were obviously very disappointed about coming up just short of a three-peat, they were visibly not demoralized because their postseason may be far from over.

Windward didn’t win the section championship, but they will still qualify to make a run for state starting next week. And they know that they might get a revenge match against Mater Dei in the state playoffs, and potentially secure the outcome they want.

In the postgame press conference, Windward coach Vanessa Nygaard said, “Last year we beat Sierra Canyon in the championship and they beat us (in the state playoffs). That’s my challenge to all of these girls…we aren’t done.”