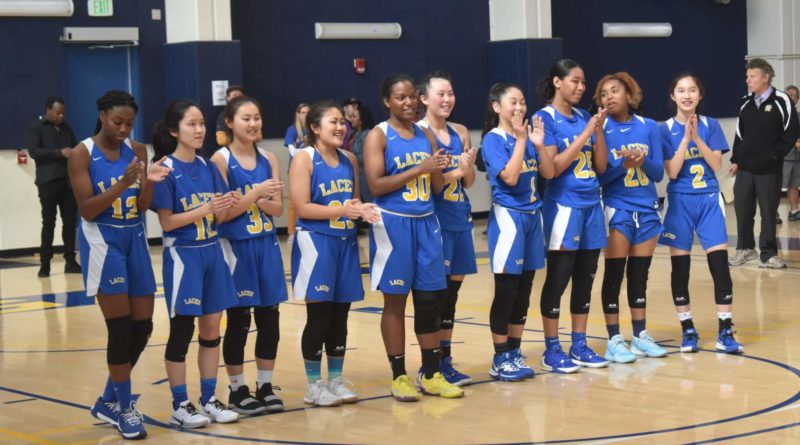 Follow our live blog throughout the day for game updates and recaps, and stay tuned in the coming days for separate photo galleries and highlight videos from most or all of the day’s games.

It figured to be another Dolphins/Lady Yankees match that would come down to the wire like the two previous ones this season, but Palisades pulled away around the turn of the fourth quarter and won 60-44.

It was a below-average shooting night at a bad time for Hamilton, who erupted from everywhere on the court against El Camino Real in the semifinals. Still, they left it all out on the court and received the second-highest honor in the City Section.

Demoni Lagway led all scorers with 19 points for Palisades and Alexis Pettis had 11 as well. Sydney Blevins led Hamilton with 12 points and Kennedee Rankin added 11.

50-38 was the final. The Gauchos kept it close until the waning minutes of the game.

Narbonne and Palisades are tied at 21 at halftime.

Palisades is doing what they do–slowing the game down, getting to the free throw line, and eliminating their foe’s sense of offensive rhythm. Narbonne has only won one game this year in which they scored fewer than 50 points.

Westchester jumped out to an early lead and never looked back. Ariana Grimes and Rylie Waugh combined for 33 points in a game that was never close. Despite missing time with a tweaked ankle, a hobbled Justina Graham finished with 17 points for Carson.

Westchester leads 33-16 at halftime. Carson F Justina Graham tweaked her ankle pretty badly in the first quarter and missed a chunk of time but knocked down a few shots upon returning to give Carson some life. Still, Westchester is firing on all cylinders.

Roosevelt won the third quarter 17-6 to take a 36-35 lead going into the fourth and held on to win 51-43. Jose Arellano led all scorers with 20 points for the Rough Riders. They only allowed a total of 14 points in the second half.

After both teams came out cold from the field and LACES took control in the second and third quarters, it seemed that a blowout was in store. Both teams successfully trapped full-court and Freshman guard Laila Salazar led an incredibly gutty effort by Marshall in the last ten minutes of the game to erase nearly a 20-point lead and cut it to three in the final minute.

But LACES’ Aliyah Pollard, who led the game with 19 points and appeared to spend minutes at every position throughout the game, had a couple more free throws left in her to ice the game with 1.1 seconds left. Salazar led Marshall with 18 points and nearly 10 steals.