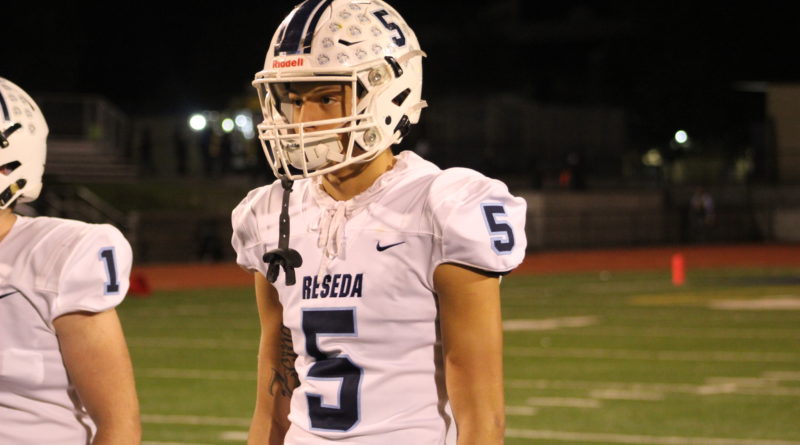 These 15 class of 2020 SoCal wide receivers range from consensus D-1 prospects to overlooked high school stars who have made strong cases to play at the college level. What they all have in common is that they are among SoCal’s best unsigned senior wide receivers. The list is broken down by section (Southern, L.A. City and San Diego).

*Please email lance@wpsblivest.wpengine.com with recruiting updates for any of these players.

One of the state’s most productive WRs still in the recruiting process, Holmes was top-25 in California in receiving yards per game with 116 despite playing some incomplete games due to injuries. He was also top-50 in the state in both receiving touchdowns (15) and receiving yards (1,160) without even playing in ten full games.

Holmes was also a standout kick returning threat and a strong track athlete who can blow by a defense in any manner that he gets the ball, with strong lateral quickness and footwork as well. He’s received strong interest from multiple D-1 schools but is currently still unsigned despite his massive per game production.

A 3-star WR who also stood out as a punt returner and defensive back, Williams now holds Paramount’s single-season records for receptions (64), receiving touchdowns (15), and receiving yardage (1,142). He was voted All-Division 4 and a huge part of Paramount’s semifinals run that nearly went all the way.

Additionally, Williams had some of his best games against Paramount’s top opponents. He had a combined 25 receptions, four receiving touchdowns, and 360 receiving yards against Bishop Amat and San Juan Hills, which is a strong indicator that his production could translate at high levels of college ball.

Playing one of the hardest schedules in the country, Moun played 11 games sharing targets with two D-1 WRs and a D-1 TE and still was second on Servite in receptions. His 421 receiving yards don’t pop out, but those who watched him know he was one of the better receivers in SoCal and easily a college-level receiver. The film shows it, with some insanely difficult catches in strong coverage.

Marton caught for a staggeringly large portion of the Eagles’ receiving production with 1,195 yards and 18 touchdowns–both were about 70% of the team’s total. He has been offered at the college level but remains unsigned.

One of the premier wide receivers in Ventura County, Lundring has received nine scholarship offers but remains unsigned for now. He was ninth in California with 129.3 receiving yards per game and top-50 in California with 1,164 yards despite playing in only nine games.

Lundring had to spend a lot of snaps in double-coverage against college-caliber DBs on a struggling team, and still put up huge numbers. His film shows that he’s an excellent route-runner with strong footwork, plus great hands to reel the pigskin in of course.

Not only was Ethan Leonard top-five in the state in receptions with 97, but he produced at that level on a team without any star running backs or other downfield threats. He was one of the keys to Hemet’s impressive run to the Division 11 semifinals.

Vaielua was a key member of a Cypress team that went undefeated all the way into the Division 7 finals. He caught for 1,109 yards and 13 touchdowns on a massive 22.6 yards per catch against a lot of college-caliber competition.

Kelley caught for 831 yards for the 2-8 Titans, which is strong but doesn’t jump off the page. But further inspection shows that he only played in eight games, meaning he went for 104 receiving yards per game. Additionally, he was the only deep threat on a team that otherwise struggled mightily in the passing game relative to excellent competition they faced routinely such as Citrus Valley, La Serna, Etiwanda, and Glendora.

Kelley showed up and showed out every game no matter who the foe was and did what he could to keep Colony in games when they were overmatched. Really he was one of the Southern Section’s better wide receivers last year and could’ve put up even bigger numbers under slightly different circumstances. But his production in his circumstances are more impressive than plenty of D-1 signees and make him a clear college-level prospect.

With 1,041 receiving yards on the year, Wyre was the top receiving threat in West Ranch’s outstanding passing game. He routinely produced against secondaries that featured multiple future college defensive backs while also shining as a DB and KR. His production combined with strength of schedule puts him in the territory of at minimum a strong D-2 prospect.

The one exception on this list, Stewart committed to a D-1 university, Arizona State, and recently de-committed to reopen his recruitment. He’s ranked as a 3-star recruit and has received roughly 20 total offers. So he’s not underrated or overlooked, but he’s still a standout WR who’s currently unsigned.

Another Gaucho receiver, East led Narbonne in receptions and receiving yards while sharing targets with four other D-1-caliber WRs. The nationally-ranked receiver has been offered at the D-1 level but remains unsigned.

One of two City Section champion and state-finalist Regents on this list, Rhodes led Reseda in receiving yards (968) and receiving touchdowns (10) on a ridiculous 27.7 yards per catch. That was despite playing in only 11 of their games and expending a lot of energy as a standout DB. Throw in some work at running back and as a returner and his offensive production is well over 1,300 yards. He’s received significant college interest but is still unsigned.

Another Reseda star, Martinez is widely considered a D-1 prospect but is unsigned for now. He totaled over 1,100 yards receiving and rushing while also doing major work at DB.

Aki was 18th in California in receiving yards per game with over 120 for Hilltop. He only played in eight games but still topped out at well over 1,000 all-purpose yards when factoring in over 100 KR yards. Additionally, in two of the three games in which Aki had less than 140 receiving yards, Hilltop blew out their opponent and pulled the stars early.