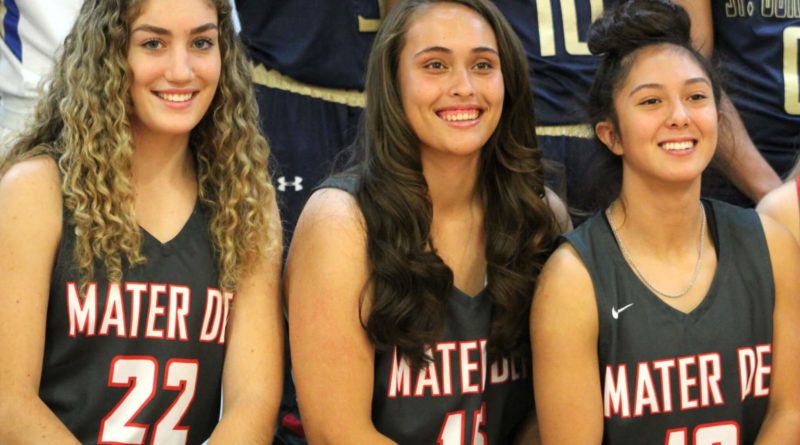 Windward will play for its third straight CIF Southern Section girls basketball championship on Friday at 5 p.m. The No. 2 Wildcats are the higher seed against No. 4 Mater Dei and have won nine consecutive games. But Mater Dei has won 13 straight, including knocking off No. 1 Sierra Canyon last Saturday, and has only lost two games all year.

Both of these teams are on a roll, playing as well as anyone in the state and showing no signs of slowing down. Here’s a preview of the Open Division title showdown:

How they got here:

These teams have routinely beaten the best teams in the country all year, so it’s easier to start with who they’ve lost to.

Windward got the second seed for a 22-4 regular season in which they only lost to Corona Centennial, Rosary Academy, an excellent Elizabeth Seton (Maryland) team, and Sierra Canyon a little over a month ago in overtime. The list of elite teams they’ve beaten this year, often in blowout fashion, includes King, Troy, Harvard-Westlake, Eastside Catholic (WA), Bishop O’Dowd, Clovis North, West Torrance (by 45), Fairmont Prep (by 41), Cathedral Catholic, Long Beach Poly (twice), Corona Centennial, and Rosary Academy. The latter three wins were in the playoffs. And the wins against Cen10 and Rosary Academy avenged half of their losses on the season.

That’s a pretty ridiculous resume, but Mater Dei had as good of a case for the top seed as they did the fourth. Now an unbelievable 29-2 on the year, Mater Dei’s only losses came to Long Beach Poly in overtime in December and Rosary Academy six weeks ago. Highlights of their regular season victory list: Bishop Montgomery, Orangewood Academy, Chaminade, Etiwanda, King, Troy, St. Mary’s (Stockton), Bishop O’Dowd, Archbishop Mitty, Sierra Canyon, Las Vegas Centennial, Harvard-Westlake, and Rosary Academy, in which they avenged their prior loss to them. In pool play, they defeated Etiwanda, Lynwood, and Sierra Canyon (for the second time).

Both of these teams are battle-tested with nearly unparalleled resumes and plenty of wins through adversity. It’s Windward and Mater Dei, so that’s what you’d expect.

Both teams have similar size and length, and both move the ball incredibly well. Neither have enormous front-courts that dominate the paint with size, but both teams have a strong spread of length from one through five and defend and rebound collectively within a team concept.

Windward is a little bit more athletic, and no team in the country can match up with their driving game featuring G McKayla Williams, W Michelle Duchemin, and F Juju Watkins. To have three players who are around six feet, or in Williams’ case, well over it, with the athleticism and guard skills to drive through a defense and finish in traffic? That might be something no other team in the country can boast.

When Windward is shooting well enough to spread the floor in half-court situations or getting out in transition, there’s nothing a defense can do when those girls are knocking down contested euro-step floaters. That’s not to say their offense is as simple as taking turns going off the dribble, because it’s not. Windward does a remarkable job turning stops into great outlet passes and finding open players in transition, and their offense is filled with player movement and interior passing. But their best players are slashers through and through.

Mater Dei is just a touch behind them in terms of physical attributes, especially on the perimeter, but they still have great size, including on the wing. While they can get out in transition quite well, their uptempo half-court offense is a well-oiled machine. They’re an exceptionally consistent shooting team so their spacing never collapses, they keep the ball hopping around, and they still have some very good finishers inside.

Star G Alyssa Frescas and F Brooke Demetre can both knock it down from deep, take someone off the dribble to finish inside, and set up teammates. With the ball in their hands, they are a touch less predictable in the half-court than Windward. They’re a bit more pick-and-roll oriented, and also go into the post a little more some nights with Demetre and F/C Mea’ali Amosa, but are so dangerous outside.

Windward has a few players who run the point, and star wing McKayla Williams does a heavier load of it than ever now as a senior. At upwards of 6-1 with length and athleticism to go with point guard skills, she’s a matchup nightmare. The worst part for defenses may be that they can defend her driving game perfectly for 20 seconds and she’ll still self-post for a bucket inside with the clock winding down.

How Mater Dei freshman PG Caia Elisaldez handles her will be one of the matchups to watch. One because it’s one of the top seniors in the country and a freshman who will be in the same shoes in threes years going at it. Two because Elisaldez is an outstanding defender and perimeter disrupter. She has solid size for a freshman point guard at 5-6 and the perimeter defense to give Williams problems, but whether or not Williams can simply score and pass right over her will be a major factor.

Another exciting matchup to watch is 5-star Mater Dei junior forward Brooke Demetre vs. Windward forward Juju Watkins, the top-ranked and outright most dominant freshman in the country. Both are upwards of six feet, especially Demetre, with Watkins averaging in the vicinity of 20 points per game and Demetre also a major scoring threat but often at her best in the role of a point forward. Watkins is strong and physical, but I’m curious to see if Demetre will take her into the post where she can both generate a solid shot and create inside-out for others.

Camryn Kiernan has very good size on the wing for Mater Dei starting at small forward with the ability to play shooting guard. She could also be a major factor in these matchups if she gets assigned to Williams or Watkins and can give them trouble.

The verdict: no favorite, no underdog, no hairs to split

Not only is there so little margin between these teams that I’m not going to even attempt to make a prediction, but there’s truly no favorite or underdog, which is a rarity. They are even in talent and size, they play fairly similar, and both have a mix of experience and youth. Most importantly, both have been playing their best ball of the year for weeks on end, and show no fear when the stage is at its biggest.