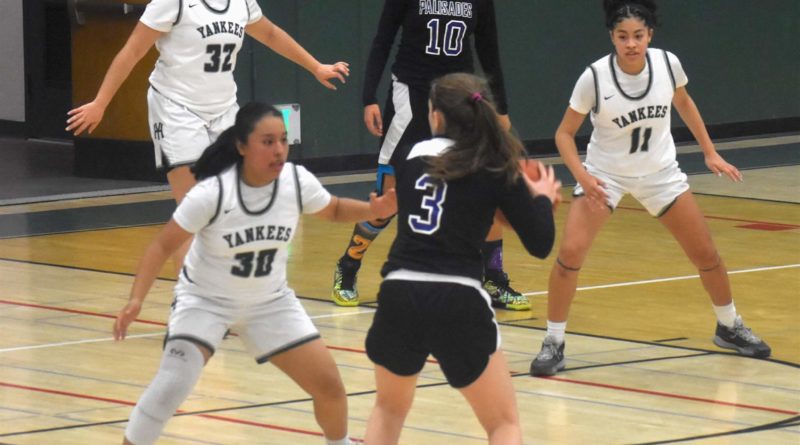 With Palisades defeating Granada Hills Charter 46-43 and Hamilton routing El Camino Real 60-38 on Saturday at L.A. Southwest College, the Western League rivals will see each other for the third time this season in the L.A. City Section Open Division girls basketball title game.

How they got here

No. 3 Hamilton came in second in the Western League and earned the third seed in the Open Division. To get to the finals, they first had to beat No. 6 Crenshaw while missing their best player, PF Kennedee Rankin. In her absence, they defeated the Cougars in a 59-55 thriller with Sherisse Chensam, Trinity Conner, and Sydney Blevins all in double-figures.

Rankin returned for Saturday’s semifinal against No. 2 El Camino Real, who many considered the favorite in that game. With Rankin at peak form with 28 points and the rest of the Lady Yankees still playing outstanding two-way ball as they did against Crenshaw, they routed mighty ECR 60-38 in a game that was never close. Right now, Hamilton is more dangerous then ever, making this matchup even more compelling than it already would be.

However, that doesn’t mean Palisades isn’t geared up for the challenge. Palisades locked up the top seed in the Open Division playoffs by defeating Hamilton 53-51 and 59-50 in league play en-route to a league title and undefeated regular season against City Section teams. They’re certainly the favorite to win it all on Saturday, even if the “spread” is only a few points.

The Dolphins blew out dangerous No. 8 Taft 45-19 in the first round and beat No. 4 Granada Hills Charter in a game that looked like a blowout until the Highlanders nearly came back late in the second half. Palisades is also playing at least as well as they did during their regular season victories over Hamilton, perhaps better. They are clearly the favorite, even if it’s only by a small margin.

X’s and O’s: Numerous similarities with a few big differences

Both squads do a lot of things well and have almost no glaring weaknesses. Great shooting, ball movement, reliable depth, and a physical/athletic edge are core to the identity of both teams. Both will spread defenses out with an abundance of strong shooters past the arc and move the heck out of the ball, passing up good shots for great shots.

The biggest difference offensively is that Palisades has the biggest inside threat in the section in F/C Jane Nwaba. And while they are by no means dependent on her for generating offense, they play through her more than the Lady Yankees play through any one player. Nwaba is only listed at 5-10, but the Pepperdine commit is long, strong, athletic, physical, and skilled on top of it all. She can take over a game with her post scoring and offensive rebounding while also draining mid-range jumpers with a hand in her face.

However, she’s often most impactful as a passer, and a gifted one at that. It’s no secret that defenses will collapse on her from the first minute of a game onward, and she’s three steps ahead of them on where the ball is going next–opposing coaches are forced to decide if she’s going for 20 points or close to ten assists. Even without her, Palisades is one of the best ball-moving teams in the section, but she puts them over the top as a scorer and inside-out facilitator.

Taking the ball out of her hands doesn’t work because Palisades has arguably the best back-court in the section as well with PG Alexis Pettis and SGs Sammie Arnold and Demoni Lagway. All three of them can shoot enough to consistently space the heck out of the floor, and all three of them can create. Pettis is a slashing point guard who can get inside and both finish and facilitate through traffic, while Lagway and Arnold are knockdown shooters who are also excellent as secondary playmakers. Ivy Scott, Rose Morris, and Taylor Arnold round out the frontcourt rotation and are all consistent finishers around the rim when given a good look.

On the other hand, Hamilton can’t create inside-out at will like Palisades can, but they are often even more dangerous scoring from the outside in. Not having any one player getting as many touches as Nwaba does can be both a disadvantage and an advantage because their offense is even more unpredictable than Palisades’ offense. By no means is Palisades’ offense anywhere near “predictable”, but Hamilton has a higher capacity to have four or five players on the floor who can create from scratch with no interior threat. Hamilton is also as good as it gets at turning a stop into an outlet pass and a great look in transition or secondary offense. It’s where they are most comfortable.

Rankin is a long power forward with the athleticism and attacking ability of a guard. She’s a nearly unstoppable slasher when she’s on, and is also deadly from mid-range, including off the dribble. She’s Hamilton’s leading scorer, but their scoring spread is overwhelmingly balanced.

Hamilton has an excellent back-court in Sherisse Chensam, Sydney Blevins, and Vanessa Cruz. They have a similar aggregate skill set as Palisades’ back-court, as all three are a threat to break someone down off the dribble, run a pick-and-roll, and drain shots from deep. Chensam was unstoppable against Crenshaw and pushes Hamilton to another level when she’s in attack mode at point guard. Cruz and Blevins are knockdown shooters at SG who have no problem creating.

PF/C Trinity Conner is probably the biggest X-factor on either side as a big who can also attack from the perimeter and often spread the floor five-deep to three. Some nights she’s a double-double and matchup nightmare, and some nights she’s not as aggressive. Also in the front-court rotation is Mary Townsend, a rim-oriented PF with good hands who consistently finishes good looks inside.

This is usually the part where we make a prediction, but I can’t. Not the way both teams have played so far in these playoffs. Palisades has been a little bit better on defense and the boards this season, but Hamilton has even more “explosion” potential when things click because they can manufacture threes so easily. Palisades is the definitive favorite by a couple buckets, but I’m not going to pick against either of these teams.