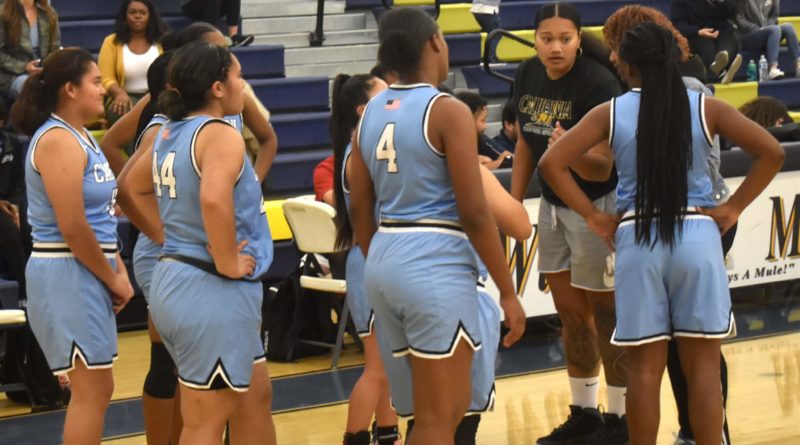 LOS ANGELES – Behind solid defense and 21 points from Justina Graham, No. 7 Carson defeated No. 3 Eagle Rock 51-36 at Wilson High School (L.A.) to advance to the L.A. City Section girls basketball Division 1 finals. The game was close until the very end when Carson got in rhythm offensively and kept Eagle Rock from doing the same. Here are three observations from the game.

Those who showed up on Tuesday saw the action start with Eagle Rock up 8-5 and Graham at the line for the Colts with 3:04 left in the first. That’s because this game started on Friday at a neutral site and then had to be postponed five minutes in due to issues with the floor.

Truth be told, this was a pretty sloppy game overall, but that’s what happens when games get postponed at the last minute. Particularly for high school student-athletes who have a lot on their plates. For instance, in the fall, the fires in the San Fernando Valley caused numerous football games to be rescheduled from a Friday to a Monday, and many of those games featured both teams playing some of their least impressive ball of the year.

Neither Eagle Rock nor Carson played up to their regular standard on Tuesday, but they were both willing to battle through game-long issues getting into rhythm, so both teams were affected equally.

Carson had a marked size advantage over Eagle Rock, and the Eagles also struggled to hit open shots anywhere on the floor. But with a lot of quickness from one through five, Eagle Rock made up for it with tenacious perimeter defense. They forced a lot of turnovers and kept Carson from getting into a rhythm, so Carson ended up with a lot of unforced turnovers as well.

Additionally, Eagle Rock did everything they could to battle inside. They did a great job packing the paint against Graham and co. while still rotating back to shooters. Because the Eagles are such a fast team, they were able to crash the glass hard on both sides while still pushing in transition and getting back in time on the other end.

On one of their roughest shooting nights of the year, they did a great job finding ways to hang around a team with the size to dominate them inside. While it was a disappointing end to an outstanding season, the Eagles went down competing.

Carson also struggled to convert both from the perimeter and at times inside until the fourth quarter. They did a great job getting to the free throw line in the first half, but finally in the waning minutes of the game they started hitting from mid-range and three while converting solid looks inside at a higher clip than for the first three quarters. In particular, PF Justina Graham knocked down a bevy of mid-range jumpers and PG Cassidy Castro had a couple daggers from the perimeter as well.

While Carson will have to play better across the board to beat Westchester in the finals on Saturday, it may give them confidence to get a win under their belts in a game where not much went their way. Against Birmingham in the quarterfinals, Carson had one of their best shooting nights from the field and avoided the excess of turnovers that nearly cost them in this one. If they’re going to knock off No. 1 Westchester, they’ll probably have to subdue some Comets runs. So, it was good to see them push through adversity while completely out of rhythm and still pick up the W to make the title game.