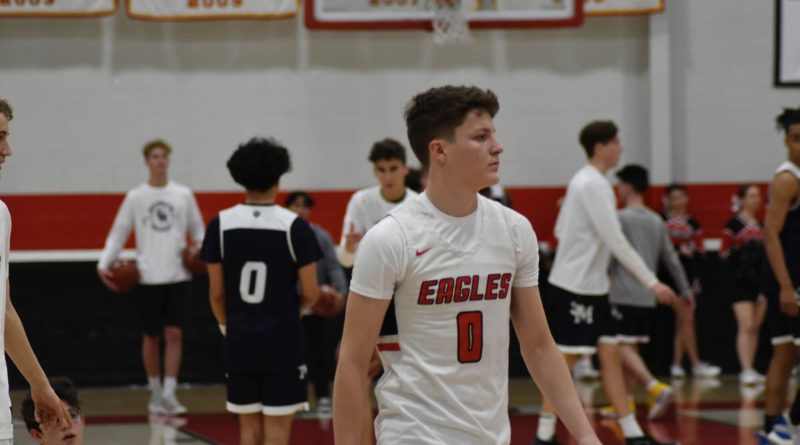 Santa Fe Christian led 12-9 after one quarter as both teams were sloppy on offense and failed to get much going. The Eagles were first to strike, scoring five quick points to open the second quarter, prompting a San Marcos timeout. The Knights recovered as the quarter went along and strung together their own run of 11-2 to end the first half and grab a 24-23 lead heading into the break.

It was Santa Fe Christian who struck first again in the second half with seven straight points out of the break. The Eagles pushed their lead up to nine points before San Marcos worked their way back and trailed 36-34 heading into the final quarter.

A three-point basket from Keatten Smith and a two-pointer from Hayden Gray gave Santa Fe Christian a lead of seven with 1:41 left to play before the Knights made one last effort.

Down by seven with 1:01 the Knights were forced to foul Santa Fe Christian and send the Eagles to the line. Santa Fe Christian proceeded to miss four consecutive free throws, three of them one-and-ones to allow San Marcos to creep back into the game.

A Christian Littlejohn layup cut the lead to two with 18 seconds remaining. Santa Fe Christian converted on one of two free throws to keep San Marcos alive. The Knights were able to get a clean look at a three from Dylan Sandles, but his shot was off and rebounded by Santa Fe Christian.

Hayden Gray was fouled with four-tenths of a second still left on the clock, giving him two shots. Gray missed both free throws, and the Knights were awarded a timeout with no time going off of the clock despite not possessing the ball. The officials talked things over and kept possession with San Marcos. The Knights had one last try to tie it, but Devon Arlington’s half court heave wasn’t released in time, ending the San Marcos season.

“I don’t think it’s feeling the pressure,” junior guard Keatten Smith said of his team’s late free throw struggles. “I think it’s just a rhythm thing, you know being out of rhythm a little bit.”

Santa Fe Christian is into their third division one championship game in the last four years, having won the title in both 2017 and 2018.

“It’s tradition and it’s culture, the older guys set this up years ago and we’ve always worked together,” Keatten Smith said. “And the culture is always good and culture wins championships.”

“It’s tradition and it’s culture, the older guys set this up years ago and we’ve always worked together, and the culture is always good and culture wins championships.”