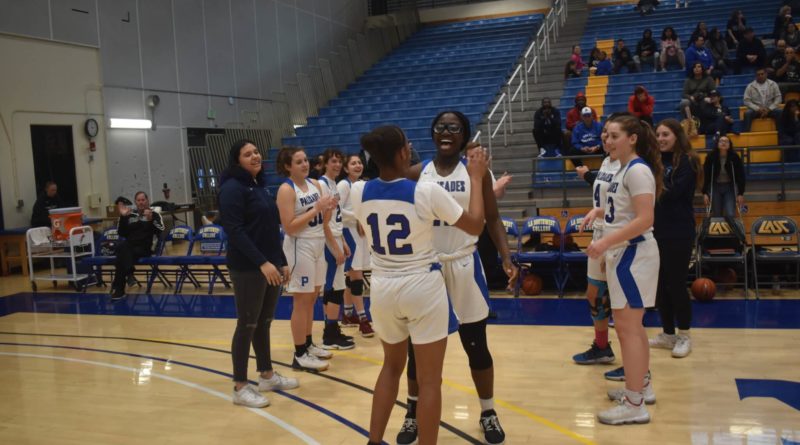 WEST ATHENS– Saturday at L.A. Southwest College, Palisades defeated Granada Hills Charter 46-43 to advance to the L.A. City Section girls basketball Open Division championship. Jane Nwaba and Sammie Arnold were both in double-figures for the Dolphins in the defensive duel. Here are three observations from the game.

The Dolphins needed a good chunk of the first quarter to get their feet planted and shake off the nerves. After trailing 15-6, it was a characteristically well-balanced attack for the rest of the game. Everyone who stepped on the floor for Palisades had a solid game one way or another in a game where they played great defense and held their own on the glass against the longest team in the section.

C/PF Jane Nwaba led them with 15 points in addition to numerous rebounds, blocks, and steals. G/F Sammie Arnold also had ten points, six boards, and five assists, and a big defensive imprint. PG Alexis Pettis had nine points and a handful of assists despite missing much of the first half after taking a rough blow to the knee. W Demoni Lagway and PF Ivy Scott also came up big on defense with a few buckets each, and PF/C Taylor Arnold had eight rebounds off the bench.

Granada Hills Charter started the game well and it ended it well. Palisades won the second and third quarters by just enough to hold off their furious comeback. After trailing 42-29, the Highlanders almost shut out Pali entirely for the last several minutes of the game and took them down to the wire. They appeared to be almost completely out of the game entering the final stretch and had the grit to go on an exceptional run to bring it to 46-43 at the close.

It’s a tough loss for GHC who spent much of the season playing the strongest ball in the section and is graduating an elite senior class. But they went down in extremely competitive fashion, and their two leading scorers on the game, Leena Vo (16) and Colleen Navasartian (10), are among numerous standout Highlanders returning next year.

While it’ll be a challenge for them to replace the likes of C Haylee Aiden, PF Samiyah Muhammad, and W Megan Delgado, they lose star seniors and develop their way into contention again every year. Next year will likely be no different. However, they have a can’t-miss rematch with El Camino Real on Tuesday for the bronze medal before the season is actually.

NO. 1 PALISADES THE TITLE FAVORITE COMING INTO FINALS

Palisades was the top-ranked team in the City Section to start the playoffs and they have already proven to have been the rightful first seed. Not only are they in the finals, but they are 2-0 this season against the team they will face there, Hamilton.

Hamilton seems poised to test Palisades even more than their first two meetings, which both came down to single-digits, but that’s a topic for another day. Right now, only one game separates the Dolphins from an Open Division title, and they’ll be the clear favorite going into it.