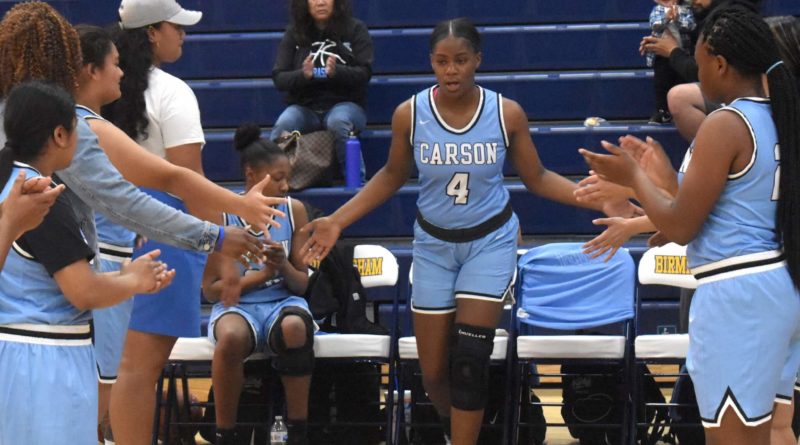 LAKE BALBOA – Carson pulled out a thrilling 66-65 road victory over Birmingham on Tuesday to advance to the L.A. City Section Division 1 girls basketball semifinals. Here are three observations from the game:

UNLUCKY MATCHUP FOR BIRMINGHAM, TOO MUCH JUSTINA GRAHAM

Coming into this game, Birmingham knew that they were up against arguably the scariest foe in the field in Carson. The Colts played fewer than 20 games coming into the playoffs which was likely their reason for only getting the seventh seed, but they had arguably the strongest season of anybody out of the Open Division. They only lost two games in league play to Narbonne by a total of 15 points.

Additionally, they were perfectly suited to cause matchup problems for Birmingham. The Patriots are adept at creating in the halfcourt and getting hot from the perimeter, and they also play strong perimeter defense. They don’t have the size and athleticism to fully match up with teams with dominant inside scorers.

Carson has one of the most dominant inside scorers in the section in F Justina Graham, who torched Birmingham for 29 points. Furthermore, with another reputable post presence to worry about in Kaelynn Carlisle and both starting guards Amiyah Hampton and Cassidy Castro having strong nights from the field–those three combined for Carson’s other 37 points–there was only so much Birmingham could throw at Graham. Graham is not only Carson’s leading scorer and rebounder but also the Colts’ assists leader on the season, and she successfully passed out of double and triple-teams all night.

THE SHOWDOWN DID NOT DISAPPOINT

While Carson is only the seventh seed in the bracket, the matchup was between our two top-ranked Division 1 teams all season, the two teams we considered the two biggest threats to win it all entering the playoffs. For that reason, we pegged this to be the best game of the postseason for the bracket, and it did not disappoint. Birmingham and Carson took each other down to the wire in a game between two teams that looked the part of the best in the field.

Even though Carson has two major tests left in order to win it all in Eagle Rock in the semifinals and most likely Westchester if they advance, they are now our sole favorite to take home the title. Both of those foes could plausibly beat them, as could King/Drew if they upset Westchester. Westchester in particular is battle-tested from the challenging Western League and looks scary right now. But we said that the winner of No. 2 and No. 7 would be our strong pick to finish the deal, and we are sticking with it.

Birmingham was one of the first teams out of the Open Division and likely a Division 1 finalist if not given a brutal early draw in Carson. They won one of their league matchups with El Camino Real by double-digits, and ECR is currently an Open Division semifinalist with a solid chance of going all the way. The fact that they lost in the Division 1 quarterfinals dramatically belies how good of a team they were this season, even with a little inconsistency.

While they were understandably devastated about such a tough loss, it will be fine going forward because the entire starting five and almost the whole core will be back next season–seven of their eight leading scorers were not seniors, to be exact.

The Patriots already have loads of talent and play very well as a team. Now they have an entire season to think about how they are going to improve as individuals and address the things that gave them problems in 2019-2020. In fact, another year of growing and getting stronger alone might make a huge impact for one of the City Section’s best undersized teams. The best is yet to come. And next year they have a chance to be the best of the best.