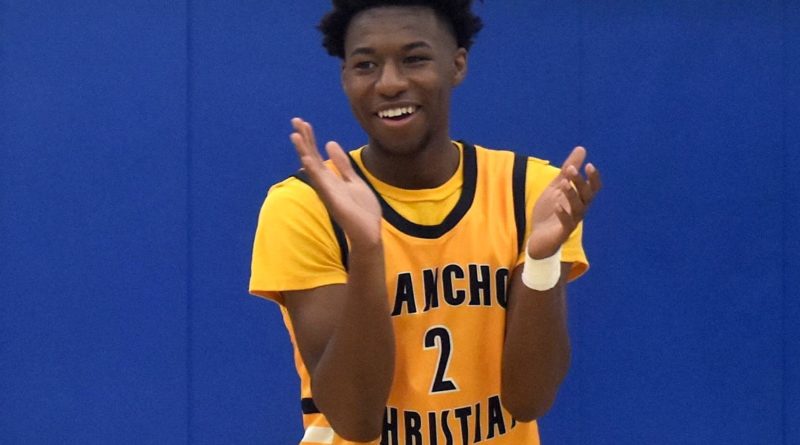 Over the next couple of weeks I’ll be taking a look at some of Southern California’s top high school basketball prospects from a scouting perspective. Next up? Rancho Christian combo guard Dominick Harris.

Harris doesn’t get quite as much hype as he deserves from playing on a stacked team with the top-ranked high school baller in the country, Evan Mobley, but the future Gonzaga Bulldog is a very high-4-star recruit and excellent NBA prospect down the road.

Harris is a 6-foot-4, 190-pound slasher with outstanding athleticism who has played both point guard and the wing throughout high school. He’s at his best attacking the basket in both halfcourt and transition settings, and finishing around, through, or over the defense like few other high school guards can.

Here are two finishes that he makes look insanely easy, and lead me to believe his finishing will translate at the highest levels.

I see Harris as a shooting guard prospect at the highest level who comes with a lot of the benefits of a point guard.

Some might point out that 6-4 slashers aren’t “in” at the NBA level right now, as the shooting guard position is almost entirely dominated by lankier spot-up shooters, at least in starting lineups. However, Harris’ three-point shooting is by no means a weakness or question mark – it’s a clear strength, including from well past the high school arc.

He’s a deadly and consistent shooter who can play off the ball. Brandon Roy was widely considered a prototypical “slasher”, but he was also one of the better shooters in the NBA, which only made his driving game more deadly.

Equally importantly to his draft stock as his ability to space the floor, Harris has the physical attributes of most 6-4 NBA shooting guards – long arms, great strength, and freakish athleticism.

I like him most as a shooting guard because when I’ve seen him play, he’s at his best and Rancho is at their best when he’s looking primarily to score. The fact that he’s not only a capable passer but a willing one – and one who’s happy to let his teammates take over entirely when they’re in rhythm – makes him all the better as a shooting guard. At the two, he will bring secondary playmaking and facilitation that a lot of modern wings don’t, while also being fully effective off the ball.

So, offensively, there’s nothing he can’t do. He is too athletic to contain off the dribble despite being such a deep threat that defenders are forced to guard him tightly, and converts at the rim like few others when he gets there. Harris is also a strong ball-handler, even if not the flashiest or most advanced one, who rarely turns it over and keeps his head up.

Strong intangibles across the board

The fact that he rounds out his athleticism and skill set with both constant aggression and a point guard’s ability to read defenses and make the right play is a major part of why I’m a huge fan of his game. And why I believe it will translate through college and at the NBA level.

To continue on about his intangibles, Harris plays with a high motor regardless of whether or not it’s his night to take 20 shots, and plays only to win. His energy is confident while grounded at the same time. You get the sense that he’d settle for 10 points per game if that was what it took to get wins, and he gets fired up for his teammates. That said, Rancho Christian does need him to go off to beat the best teams out there, and he gets it done. He’s a big-game player who has the clutch gene – just ask Sierra Canyon.

Unsurprisingly, Harris is a strong, committed defender. He spends a large chunk of games guarding the other team’s top perimeter threat, which is frequently another future NBA player, and he takes pride in doing a very good job. Harris is a little bit more explosive than he is laterally quick per se, which means he’ll probably be best served guarding wings than lead guards at the NBA level.

If he had the size of a lot of shooting guards out there, he’d clearly be a future stopper at the NBA level, and that’s where the 6-4 frame comes into play. But if his wingspan is in the 6-7 range, he will at least be able to hold his own defensively against many NBA wings while often torching them on the other end. And maybe he’ll be better than I think at containing the quickest of quick perimeter threats at the NBA level, in which case he could be a versatile asset guarding one through three.

But if nothing else, I’d expect him to be a strong defender in college and at minimum a serviceable one in the pros. Especially with his competitive fire, high basketball IQ, and commitment to doing whatever it takes to win. Even if his individual defense doesn’t fully translate at the NBA level, his willingness to defend in a team concept will.

Speaking of people named Harris, Zach Lavine and Gary Harris are two very different players who Harris reminds me of for very different reasons. I think his ceiling is a blend of the two.

Lavine is naturally a freakishly athletic slasher who became a devastating shooter as well, both spotting up and off the dribble. When Lavine is on, he’s an elite scorer at all three levels, and literally unguardable. Like (Dominick) Harris, Lavine has a significant background as a point guard, but is better off as a shooting guard who spends a lot of time with the ball in his hands. However, his point guard skills benefit him and his team every time he touches the ball. Dominick Harris has a similar scoring arsenal but with less of a tendency to settle for low-percentage shots.

Gary Harris is a solid scorer too, but his well-roundedness as a strong 6-4 shooting guard is where the comparison stems from. He’s an outstanding defender from one through three who doesn’t grab a ton of rebounds but consistently boxes out. Both Harris’s have the right kind of swagger about them, and a low center of gravity that keeps them effective against both bigger and laterally quicker matchups. If Dominick Harris can round out his game at the highest level with those components too, he will be a much more complete player than the term “combo guard” implies.