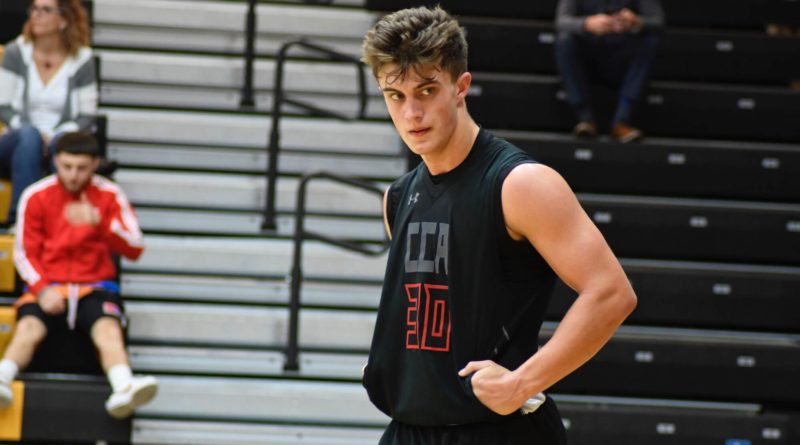 CARLSBAD — Canyon Crest’s Jon Pearson and Justin Lam combined for 29 points on Tuesday night to lead the Ravens to a come-from-behind first round playoff win over three-seed Army-Navy. The Ravens advance to play at 11-seed Scripps Ranch in the San Diego Section Division 2 quarterfinals on Friday night.

Below are three observations from the game.

Canyon Crest went 0-10 in Avocado West League play this season, but battled their way throughout, holding a halftime lead in many of those games against teams that all ended up in the Open/D1 playoffs. The Ravens hadn’t won a game since January 10th against Ramona.

“We play a tough schedule compared with others, although our record may not say it. We knew that they weren’t that much better than us,” senior Justin Lam said postgame.

Canyon Crest built their lead to nine in the middle of the fourth quarter thanks to two big three-pointers from Justin Lam. After an Army-Navy timeout, the Warriors picked up their play and worked their way back into the game.

Army-Navy began playing the foul game and forced Canyon Crest to the free throw line with under a minute to play. Canyon Crest proceeded to miss the front end of three straight one-and-ones allowing Army-Navy to cut the lead to just two points with eight seconds to play.

Justin Lam was fouled and headed to the line to shoot two free throws with an opportunity to seal the game for the Ravens.

“I’m not gonna lie I was definitely worried, but I knew I was gonna sink those two in. We needed those.” Lam said after finishing with 14 points and extending the Ravens season until at least Friday.

When the brackets were released on Saturday, division two looked like there could be parity throughout and it certainly delivered in the 1st round.

In addition to 14-seed Canyon Crest taking down Army-Navy, 11-seed Scripps Ranch won at Oceanside and in the biggest shocker of the night, the one-seed Bonita Vista lost to 16-seed Point Loma.

All eight games in the division were decided by nine points or less with the lower seeded team winning half of those.