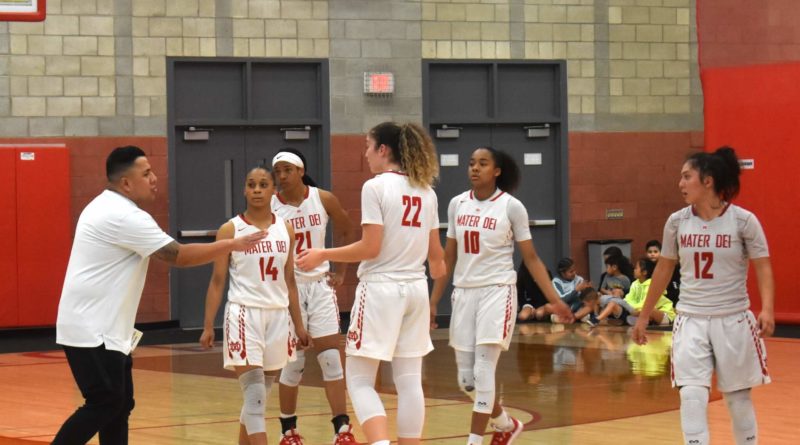 SANTA ANA–Mater Dei led nearly all game in their 54-50 victory against Etiwanda to open the playoffs. Their lead never got past two possessions, but they didn’t need much of a margin for error to hang on against a formidable Eagles team. They’ll have a great opportunity to move to 2-0 in pool play on Wednesday against another heavyweight in Lynwood. Here are three observations from the game.

While both the Monarchs and Eagles can do just about everything very well on a basketball court, they play fairly different styles of basketball. Etiwanda has great size in the frontcourt and guards who excel at breaking down defenses off the dribble, so they play a lot of one-on-one ball within a team concept. That’s not to say they don’t move the ball well, because they absolutely do, but Mater Dei’s phenomenal execution of both ball and player movement in halfcourt sets really stood out in this game.

Star wing Brooke Demetre can lead a game in scoring on any given night, but was really looking to get teammates open in a point forward role in this one for Mater Dei. She’s great at driving to the rack under control and drawing an extra defender or two and knowing exactly where the help is going to come from. She finished with eight points and a lot of assists, as did PG Caia Elisaldez.

JOY CAMPBELL KEEPING ETIWANDA IN IT

Etiwanda PG Joy Campbell was arguably the best player on the floor, leading both teams with 19 points and setting up her teammates as well. She was a disruptive perimeter defender and instant offense whenever her team needed it, especially in situations when it seemed like Mater Dei was going to start pulling away. She was great all game and hit a couple clutch jumpers and floaters down the stretch to give the Eagles a chance until the very end.

THE BEST IS YET TO COME FOR MATER DEI

The Monarchs have only lost two games all season, once in overtime to Long Beach Poly and once by ten points to Rosary Academy, who they beat the second team in league play. They are a full-blown contender for any title hunt or status as the best team in the country even though they’re somehow only the fourth seed in the section this season. They have a very solid chance at winning it all this year to be sure.

Either way though, what’s crazy is that they’re likely to take yet another leap next year, perhaps a significant one. That’s scary for everyone else in the country. Mater Dei’s young talent was on display in this one, just like every other game, and almost their entire core is returning next year. That goes for junior Alyssa Frescas and freshman Meaali’i Amosa, who led the Monarchs with 16 and 15 points, respectively, in addition to Demetre (junior), Elisaldez (freshman), sophomores Soleil Montrose, Lani White, and Jamie Mackay, and a host of other strong players.

Mater Dei is about as good as it gets as it is right now, and is already set to get better and better for years to come.