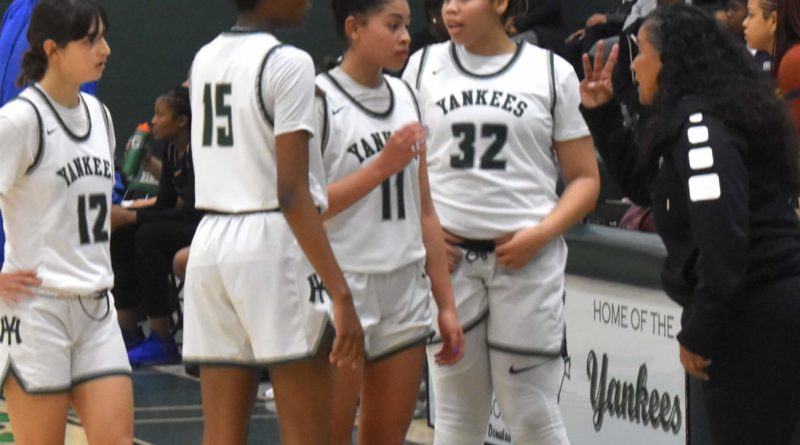 LOS ANGELES– The Lady Yankees defeated Crenshaw 59-55 on Thursday in a nail-biter of a City Section Open Division quarterfinal. It took one of their gutsiest efforts and better shooting nights of the year to overcome the absence of star forward Kennedee Rankin, and they briefly lost the lead in the waning minutes of the game before pulling it out in the last minute. Here are three observations from the heated duel.

The paint battle was a major potential concern in this game for Hamilton. They don’t have the most size or length to begin with, whereas Crenshaw has multiple impact bigs upwards of six-feet tall plus significant length around the perimeter. Throw in the absence of Rankin, a long, athletic combo forward who’s likely their best rebounder, and on paper there was a chance the Lady Yankees wouldn’t be able to match up inside.

Not only did they survive around in the paint–Hamilton won the rebounding battle and did a better job protecting the rim without fouling. Their starting frontcourt of Trinity Conner and Mary Townsend led the whole squad in making a spirited effort to crash the offensive glass without giving up too much in transition. Conner finished with a 14-point double-double.

In addition to drawing fouls at a high clip on drives, it was second-chance points that kept Hamilton in slight control of the game for most of the night. They essentially held a one or two-possession lead, but no more, the whole game. In fact, they benefitted extra from their work on the offensive glass because they take a lot of threes–O-boards frequently lead immediately to open threes, and also, getting repeated looks from deep help shooters snap out of cold streaks and start hot ones.

PG Sherisse Chensam led both sides in scoring with 19 points in addition to a handful of both assists and steals. Her performance as a whole was clutch, and she also hit a wild and-one to tie the game and free throws to clinch it in the last minute.

If Rankin returns and Hamilton keeps firing on all cylinders, they will really have a great shot at a title. Their shooters were in rhythm and they were rebounding very well on both sides. If they can keep both of those going for two more games, they’ll continue to be tough to beat, especially if/when Rankin returns.

It was an outstanding year for Crenshaw, nearly making the City Section Open Division semifinals and winning every league play game by astounding margins. And it’s not over yet–the Cougars look like the favorite to win two more games in the consolation bracket and a top-five finish in the City Section.

Equally importantly, Crenshaw is in excellent shape going forward, with PG/SG Ameerah Ali, Ws Payshance Walk and Keyona Mays, and C Payton Walk all returning. With that quartet alone they will be in the hunt again for an Open Division title.