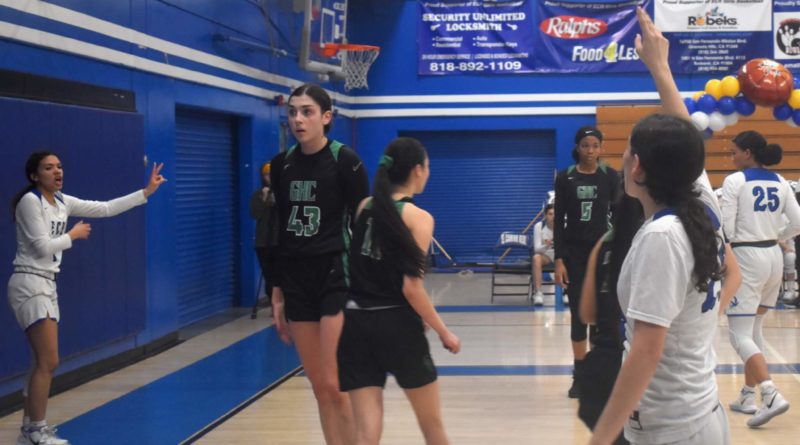 With the playoff brackets announced for the L.A. City Section girls basketball playoffs, it is clear that the Open Division is going to be madness. Every single team in the eight-team field has a shot.

Here is a look at the top 23 players in the Open Division:

Arguably the top player in the City Section in 2019-2020, Nwaba is the most physical inside threat out there, and sets the tone as an undersized center. Not only is she a threat to go for 20/10 every night while defending inside, but she’s an elite passer for a post player.

Pettis is an athletic slashing PG who excels at the drive-and-dish game. Her physical edge even in the backcourt is a big reason Palisades is able to set the tone physically against taller, longer foes on a regular basis.

Arnold does a bit of everything for Palisades. She’s a prototypical 3-and-D wing, but also a strong secondary playmaker with a high basketball IQ.

Another versatile perimeter player for the Dolphins, Lagway is possible the City Section’s best spot-up shooter in the C/O 2022 and also a strong passer and defender.

Another strong contender for City player of the year on this list, Saidoff is the most polished perimeter scorer in the Section and also a selfless playmaker. She’s a floor general on offense, and on defense she uses her high basketball IQ to lead ECR’s turnover-inducing press. Saidoff sets the tone with her toughness despite playing a finesse-centric game that includes knocking down deep threes.

Camua has the size to help undersized ECR battle with longer teams, and the guard skills to make their stretch offense much more dangerous as a de facto PF/C.

Another one of a handful of tough, versatile guards on El Camino Real, Privado can score at all three levels and set up teammates.

One of the most versatile players in the Section, Rankin has seen minutes at every single position for Hamilton. She’s probably most natural as a slashing small forward, but she has the size and athleticism to guard all five positions and rebound.

Hamilton’s identity is having a lot of versatile athletes who can get really hot from deep. Blevins is a big part of that as a strong threat to knock it down from three who also brings an athletic, physical edge to the wing.

Their offense is egalitarian in nature, so very few players routinely have to carry a heavy scoring load, making it hard to single out more individuals on a team deep with talent.

Another City Section MVP candidate and also the frontrunner for section DPOY if the award existed, Aiden averages a double-double and is dominant at protecting the rim (3.6 BPG) without fouling. Team rarely let the California Baptist go to work in the paint offensively for four whole quarters, so she punishes them by passing very well from anywhere in the post.

The other half of the best frontcourt in the section, Muhammad is the best offensive rebounder in the City Section, another shot-blocking threat, and a strong high-low passer. She doesn’t take a lot of shots but she has a good knack at creating good looks by slipping and establishing good position inside.

A two-way wing with a good feel for the game, Vo is a strong defender who forces a ton of steals and gets easy looks in transition. She can knock down shots as a spot-up shooter but has a good sense of when to take it inside.

Delgado is an excellent perimeter defender. When she’s knocking down threes, she’s one of the very top two-way wings in the City Section.

The leading scorer on undefeated (in league play) Narbonne, Nwosu does most of her damage inside and is also a strong passer and rebounder for a SF/PF.

Castaneda is easily the best perimeter shooter on Narbonne and a disruptive defender.

In addition to threatening for a double-double on any given night, Dufresne is one of the best defensive players in the City Section with 3.5 blocks per game.

Since Ali and Watkins are in the same exact boat on paper, we gave them the same slide. Both are 5-7 combo guards averaging upwards of 18 points per game in addition to about 3.5 assists and rebounds and four steals per game as well. Based solely on sheer production, they form the top backcourt in the section with room to spare.

Another Cougar with huge numbers, Powell averages over 11 points and boards a game in addition to turning away multiple shots.

Watson leads the Tigers in all five base statistics with 10.8 points, seven rebounds, 4.1 assists, 2.2 steals, and roughly a block per game.

Lopez is one of numerous other Tigers who makes a big offensive impact every night. She’s second on Legacy in points, assists, and steals.

Not only is Quintana the leading scorer and top player on Taft and one of the best in the City Section, but she’ll be back next season.

Callejas is another key to Taft’s versatile frontcourt that causes matchup problems for just about everyone.