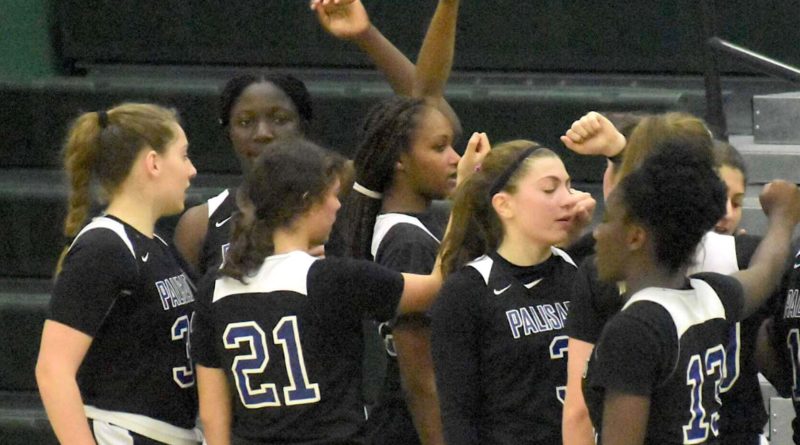 Here are Scorebook Live’s Top 10 rankings for Los Angeles City Section high school girls basketball for the week of Feb. 10. These are our final rankings of the regular season. We will release year-end rankings once the playoffs are over.

The Dolphins finished the season as the clear top team in our power rankings after going 12-0 in the very challenging Western League. They dropped a tuneup game by 23 points on Tuesday against Orangewood Academy, but that’s not an indictment in any way of how good shape they’re in going forward in the City Section playoffs.

However, in the Open Division, seeding hardly matters because this year all eight teams in the field are legitimate championship contenders. Absolutely nobody on this list wants to see Taft in the first round, and that’s who Palisades has to deal with on Thursday. After that it’s the winner of Granada Hills Charter and Narbonne should they win–there is no rest for the weary.

If winning a lot of close games in the regular season bodes well for the playoffs, which it often does, El Camino Real is in great shape. They finished league play winning three straight single-digit games against Granada Hills Charter, Taft, and Cleveland, and as a result snagged a tie with Granada for a league title in the West Valley League, the most competitive league in the whole City Section.

Beating Cleveland by only six points to end the season is the only yellow flag. Cleveland is a strong team and a serious dark horse contender to win Division 1, but Taft, GHC, and Birmingham all blew them out–badly at times–in both league play matchups. ECR had trouble putting them away twice, although what counts the most is that they got the job done.

ECR drew Legacy in the first round. Legacy has been a little unpredictable outside of league play, but they stormed their way to an undefeated league title. The Conquistadors have a clear, albeit small, edge on paper, and would face the winner of Hamilton and Crenshaw if they move on.

The Highlanders sputtered at the end of the season, dropping two of their last three games narrowly to Taft and ECR–both of whom they might have to face in the playoffs if they can beat steaming-hot Narbonne.

Will those losses–their only losses in City Section play–help them address weaknesses for the playoffs, or take the wind out of their sails? We will find out Thursday.

While four through eight is nearly a complete tossup this week, fourth is the highest ranking of the year for the Gauchos, and they are peaking at the right time. Carson was the only team in their league who could push them, and after only beating them by four the first time in league, they beat them by double-digits on Wednesday.

Narbonne versus Granada Hills Charter is must-see TV in round one. A few weeks ago, Granada would have been the overwhelming favorite, but now Narbonne has a major edge in momentum.

Just like Narbonne, Crenshaw just completed an undefeated run through league play and is up against a higher-seeded team from a stronger league who struggled a little at the end in Hamilton. The Cougars mixed in a couple non-league matches against Southern Section teams during league play to stay fresh, and had respectable losses against St. Bonaventure and Alemany. Because no team in their league could contest them, they are a major wildcard.

Speaking of teams that peaked at the right time, the Toreadors got the last seed in the Open Division and are a serious threat to win it like all other teams in our top eight. They went 5-1 in their second go-around of league, nearly beat El Camino Real in their sole loss, and upset Granada Hills Charter to end the season which may possibly have been the difference between making and missing the Open Division. Sixth is their highest ranking here all year.

That said, it will be an uphill climb, but that’s the case with everyone in the Open Division. If top-seeded Palisades has been tuned in to Taft’s huge resurgence late in the season, then they are not much more excited to face Taft than Taft is to face them. If Taft were to pull off the upset, they’d quite possibly be the strongest candidate to win it all going forward.

Seventh is the lowest ranking of the year for the Lady Yankees because of a very surprising loss at the end of the year to LACES, who resultingly just became our top candidate to win Division 2.

This is still the team that beat Westchester by 23 the prior game and played Palisades to single-digits in both league matchups–they are still a legit championship contender if they play their best every night. Hopefully the three-point loss to end the season was a learning experience to help them get to 100% for a postseason run.

Let it be clear that Legacy could just as easily be top five, because as we said, fourth through eighth is basically a tossup. The Tigers swept the Eastern League which included beating a strong South Gate squad with room to spare twice.

They were very unpredictable in non-league play and did lose to another undefeated (in league) City Section team in Narbonne by 23 just last month, which may have been a factor in only getting the seventh seed in the Open Division playoffs despite their 12-0 league run. But when all eight teams in the field are title contenders, the seventh seed means almost nothing. El Camino Real is probably exactly who they want to see in the first round, but their opportunity to prove that they’ve been slept on officially starts this week.

The Patriots got fourth in the mighty West Valley League, where fourth is actually a real accomplishment. To get there, they beat a solid Cleveland squad twice (once by 43 points), blew out Chatsworth twice, and upset El Camino Real by 13 points in their second meeting. They also very nearly knocked off Taft in both of their matchups and at least avoided getting blown out by Granada Hills Charter despite losing both meetings by double-digits. Along with Carson, they are our pick to win Division 1.

While there are a number of teams in the Division 1 playoffs who could knock them off, including Carson, Westchester, and Garfield, they will have an edge in having held their own in their brutal league gauntlet from start to finish.

Speaking of Carson, they were a four-point loss and an 11-point loss (both against Narbonne) from sweeping the Marine League and snagging a top-five or so spot at this time of year in our rankings and the Open Division. Instead, they’re all the way down at seventh in the Division 1 field, which is by no means something to be ashamed of but it’s really surprisingly low for them. To make matters worse, they’ll face Birmingham in just the second round out of four should both teams win in round one.

The Colts have been slept on, and surely they’d agree, but it’s on them to back it up. The playoffs are here which means the opportunity is waiting for them. An 80-7 victory over Gardena was a nice way to close out the regular season.