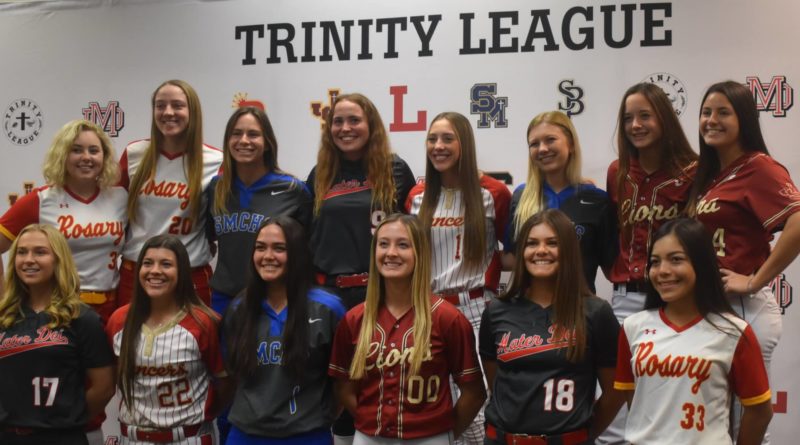 SANTA ANA– The 2020 Trinity League Softball Media Day took place Tuesday morning at Mater Dei. The event featured press conferences for all five softball programs in the league and brought tremendous insight into the outlook of some of the premier softball programs in SoCal.

Here’s what we learned from every team in the order in which they took the floor.

Rosary Academy: Time for growth to translate into wins

It’s been an uncharacteristically rough couple years for Royals softball, a traditionally strong program, and they know it.

While Rosary Academy has had many years of success over the decades in softball, even against the rigors of the Trinity League and SoCal/Orange County softball as a whole, the last two years they’ve gone 1-15 in league play and missed the playoffs. Right now they’re starting the 2020 season as the bottom-ranked team in the league, and that’s ok with them if their combination of new talent, individual development, and overall team growth translates to the field as expected this season.

There’s plenty of reason to believe that this year will bode major progress. Head coach and athletic director Tom Tice pointed out that enrollment took a dip for a few years and that significantly affected their turnout, but now all of it is on the way back up. (This year’s varsity squad has 18 players instead of 14, to be exact.)

Softball isn’t like basketball or football where elite prep schools can usually fill most voids through fortuitous transfers/freshmen and sheer abundance of talent. Young players often have to be developed from nearly scratch. The Royals just didn’t have the mix of young raw talent and experience of star veterans for a couple years. Last year’s roster had one senior, three juniors, one sophomore, and nine freshmen.

But this year, Rosary Academy’s talented freshmen class from last year will be returning as sophomores, and they do have some impact freshmen and transfers–particularly in the pitching department, which was a primary struggle the last couple of years. Throw that in with their talented core of upperclasswomen featuring some key seniors, and the Royals are confident that they’re going to make the strides they want to see.

Last season, the Eagles finished tied atop the Trinity League standings and finished 25-4 on the year. That included making the Division 1 quarterfinals and losing by only one run to Great Oak, who went on to lose 2-0 to formidable Norco in the finals. There was not very much separation from Santa Margarita and the top of the top.

This season, the goals are still as high as ever even though coach John Fitzpatrick and his squad are ready for increased competition. They share the same belief of all the media day attendees that Orange County, and likely the Trinity League itself, will see an uptick in competitive parity this season.

Coach Fitz spoke about what he refers to as the three F’s that he values instilling at Santa Margarita–faith, friendship, and fundamentals. It can easy to talk the talk, but it’s something all the players completely buy into, and they believe that their interpersonal bond as a team gives them an edge. They have a talented core of vets who have not only been dominating on the field for a long time together but friends off of it for most of their lives.

“Chemistry is more important with girls,” said coach Fitzpatrick. If he had to quantify it, he’d guess that at minimum, “Being cohesive is…worth three to five more wins per year.”

New head coach Sean Brashear joins a talented team of Monarchs filled with seniors who are both decorated for their success already at their time at Mater Dei while also not being happy with last season’s first round playoff exit. They see their identity this season centering around toughness and competitive fire, qualities that Brashear quickly pointed out that he really appreciates in the roster he’s taken over.

They’ll need it in a year filled with both challenges and major opportunities, and a lot of pressure to send their outstanding C/O 2020 off on the right note. Coach Brashear and his players are embracing that identity.

“We have 8 seniors on the team, we’re all really hungry to win,” C/2B/UI Hannah Jacobsen said, echoing her new coach’s outlook.

As usual, Mater Dei has enough talent to make a lot of noise. Coach Brashear is by no means inheriting a project–he knows that they have an established group of talent that has already been producing for years. In fact, there might even be some logjams of talent to navigate, including an overflow of top-end pitching talent. And some star players will be playing out of their accustomed position, which is no small deal for a team with a plethora of future high-level college players.

Additionally, coming from coaching prestigious public school softball programs in the Inland Empire in Chino Hills and Roosevelt, he’s fully aware of the target that Trinity League teams and Mater Dei in particular have on their backs, and all the pressure of the situation.

All of that is why to him, getting that group as far as he can in year one carries significant weight.

“It’s a great challenge,” he said, elaborating that an opportunity to meet all these challenges was part of what allured him to the Mater Dei opportunity.

Despite coming in fourth in the Trinity League and missing the playoffs, last year was in many ways a very successful one for JSerra. On paper, the Lions were the best they’ve been in at least a few years, as they are coming out of a long rebuilding phase. Head coach Katie Stith took over last season but feels like this is her first full season as their coach whereas last year she took the reins in December, which is not enough time for a coach to put their full stamp on a team before the start of the season.

Still, they did enough to get bumped up to Division 2 from 3 last year, and they were in Division 4 the year before that. Now that a few years of transition and rebuild are over, just being a middling team (relative to their elite competition) is not going to be enough for JSerra to be satisfied this year.

This season is about changing their approach from one of a rebuilding team to one of a contender, filled with ambition and competitive fire. The Lions want to compete for a league title, make the Division 2 playoffs, and make noise when they get there. Completing the change of mindset through and through could potentially go hand-in-hand with the results they want on the field as early as this year.

It’s no secret that OLu is one of the premier softball programs in SoCal and all of the country every single year. Last year they fell to eventual undisputed national champion Norco in the Division 1 quarterfinals in a year that they graduated seven seniors who are now playing college softball.

The Lancers are no longer near the top of the shortlist of overwhelming preseason favorites–well, not quite as much as usual–and they know it. But that doesn’t mean they’ll settle for anything less than contending at the highest level out there.

Last season they “felt the target on [their] backs from day one,” said head coach Miklos. But he believes they can balance an underdog mentality with still setting specific, lofty goals–an intentional focus of Orange Lutheran’s program–without sacrificing their ambition, confidence, or competitiveness. While the talent level might not be quite what it was in years past, it’s not exactly lacking.

“It’s cool not to have a target on our back,” said shortstop Victoria Fragoso. “I’m excited to be an underdog. I think we’re going to be a very scrappy team this year.”