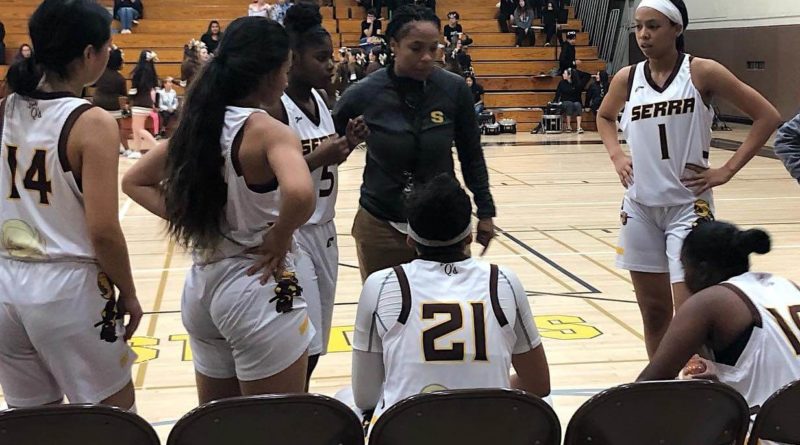 It was a very interesting week in the San Diego Section, but there wasn’t much movement in the Top 10 rankings. The only change is last week’s No. 9 team Serra upset No. 8 Westview, so they flip flopped spots this week. La Jolla Country Day & Cathedral sealed up league titles, while a few other leagues will come down to the final games this week.

Te-hina Paopao received her McDonald’s All-American jersey this past Friday, and guess who was in the house to present her with it? Another former McDonald’s All-American and former Torrey Kelsey Plum. The Torrey’s won both of their last week by beating two top ten ranked teams. The first game saw the Torrey’s down #3 Bonita Vista 69-40 and then they came back on their senior night to beat their long time rival #4 Bishop’s 81-45. The Torrey’s won the Coastal league with the win and  will be the #1 seed in the Open division playoffs come out this weekend.

The Dons went 2-0 last week by defeating Mira Mesa 66-18 and then beat league rival Christian 65-52. Cathedral wrapped up their second league title in a row. This team will definitely challenge La Jolla Country Day for the Open Division title.

Bonita Vista escaped a huge upset this past Saturday against a very game Mission Hills squad, but the Barons held their composure and squeaked out a double overtime win 75-74. Bonita Vista went 3-1 last week losing to #1 LJCD 40-69 , but bounced back and won 3 straight. Beating Montgomery 85-24, Olympian 66-23 and like we said before Mission Hills 75-74. The Barons have a key match-up against Mater Dei Catholic which will determine the league championship.

The Knights went 1-1 last week dropping to #1 La Jolla Country Day 45-81, then came back to defeat #10 Mt. Miguel 74-41. Bishop’s is looking to make a statement in the Open Division playoffs.

Christian couldn’t come up with the win against its rival Cathedral Catholic suffering a second loss of the season to the Dons 52-65. The Patriots did beat a very scrappy Scripps Ranch team by the score of 68-57. Christian will get a chance to avenge an early loss against Serra this week.

Quietly the Mavericks are making a push to being one of the best teams in the county. They went 2-0 this past week in beating Canyon Crest and San Marcos. LCC will be a top four seed in the Open Division if they don’t slip up this week.

Nobody wants to play the Lady Q’s. Former McDonald’s All-American is coaching Serra up as the regular season is coming to an end. Serra went 2-0 this week beat Scripps Ranch 61-53 and then had the upset win over previous #8 Westview 52-48. The Lady Q’s are a real threat in Division I.

Westview lost its second game of the year this past week to previous #9 Serra 48-52. The Wolverines still stay in the top ten and are still at top three seed in the Open Division. Going 1-1 last week Westview did have a huge league win over Rancho Bernardo 41-38. With two more league games the Wolverines are looking to win the league championship.

The Matadors went 1-1 this week avenging an earlier loss to El Capitan with a 40-37 win to tighten up the league championship race, but then were downed 74-41 by #4 Bishop’s. Mt. Miguel stays in the top ten for now.