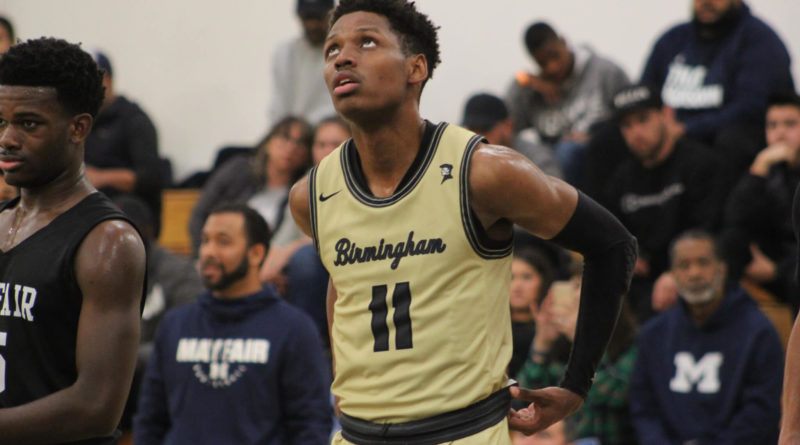 The LA City Section boys basketball playoffs begin on Wednesday with play in games. First round action will be played on Friday, with the exception of the Gardena vs. Birmingham game in the Open Division, which will be played on Thursday. Scorebook Live California reporter Connor Morrissette breaks down each playoff division below.

Rationale: Birmingham has won nine games in a row. The Patriots have overcome their mid-year slump that saw them lose six straight from the end of December into January. They didn’t look like an Open Division team during that stretch, they look like the favorites now.

I would take David Elliott and Corey and Elisha Cofield over any other trio in the City. With James Nobles missing time with injuries, it’s been those three that have propelled Birmingham from 0-2 in the West Valley League to 8-2 and co-league champions. This group gets better when the lights get brighter and I expect primetime Birmingham to emerge from the field to win the Open.

Injuries have really hurt El Camino Real this season. The Conquistadors have been without big man Ben Todd and starting point guard Amyr Henry for weeks. They finished a very respectable 6-4 in the West Valley League, but I think Fairfax has too much depth. Keith Dinwiddie, Justin Gladney, Justyn Hunter, DJ Dudley and Barry Wilds Jr. should push the top ranked Lions into the semifinals.

I’ve already tipped this pick; I like Birmingham. I’m a big fan of Gardena’s Michael Frankling and Chris Page, but the fact that Gardena beat Granada Hills by just two and Birmingham beat them by double digits twice gives the Patriots the edge.

No. 7 Washington Prep vs. no. 2 Westchester

I think we see an upset here. I see this game being very tight, but I think Washington will be able to close it out. That’s what I saw them do at Damien and I didn’t see that from Westchester in their second meeting with Fairfax when they led by 18 and lost. Look for Washington’s D’Anthony Ward to make a clutch bucket down the stretch for the Generals.

This is the toughest game to pick in my opinion. King/Drew has been more consistent this season overall, but Taft has Ramel Lloyd who is capable of going off for 30 points on any given night. I really like how King/Drew plays defense and I think the fact that they’re at home will give them an edge.

Rationale: I feel like I have a better chance of winning the lottery than guessing the Division 1 champion correctly. I could see any of the top six teams getting hot and winning. Led by senior Rodney Bradley, View Park has wins over Alemany, University and Narbonne. On paper, they could beat anyone in the Division 1 field; they don’t have any head scratching losses like some of the other top seeds do. I’m looking for Deon Coleman’s team to ride that consistency to a title.

My four semifinalists are View Park, Granada Hills, Grant and University. Those are the top four seeds, so that’s not exactly going out on a limb, but Palisades has already lost to University twice and I think Grant will be too much for Narbonne. From there, it’s wide open…

No. 1 Chatsworth and no. 2 Poly are the two clear best teams in this Division. They should meet in the championship game. Led by senior guard Quadre Johnson, I think the Parrots will win it all avenging their loss in last year’s title game to Roybal.

Arleta won the Division 4 title a year ago and now they’re the top seed in Division 3 this season. Jefferson, the co-Exposition League champion, is no. 2. Look for no. 4 Mendez to potentially make a run.