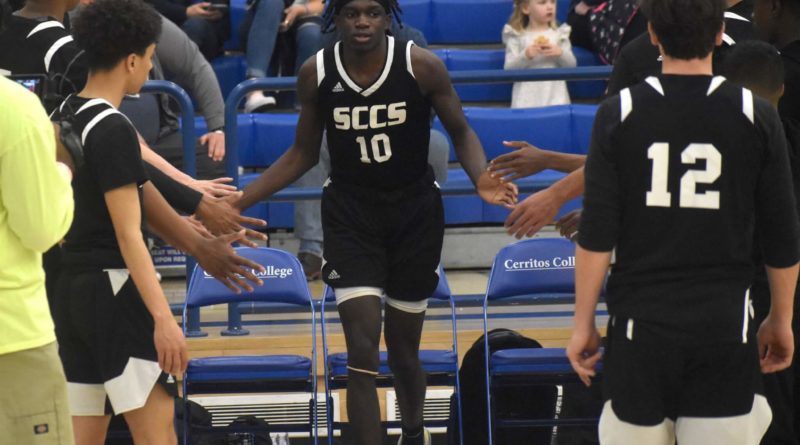 NORWALK– Saturday at the SoCal Finale at Cerritos College, Santa Clarita Christian pulled away in the fourth quarter to defeat San Gabriel Academy 63-52. Ty Harper led the Cardinals with 15 points, and Josh O’Garro added 14 points and a game-high three blocks. Here are three takeaways from the game.

It is not common that either of these teams faces another that can match up with them as far as size goes. San Gabriel Academy has a front-court of 6-10 C Boubacar Coulibaly and 6-9 Alassane Sene, who are not only as tall as an NBA big tandem but are extremely long. 6-7 JT Langston also has great size for a wing.

Santa Clarita Christian isn’t quite as big in the front-court, with a 6-8 PF in Kaleb Lowery and a 6-7 SF in Caden Starr starting at center and power forward. However, they have more size in the backcourt/wings, with Ty Harper, Kyjuan Cannady, Josh O’Garro, and Tiago Soares creating a brutal combination of size, length, and athleticism, in addition to skill.

As a result of the teams having a very different distribution of size, despite similar aggregate height and length, they played different brands of ball.

SGA did a great job slowing down the pace and playing through their big men when possible. Coulibaly scored all 12 of their first quarter points and finished with 22 points on 9-12 shooting plus eight rebounds, both game-highs.

However, SCCS, a significantly better three-point shooting team, sped the tempo up and spread the floor more. Instead of playing inside out, they attacked in transition and in space whenever possible.

Tired legs was a theme in some of the games since it’s the end of the regular season. A high level of energy and overall play was maintained, but both the Cardinals and Eagles were looking gassed down the stretch.

By the last couple minutes in the third quarter, SCCS had gone flat from the field. F Caden Starr stepped up offensively with their only offensive production for the rest of the game until garbage time started with about 90 seconds left. He hit a pair of big threes, drew a three-point shooting foul and knocked all three down, and created a wide open layup with a drive and a dish to a teammate to put Ribet’s comeback hopes to rest.