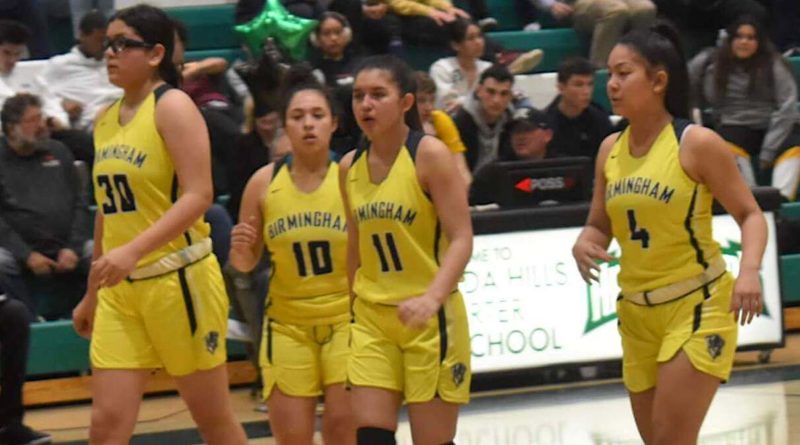 The 2020 Los Angeles City Section Division I high school girls basketball playoffs tip off on Tuesday. Here’s an inside look at the D-I bracket and the most intriguing matchups.

Starting from the top, No. 1 Westchester was the third dog in the strong Western League and only lost to the top finishers, Palisades and Hamilton, two of the top three seeds in the Open Division. The first time they played Hamilton, they only lost by three. The Comets are a worthy holder of the top seed in Division 1 and are a top contender to win it. When they’ve been at their best this season, they’ve played at a level that almost no teams in the field can match.

The Comets are led by versatile 6-0 C/PF Ariana Grimes. The senior is leading the team with 20.6 points, 1.9 steals, and 0.9 blocks per game. Freshman PG Rylie Waugh is second with nearly 14 PPG, and sophomore F Daniel Burnside leads Westchester with over 10 RPG.

All the same stuff about being a top contender can be said for No. 2 Birmingham. They played a hard schedule between their preseason and spot in the West Valley League, so don’t read much into their 12-15 record (5-5 in league). They nearly beat Taft twice and did beat El Camino Real last time they played them.

Birmingham has a handful of athletes who can put the ball on the floor and either drive-and-dish or finish in traffic. When they are knocking down jumpers they are very scary. Their perimeter defense is disruptive and they have enough size to be set in the paint throughout the Division 1 playoffs.

No. 3 Eagle Rock and No. 4 Garfield are solidly in the title hunt after getting second place in the Northern League and Eastern League, respectively. The two played in December and Eagle Rock won by five. King/Drew was tied for second in the Coliseum League and gets the fifth seed, and would be just barely behind them in the pecking order coming in. No. 6 seems about right for Van Nuys, who struggled to compete against strong Southern Section foes early in the year but won the Valley Mission League.

At No. 7, Carson is the sleeper of this division. Their only losses in the Marine League were to Open Division No. 5 Narbonne. The first was by two possessions, and the second was another well-contested game they eventually lost by 11. They didn’t play the hardest schedule but they took care of business against everyone who’s not at or above the level of the City Section’s best. On paper, they are one of the top contenders in the bracket and very well could’ve been seeded higher.

No. 8 Cleveland is another sleeper. They endured the brutal West Valley League gauntlet and went 2-8, but they very much competed against the City Section’s best. They very nearly upset El Camino Real in their last game of the season. It’s hard to put too much stock into one “impressive loss”, but recency bias is warranted. There’s nothing the Cavaliers haven’t seen multiple times that they’re going to see in the Division 1 playoffs.

They will play No. 9 Venice in the first round, another squad that struggled in a very challenging league. The Gondoliers were not able to compete much against Hamilton or Palisades, and in fact lost both meetings with Westchester by a score of 80-57. Venice also lost to Carson by 12. On paper they won’t be favored over any teams seeded above them, but they have been battle-tested.

No. 10 North Hollywood is a mystery team to some extent. They got second in the East Valley League with a 9-3 showing, but haven’t really faced any other CIFLACS Division 1 teams. They did take care of business all year against teams they couldn’t afford to lose to though.

On paper, No. 11 Dorsey, No. 12 Arleta, No. 13 San Fernando, No. 14 Fairfax, No. 15 Roosevelt (Los Angeles), and No. 16 Sylmar haven’t shown enough this year to show that they have a real shot at going all the way. But that doesn’t matter one bit if they show up and prove otherwise on the court.

Prediction time: Birmingham over Westchester in the finals

The teams that stand out to me are the ones who’ve proven their ability to give Open Division-caliber teams a run for their money, and then some in some cases. That’s why I would guess that we will see Westchester vs. Cleveland in one semifinal and Carson vs. Birmingham in the other.

Splitting hairs between these teams feels impossible, but I’m taking the winner of the bracket with Carson and Birmingham to win it all. If I had to pick one team, it would be the team that beat El Camino Real and nearly beat Taft twice. That’s Birmingham.