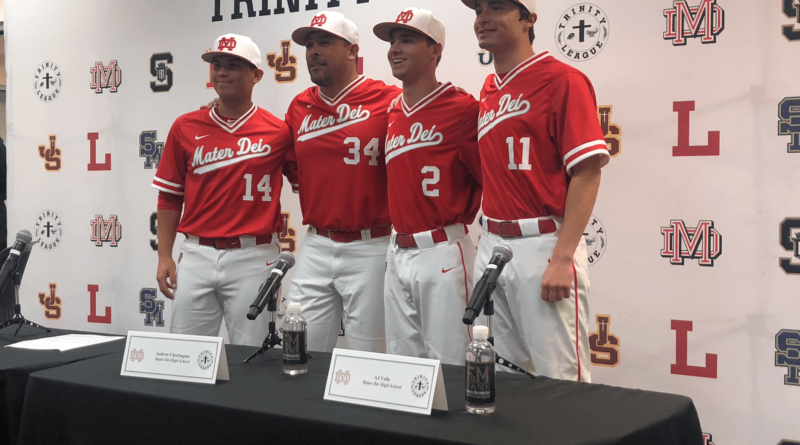 The Eagles return 15 seniors, including star shortstop Milan Tolentino, a UCLA commit. Matt McClure has been a starter for two years at Santa Margarita and is also back. He’s committed to LMU.

Santa Margarita won the Division 2 Southern Section championship last season in 12 innings over Norco by a score of 1-0. The Eagles are in Division 1 this season and will be contenders. Santa Margarita has a great lineup, if the pitching comes around they will be very dangerous. Look for Tolentino to close games this season for the Eagles.

Servite head coach Shawn Gilbert thinks his team will be better this year than last when they finished fourth in league.

“We’re more well rounded at each position,” he said. “Each individual position is solid. The question is, like it is for every team, is how will we score runs.”

Sophomore Chris Grothues, a UCLA commit, returns as a starting pitcher for the Friars.

“He’s one of the best players I’ve ever coached,” Gilbert said.

Garret Guillemette, a USC commit at catcher, is back too. Jake Lappin has started at first base since his freshman season at Servite. He’ll be a senior this year.

“We’ve lost a lot from last season,” head coach Richard Mercado. “It’s not a rebuilding year, we just need others to step up.”

2021 UCLA commit Alonzo Tredwell is lost for the year due to Tommy John surgery. He would have been the Monarchs number one arm.

Senior Andrew Chorbagian will bat leadoff for Mater Dei in 2020. He’s a middle infielder. Junior AJ Valle will play third base and pitch. Senior Mike Garcia will pitch too.

The Monarchs are in Division 2 in the Southern Section this season. They finished in fifth place in the Trinity League last year.

JSerra is loaded. The Lions were represented by three 2021 UCLA commits on Friday: Gabe D’Arcy (OF), Luke Jewett (RHP) and Cody Schrier (SS). Gage Jump, another UCLA commit, will be pitching for JSerra as well.

The Lions are in the midst of a postseason title draught that has a real chance to end in 2020.

“We can’t get over that CIF hump right now,” head coach Brett Kay said. “It all comes down to how much these kids love each other.”

From only the 20 minute media session, it was easy to see how strong JSerra’s team chemistry is under Kay. He said he bought his team $25 worth of Girl Scout Cookies last week. He loves the group

JSerra has so much talent. They’re hoping their respect for each other will put them over the top.

UCLA football and baseball commit JonJon Vaughns will be St. John Bosco’s top player this season, but after him there are a lot of new faces.

Albert Rios, a middle infielder whose committed to Stanford, will be another key piece for the Braves in 2020.

St. John Bosco is in Division 2 of the Southern Section this season. They’ll need to improve on their last place Trinity League finish a year ago in order to make the postseason.

Orange Lutheran is in contention to be the top team in Southern California when Scorebook Live California releases our preseason rankings next week.

The Lancers have three great pitchers in senior Max Rajcic (UCLA), senior Christian Rodriguez (Cal State Fullerton) and sophomore Louis Rodriguez. Sophomore Kai Negrete is another name to know too. That pitching depth will make them difficult to beat on any given day.

The Lancers won the Trinity League last year and will have a great chance to do it again in 2020. Their pitching is next level, but Orange Lutheran also has a talented lineup led by senior third baseman Elijah Buries.