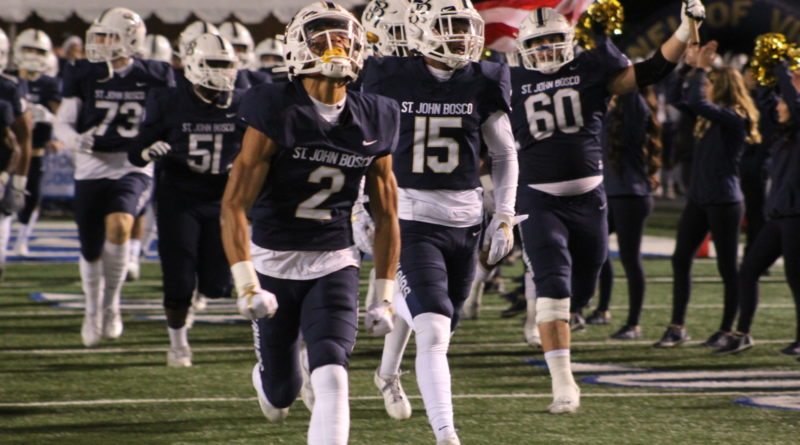 On Monday, the CIF Southern Section released their All-Division teams for the 2019 football season as voted on by the Football Coaches Association. State champion and undisputed national champion St. John Bosco led the entire Southern Section in representation with room to spare over any other team in any division.

In total, 11 Braves’ players were recognized on the All-Division 1 team, plus head coach Jason Negro, the Coach of the Year.

5-star quarterback D.J. Uiagalelei, now a Clemson Tiger, was named the Offensive Player of the Year. He threw for 4,225 yards–over 300 per game–and 48 touchdowns to only two interceptions. That was good for a huge passer rating of 144.2, and he also ran for 412 yards and eight more touchdowns.

Offensive linemen Drake Metcalf and Edward Riley made the cut. Metcalf, a senior, is a 4-star Stanford-signee and a First Team All-American. Riley is also a nationally-ranked OL in the C/O 2021 and is widely considered one of the top O-linemen in SoCal.

Two more offensive players made the cut in wide receivers Logan Loya and Kris Hutson. Like Metcalf, they are 4-star seniors headed to Pac-12 schools. Loya, who caught for 1109 yards and nine touchdowns and led the Braves with 72 receptions, is already enrolled at UCLA. Hutson led Bosco with 1,290 receiving yards and 15 receiving touchdowns, in addition to nearly 400 kick returning yards, and is signed with Oregon.

There was another honoree in the front seven in sophomore DE Nathan Burrell. In addition to 58 tackles, he was second on the team in tackles for loss (nine) and sacks (6.5). He also had a crucial interception in the Division 1 championship game against Mater Dei that was one of the top defensive plays of the year in high school football given the circumstances. Burrell already has at least six D-1 offers including USC, Michigan, Arizona State, and Washington.

Lastly, two defensive backs made the cut in seniors SS JonJon Vaughns and CB Josh Alford. Vaughns, a UCLA-commit, had 64 tackles (five for loss) with an interception and a forced fumble. Alford is committed to Idaho State and led St. John Bosco with four interceptions and nine passes defensed in addition to 41 tackles and a forced fumble.