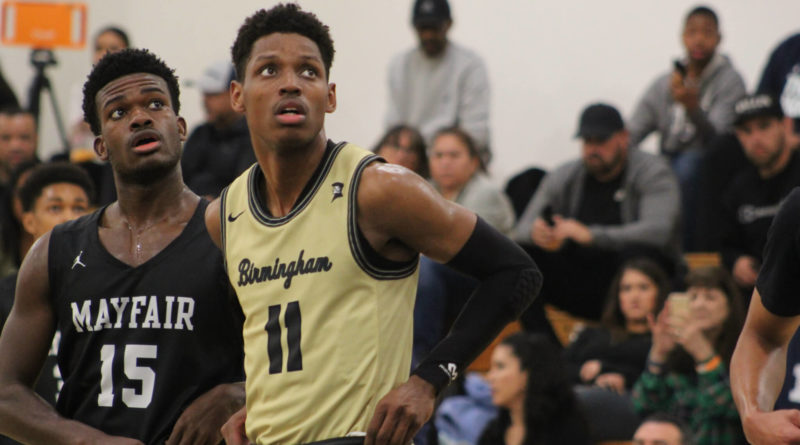 The Huskies just keep winning. Jared McCain is one of the top freshmen in the region.

Rancho Christian beat Gonzaga (Washington D.C.) 58-55 on Saturday. The Eagles close out the season against Ribet Academy on Saturday.

Since losing to Sierra Canyon at the Classic At Damien in December, Etiwanda has won 13 games in a row. They dominated Westchester on Saturday 63-33.

The Saints slipped up last week against Serra, but bounced back with a 75-60 win over St. Bernard. St. Anthony can clinch the Del Rey League title with a win over Bishop Montgomery on Wednesday.

The Braves sit atop the Trinity League with a 7-1 record. They play Mater Dei on Tuesday.

Mater Dei lost to Whitney Young (Illinois) 67-57 on Saturday. They host St. John Bosco on Tuesday; the winner will most likely win the Trinity League.

Santa Clarita Christian was off last week. They finish the regular season against San Gabriel Academy on Saturday.

Ribet lost to Renaissance Academy 59-56 in a Harbor League game last week. The Fighting Frogs can lockdown the league title with two wins this week. Ribet plays Rancho Christian on Saturday. If they go 3-0 this week, they may make the Open Division.

Windward is 3-3 in their last six games. Their best wins are over Damien and Heritage Christian.

Heritage Christian can claim a share of the Olympic League title if they beat Maranatha and Village Christian this week.

JSerra will most likely finish in third place in the Trinity League. The Lions lost to Whitney Young (Illinois) 60-52 on Friday. They play Orange Lutheran and Mater Dei to finish league play.

Fairfax came back from 18 points down to beat rival Westchester last week.

Cathedral Catholic has a huge game against St. Augustine on Tuesday. The Dons have won nine of their last ten.

St. Augustine has a better record than Cathedral Catholic, but they lost to the Dons head-to-head 59-57 last month. They’ll have a shot at redemption on Tuesday.

The Vikings lost their one game last week to St. Anthony 75-60.

Damien plays Los Osos on Friday to end the regular season. The winner will most likely finish in second place in the Baseline League. Damien’s best win is over Birmingham.

The Eagles play Notre Dame in the quarterfinals of the Mission League tournament on Monday. Their best wins are over Rolling Hills Prep and Oxnard.

Since losing to Chaminade in the Classic At Damien, Rolling Hills Prep has won 11 games in a row.

The Yellowjackets are on a 20 game winning streak that spans well over a month.

Oak Park has won 19 games in a row since falling to Fairfax in early December.

The Patriots return to the Top 25 following wins against El Camino Real, Mayfair and Taft.