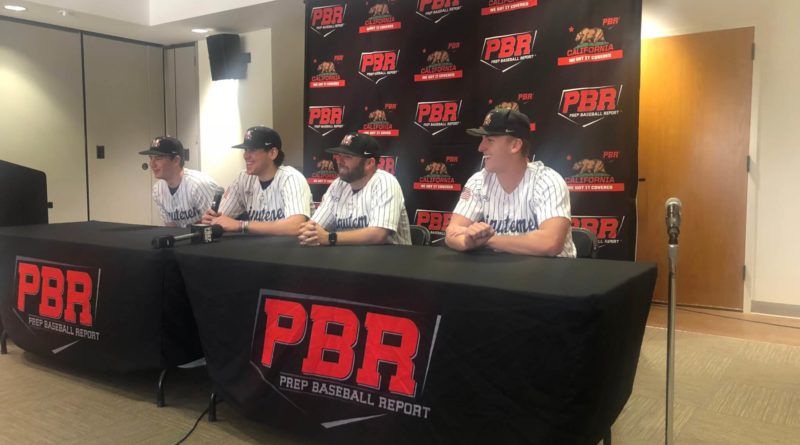 Scorebook Live California reporter Connor Morrissette breaks down what he learned from every team on Wednesday below.

Harvard-Westlake fell in the Division 1 Southern Section championship game last season to Cypress 2-0 at Dodger Stadium. The Wolverines lost star pitcher Sam Hliboki to graduation, but head coach Jared Halpert loves his team in 2020 and thinks that they can return to the title game.

“We have 23 kids that are exceptional baseball players,” Halpert said.

Harvard-Westlake’s lineup is incredible, but Halpert made it clear that his pitching staff is talented and deep as well.

“People should be pleasantly surprised with our pitching staff,” Halpert said.

Jordan Kang, Tyler Ganus, and Christian Becerra are the names to know there.

Mira Costa will have some new faces, “it’s a new look for us,” head coach Keith Ramsey said.

Jonah Storey, a junior, will be one of the team’s top pitchers.

The two top players on Maranatha are Eli Paton, a UCLA commit that can play anywhere in the outfield and first and third base, and Brock Vradenburg, a Michigan State commit at first base.

“These are two of the best left handed hitters in the country,” head coach Matt Shupper said.

Maranatha is in Division 2 this season where they should contend for a Southern Section championship.

Thomas Babineau will be the number one starting pitcher until Huntington Beach gets a few transfers eligible.

Tyler Conan and Caden Aoki are two pitchers who will have to sit out, but once they’re eligible they’ll form a three-headed monster with Babineau.

The reigning Division 1 Southern Section champions will be very dangerous once again, but they lack the star power of years past, according to head coach John Weber.

Weber still likes his team’s chances of winning another Division 1 title though, “if everything clicks.”

Star pitcher Brett Wozniak, a Kansas State commit, returns. He got the save in last year’s 2-0 championship game win over Harvard-Westlake.

Luke Davis, a sophomore catcher and pitcher whose committed to USC, is back for Cypress too.

Corona has 15 seniors, which is the most Wise has had in his 11 year Corona tenure.

Another top senior is Michael Flores, a Long Beach State commit, who will be the team’s top pitcher.

Expect Bishop Amat to be a dark horse title contender in Division 1 of the Southern Section.

Jared Jones, a Texas commit and future pro, is the team’s best pitcher. He throws in the mid to upper 90’s. Emilio Morales, a USC commit, will pitch as well along with Michael DeHaro, a UC Santa Barbara commit. All three of these guys can hit too.

The Matadors are in contention to be Scorebook Live California’s no. 1 team when our first baseball rankings come out next month.

Damien has won the Baseline League twice in the last four years. The Spartans boast a strong lineup, but how far they go in the playoffs will be determined by what they get on the mound.

Castellanos is the team’s top pitcher. He’s had a very strong offseason. Sophomore infielder Mikey Romero, an Arizona commit, is another name to know. He’s competed with Team USA in youth baseball in the past.

The Broncos will be one of the top team’s in the Inland Empire.

The team will have a strong lineup, but the Golden Hawks are still looking for pitching depth, according to Lucas. If another arm emerges, look for El Dorado to make noise in Division 2 of the Southern Section.

Pitcher/outfielder Corbin Ellis was one of the player representatives on Wednesday. He also plays football at El Dorado.

The Diablos are looking to rebound in 2020. They didn’t make the playoffs a year ago for the first time in 11 years.

The South Coast League will be extremely competitive, according to head coach Chris Ashbach. He joked that when people ask him where he thinks his team will finish, he sometimes says first and sometimes says fifth.

Shayne Simpson, a first baseman and pitcher, is committed to California Baptist. Paul Skenes is one of the top catchers in the region who can also pitch. He’s committed to Air Force. Those are the two leaders for the Chargers.