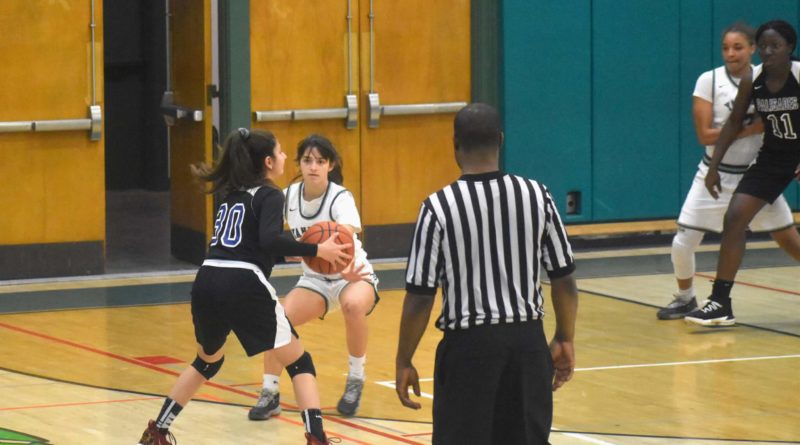 LOS ANGELES– Palisades rode a 12-2 start and held off Hamilton in a 59-50 win that effectively won them a league title. Hamilton overcame the Dolphins’ strong start and made numerous surges to close the gap, but every time, Palisades responded with a run of its own and held on to win. Here are three observations from the game:

The two times have fairly similar size, both rebounded at fairly equal levels, and both forced a lot of turnovers, particularly in their full-court presses. The biggest difference was that Pali was able to generate more easy looks.

They play through a dominant, versatile C/PF in Jane Nwaba, who isn’t the tallest frontcourt player but has long arms and is too strong and athletic for almost anyone at the high school level to match up with. She has great touch anywhere from the high post inward and takes over routinely with her inside scoring and offensive rebounding/put-backs.

While she was certainly dominant in the paint for Palisades with a big double-double to show for it, Hamilton gave her a lot of defensive attention, and she responded by showing off a very high level of decision-making and passing for a big. Between her scoring and the easy looks she got for the Dolphins, their halfcourt offense was just a bit steadier.

Hamilton had a good amount of second-chance points as well, but they generally lived and died by the three. The Lady Yankees did open up driving lanes by spacing the floor at least four players out, but weren’t quite able to consistently get easy looks at the rim. They got a lot of good looks from three, and took quite a few difficult ones too. When they were knocking them down, they were nearly unguardable, but went cold just enough–especially late in the second half–to fall to Palisades by single-digits again.

With a little over three minutes left in the game and Hamilton down by three possessions, two unusual events caused the game to stop for half an hour. There was a brief fight between one Hamilton player and one Palisades player, and at the same time, completely unrelated, a Hamilton player had a medical emergency that kept play stopped for about 25 minutes thereafter. The player eventually had to be taken away by the paramedics. As a result, the fourth quarter was put on a stressful pause for quite a long time.

Hamilton moved to 7-2 in league play with their only losses coming to Palisades. Palisades is now 9-0 in league play. Both teams have three games left in league, but in the first go-around of league, Palisades beat their three remaining opponents by a combined 139 points. The Dolphins might as well be penciled in as league champions already.

However, by no means does that mean Hamilton has nothing big to play for–there’s a very solid chance that these teams will meet deep in the playoffs. We have them as second and third in the Southern Section behind Granada Hills Charter, and that is unlikely to change after this victory, although Birmingham and El Camino Real are right there with them. This win just about certainly locked up the number two seed in the playoffs for Palisades, but with Hamilton presumably going third, fourth, or fifth, there’s they could absolutely make it to the semifinals or finals and get their shot at revenge.

If they do, based on how the first two games have gone, they’d have to like their chances if they have a strong shooting night from the field.