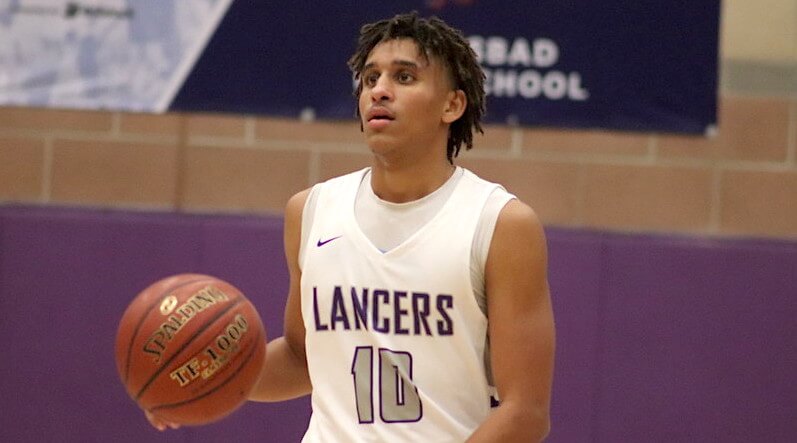 After Foothills Christian’s surprising loss to Francis Parker on Wednesday, there was potential for more chaos in the top five when Torrey Pines visited rival La Costa Canyon a day later. A sloppy first half found the Falcons trailing by 19 points at halftime. Little by little they worked their way back in the second half. Torrey Pines trailed by three points with 7.1 seconds remaining when they rebounded a missed La Costa Canyon free throw and quickly pushed the ball across half court. Junior point guard Chris Howell attempted three-pointer resulted in him being fouled with under a second to play. Howell knocked down the first two free throws before La Costa Canyon Canyon called their final timeout to “ice” him. Howell knocked down the final free throw, and the Mavericks desperation attempt was wide, sending the game to overtime. The teams traded baskets until a Nate Witte three-pointer and a Brandon Angel steal and dunk sealed the game for the Falcons, 68-63, completing their comeback. The Falcons had four players in double digits led by Brandon Angel’s 19 points.

Last season’s Rancho Buena Vista team were the runners-up in division two, but were unsuccessful in their attempt to win on the road against rival Vista. This year’s team completed that goal on Friday night despite trailing by a point heading into the third quarter. Rancho Buena Vista outscored their rivals 21-8 in the fourth quarter for a 57-45 win, their first in the Panthers Den Events Center since the 2010-11 season when the Longhorns were led by San Diego legend Johnny Dee. Seniors Jack Bailey and Noah Fields, who both recently passed the 1,000 career point mark, recorded double-doubles in the win.

El Camino junior point guard Tyson Robinson has put together a really impressive season so far. He’s helped lead the Wildcats to a 16-5 record, with double digit victories in every league game to date. In Friday’s win over Oceanside he had 29 points, 5 assists, and 4 steals.

Carlsbad senior point guard Jailen Nelson has had a huge senior season and added to it during Tuesday’s win over La Costa Canyon. Trailing by two points in the last few seconds of the game, Nelson dribbled across half court and launched a shot that banked in, beating the buzzer and giving the Lancers a one-point win.

2016 San Marcos grad Mikey Howell had 12 assists in the UCSD’s win over Sonoma State. The redshirt junior point guard is averaging seven points and seven assists per game for the 19-1 Tritons who are playing their last season of division two basketball before they move to the Big West next year.