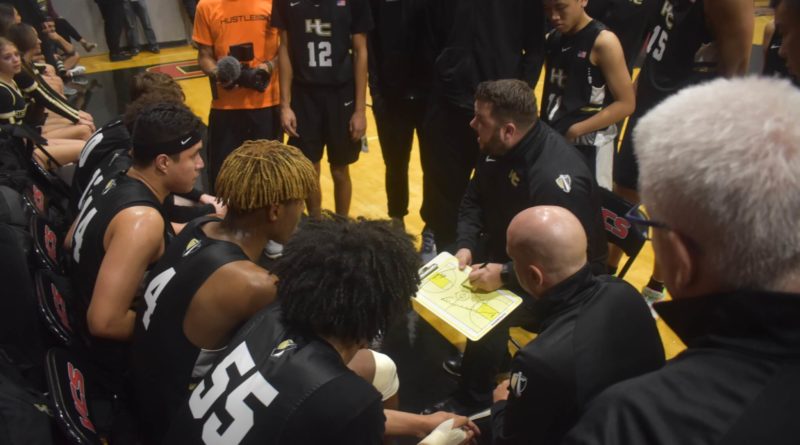 SUN VALLEY– Village Christian defeated Heritage Christian 56-55 Tuesday night after trailing by ten points in the second quarter. They trailed by a point with less than ten seconds remaining, and took the lead on a layup by freshman G/F Thomas Luczak.

Pawel Luczak led all scorers with 19 points for the Crusaders behind an excellent showing from deep, and Jordan Fuller added 12. Skyy Clark led Heritage Christian with 15 points.

Part of the Crusaders’ identity is that they bring more energy and toughness than their opponents on a nightly basis. Heritage Christian was not lacking in their willingness to battle, but VCS set the tone and were the aggressors most of the night. When the game looked like it might get out of hand early on, it was their grit that got them back in the game and got HCS rattled.

They have a number of tone-setters in that regard. Really it’s the whole team, but senior guards Jordan Fuller and Matt Lee stand out on a regular basis on both ends as far as bringing the edge and pumping up their teammates, even when guarding big-time offensive threats who are quite a bit bigger than they are. It’s just the Crusaders’ identity.

The Warriors were without two of their best players in Dillon Depina and Justin Rochelin, and they sorely missed them. Both players average double-digit scoring, and are generally critical all-around players. The role players certainly stepped up in their absence, but it wasn’t quite enough to get the job done.

Village Christian has outstanding perimeter defense, and without Depina’s shot-making and steady presence in the offensive flow, Heritage Christian was not able to get into a major rhythm offensively. Rochelin’s length would’ve been very helpful in the front-court against a Crusaders squad without a lot of size but enough to get by. VCS did a great job exploiting their absences by attacking the offensive glass. Luckily for HCS, both are expected to return quite soon.

5-star G Skyy Clark averages 25 points a game for Heritage Christian, but was held to 15 and was forced into several uncharacteristic turnovers. Not only did he have to deal with a gauntlet of excellent on-ball defenders all game, in particular Jordan Fuller and Immanuel Taylor, but he was double-teamed at nearly all times.

At times, VCS was even doubling him in the backcourt before getting the ball across. Not just as part of a regular full-court trapping press, but just committing to taking him out of the game as much as possible. They successfully contained him, and consistently opting for the other Warriors to go 4-on-3 worked just well enough to pull out the W.

VCS’s big second-quarter run couldn’t have happened without Taylor changing the tempo by drawing a litany of fouls in short time. Some of it was just using his quickness to get into the lane and draw contact, and some of it was baiting defenders into reaching even 60 feet away from the basket. When he got to the line, he converted.

The box score won’t show the impact of it, but that was one of a few ways that his presence significantly changed the game even as the smallest, youngest guy on the court.

While the Warriors couldn’t quite pull out the victory, Alex Rodriguez (fittingly referred to as A-Rod) made a big impact as a spark plug without scoring a lot of points. He helped on the rebounds, fought for loose balls, played aggressive defense, and took at least two charges.

That energy got his team and fans going numerous times, and will be even more effective when two of Heritage Christian’s top offensive threats are back alongside him in the lineup.