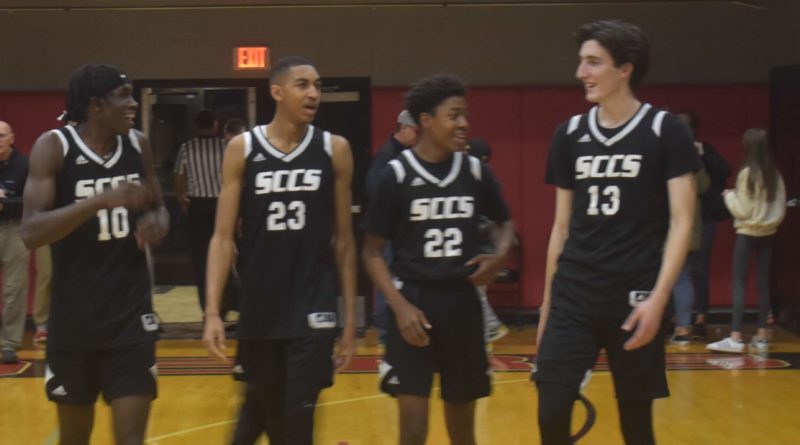 SUN VALLEY– Santa Clarita Christian had a stranglehold from the first quarter onward Friday night in an 89-61 victory at Village Christian. However, despite getting outclassed pretty decisively, Village Christian still looked the part of an 18-4 team in excellent shape to contend at a high level in the Division 3 playoffs down the road. Here are three observations from the game:

So often, Ty Harper has been tasked with carrying the scoring load heavily so his performances that have drawn him the spotlight have been as a pure scorer more than an overall playmaker. But the Cardinals have so many talented offensive threats in peak form, and their schedule finally is calming down after taking on the full SoCal gauntlet for a couple months, so he’s capitalizing on opportunities to show that he can shine as a true point guard both now and down the road.

Against Village Christian, he got a couple early buckets and then spent a lot of the game acting as a decoy to get his teammates involved. I’m not sure if he racked up an unearthly number of assists, but he got his teammates open and in rhythm just by running the offense and being on the floor. I don’t think Harper took close to ten field goal attempts in the game, but he was still dominant. His two-man game with Kaleb Lowery was too much to handle, not that that’s anything new. And he does a great job finding open teammates after absorbing a lot of attention in transition as well.

For example, all eyes were on Harper on this drive. He read it way in advance, quickly got in the lane and jump-stopped under control, and hung in the air long enough that Lowery was open with his hands ready before he came down.

On this transition assist, the instant read of getting the ball back to Lowery on the give-and-go was simple. Having to figure out almost immediately how he was going to look off the defender and find a small seam makes this very impressive.

This game was never really close, even if it was still a single-digit game after a quarter, but the Crusaders never conceded an inch or let it turn into a blowout until late in the game. At minimum, Village Christian doesn’t have nearly enough size to match up with SCCS–almost no one does–even though they have good talent from one to five.

But their strong perimeter defense forced the Cardinals to work for everything, and they fought hard to keep the rebounding battle as close as possible. They also still had a decent offensive showing against a long, organized SCCS defense. So Village Christian “fell” to 18-5, and should be considered perhaps the top contender to win Southern Section Division 3A.

Late in the fourth, Ty Harper went for two wild dunk attempts, and one in particular left the crowd pulsating. Both of them resulted in shooting fouls and free throws. While the attempts were absolutely absurd and very few people on the Earth could even dream of turning them into near-poster jams at 6-3, it begged the question of whether or not Harper could get to the free throw line more simply by routinely going through and over guys who have no chance at contesting him. Maybe the answer is yes, but trying to dunk over everyone at point guard height is physically unsustainable.

Josiah Gatwood entered the game for Harper after that, and immediately got to the foul line by nearly posterizing a guy as well. Finally, he completed the sequence of four dunks with a highlight put-back jam. Kaleb Lowery also drew a foul on a crazy poster attempt late in the game.

It’s not like Village Christian had stopped running back on defense and was giving up open dunks. SCCS had just revved up the notch of how wildly aggressive they were trying to cram in traffic, and every time, it resulted in points at the line. Hopefully there’s even more where that came from.