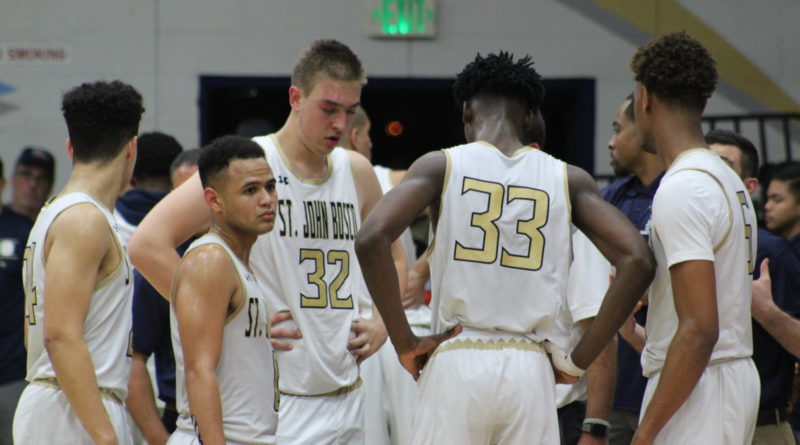 Askew hit a two-pointer with under a minute to play to cut St. John Bosco’s lead to 66-62. From there, the Monarchs had two chances to make it a one-possession game but turned the ball over twice and never scored again.

After the final buzzer, St. John Bosco students stormed the court and then there was a tense moment in the handshake line when Askew took exception to a St. John Bosco player not shaking his hand. Eventually Askew left the gym with Braves students cheering and chanting behind him.

“I love our students being here,” St. John Bosco coach Matt Dunn said. “I was trying to keep them away from their guys, obviously we don’t want them to get near their guys, but it seemed like everyone behaved well given the circumstances.”

These two schools don’t just have a football rivalry …

St. John Bosco came out firing and finished the first quarter with 23 points on Friday.

“[Mater Dei] is a hard team to guard so we had to focus on scoring and I thought we did that pretty consistently tonight,” Dunn said.

Josh Camper, Wynton Brown, Lamaj Lewis, Isaiah Holm and Jeremiah Nyarko all finished in double figures for the Braves. When Askew exploded for 18 points in the fourth quarter, it was the Braves’ balanced offensive attack that won them the game.

When Askew cut the deficit to four, Brown made a two and then Holm put down a dunk to clinch the victory.

Before the season started it looked like Mater Dei was going to be the clear challenger to Sierra Canyon in the Southern Section Open Division playoffs. While that could still happen, Friday showed that the Monarchs still have work to do to get to that level.

After the first quarter, Mater Dei assistant coach Jason Quinn went on a tirade criticizing his team’s defense. In the third quarter, the Monarchs only scored five points. This was a road game in an extremely hostile environment, but Mater Dei head coach Gary McKnight still expected more from his group.

“We had a couple lulls in our offense where we didn’t score and we didn’t get some stops when we should have,” McKnight said. “Defensively we’ve got to play a lot better.”

Mater Dei will play a game in the Hoophall Classic in Springfield, Massachusetts on Monday before returning to California to play JSerra on Wednesday. The Lions are the third team tied atop the Trinity League with Mater Dei and St. John Bosco.

Bosco plays El Camino Real Monday and then Santa Margarita in the Trinity League on Wednesday.