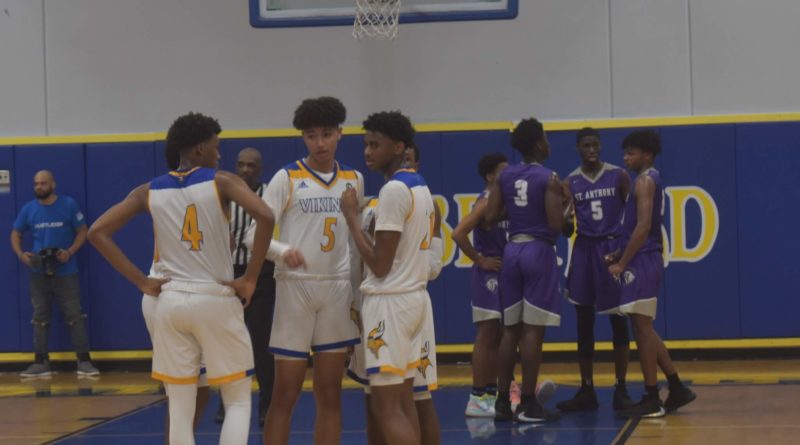 PLAYA DEL REY– St. Anthony had been playing catch-up all Wednesday night after trailing nearly the whole game. But every time they made a push to diminish or erase the double-digit deficit, St. Bernard responded with a run of their own.

The Saints had one left push in them late in the fourth quarter down eight points with only a few minutes remaining, and pulled through to win the heated battle 67-62. Here are three observations from the game.

Neither team ever left their full-court press/trap for any sustained period of time. As a result, there were a lot of forced turnovers, and much of the game was played in transition. Both squads have an abundance of long, athletic defenders, and will continue to give almost everybody they face issues getting into their halfcourt sets, even if that means giving up an occasional easy bucket on broken coverage.

The Saints were down by double-digits as early as the first quarter, and trailed almost the entire game. Numerous times, particularly in the second and third quarters, St. Anthony made a push and seemed to take control of the momentum, and then St. Bernard would immediately push the lead back to double-digits and retake the momentum.

As a result, St. Anthony still trailed by three possessions multiple times with less than half a quarter remaining in the game. They also had to get a lot of it done without two key backcourt members as well, as they lost guards Kaih Williams and Jaayden Bush around the third quarter to leg issues.

Williams was able to limp off on his own power but was in severe pain and was receiving treatment near the bench for the rest of the game. Bush missed a lot of the second half, but came back in around the middle of the fourth quarter, and drained a crucial three on the first possession after deciding he was good to go. Luckily, Williams was walking around after the game and the situation seemed hopeful going forward, and his team held it down when he and Bush were unable to go.

STICKING WITH THE SYSTEM

Both teams generated good shots, but struggled to knock them consistently down outside the paint for much of the game until the Saints got going a little bit from three down the stretch. In fact, both teams missed quite a few makeable shots from inside the paint as well. But neither team got rattled, and both continued moving the ball and players effectively all game when they did get into their halfcourt offenses. Ultimately, St. Anthony got up a lot of good looks from three and ended up hitting quite a few of them.

St. Anthony does an outstanding job keeping the ball hopping. Their halfcourt offense is mostly predicated on spacing the floor, moving the ball, and either eventually trusting it to find an open shooter or finding a good opportunity to attack. Their activity around the perimeter and off-ball screening also allows their bigs to get some good post position as well.

St. Bernard’s halfcourt offense is not too different, as the ball rarely stops and they work to pass up decent shots for great shots. The biggest difference is that they have a heavy–and effective–dependence on dribble hand-offs to get there. But they manufactured plenty of great looks from the field throughout the game when they got into their sets. They just didn’t knock enough down, and that was the difference. Some nights that’s just how it goes. But they will be in great shape going forward if they keep adhering to an effective system.