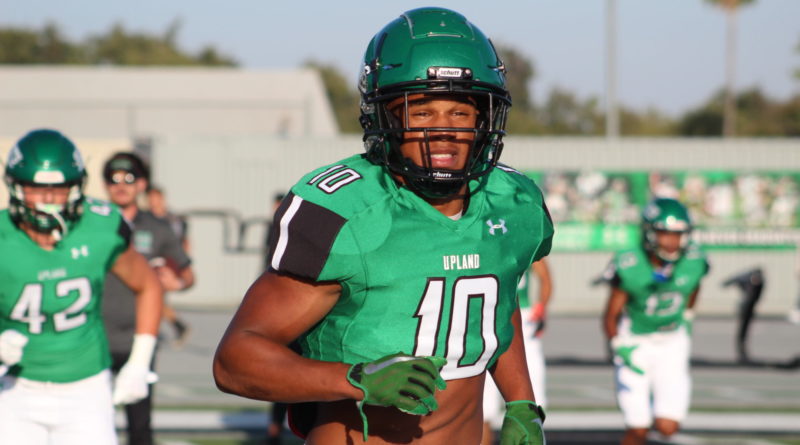 Stroud threw for 3,878 yards and 47 touchdowns 65.9% completion for the Division 3 semifinalist. He signed in December with Ohio State.

The junior was given the Southwestern League Outstanding Offensive Lineman award.

Flowe, the consensus top linebacker in the country, finished with 123 tackles and a career-high 18 tackles for loss, ten sacks, and 13 QB hurries. Flowe signed with Oregon in December.

The Southwestern League MVP was one of the top players in SoCal on both sides of the ball, in addition to standing out on special teams. On offense, Hughes rushed for nearly 1,700 yards and 27 touchdowns. On defense, he finished with 100 tackles at safety for the Division 7 champion. Hughes received double-digit college offers, primarily as a DB but perhaps in all phases of the game, before committing to San Diego State.

The 4-star recruit took another step as a senior and was one of the better passers in the country. In only 11 games, he threw for 3,081 yards and 40 touchdowns with only two interceptions, good for an amazing passer rating of 144.5. Illingworth will play his college ball at Oklahoma State.

The leading rusher in the Inland Empire with room to spare, Allain ran for 1,984 yards and 32 touchdowns as a sophomore, and finished with over 2,000 yards of total offense.

One of the best players on one of the better teams in the country, Floyd ran for 1,369 yards and 28 touchdowns on a strong 9.3 yards per carry. He also had a few slot receptions that put him well over 1,500 yards of total offense on the season.

In only ten games, Yary caught for 621 yards and 12 touchdowns at tight end. He’s received at least 15 D-1 offers.

The 6-5, 285-pound guard will play his college ball at Fresno State.

The First Team All-Baseline League lineman will next play at Washington State.

The best member of the Huskies’ dominant offensive line, Herrera was named the Big VIII’s OL of the year.

The top standout on the Huskies’ great offensive line, Perez committed to Sacramento State in November.

Estrada was named the Citrus Belt League offensive co-MVP, a rare honor for an offensive lineman.

Arguably the top football prospect in the country in the Class of 2021, Foreman anchored one of the best front sevens in SoCal. It’s not uncommon to see three offensive linemen at a time with the sole task of containing Foreman.

The Southwestern League’s Most Outstanding Defensive Lineman, Jacobsen punctuated one of the SoCal’s better front sevens that put terror into Division 7. He finished with 77 tackles and a team high-25 tackles for loss and nine sacks. He also had an interception and two forced fumbles.

The Ambassador League Defensive Player of the Year led the Falcons to an improbable Southern Section Division 5 title and state championship game appearance, and will next play at Oregon State.

Gallagher was one of the top players on the Division 2 quarterfinalist, and a First Team All-Southwestern League selection.

At just 5-11, 170, Miguel Bautista was one of SoCal’s top middle linebackers and the Big VIII League DPOY, leading Centennial in tackles (82), tackles for loss (seven–tie) and sacks (10.5).

The four-star recruit had 14 tackles for loss, nine sacks, and a team-high 14 QB hurries in only ten games. Flowe currently has at least 22 D-1 offers.

The Mountain Pass League’s Defensive MVP made 112 tackles, 12 interceptions, ten deflections, and three forced fumbles for one of the top teams in CIFSS Division 6.

Robinson was named the Citrus Belt League Defensive MVP. He finished with 80 tackles, four interceptions, and 12 deflections, and chose Boise State over at least ten other options.

The First Team All-Big VIII League DB was one of the best lockdown cornerbacks in the Southern Section last season. Young will play college ball at Cal.