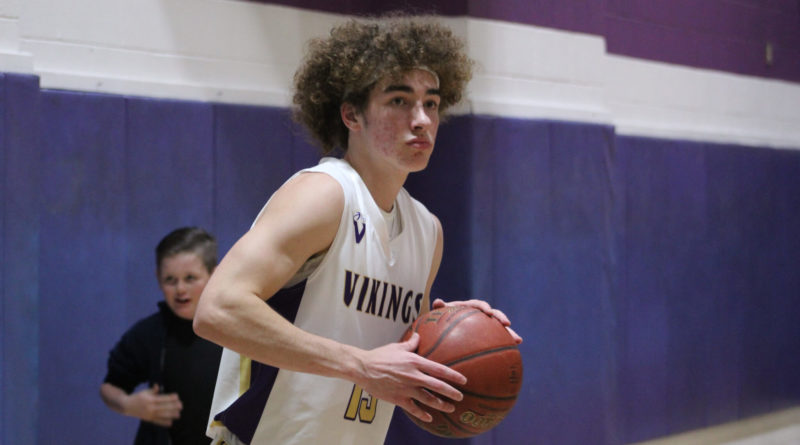 VALENCIA — Valencia hung on to beat Saugus 62-59 on Tuesday in an exciting Foothill League opener. Below are three observations from the game.

CAME DOWN TO THE BUZZER

The last minute of this game was frantic.

With 55 seconds left, Valencia senior Junior Camacho hit a deep three point shot from the right baseline to put the Vikings up 62-56. On the ensuing Saugus possession, Nate Perez nailed a straightaway three to make it 62-59.

Saugus then fouled Valencia senior Jake Hlywiak sending him to the line with 22 seconds left. Hlywiak missed the front end of the one and one and Saugus grabbed the rebound with a chance to tie.

After a timeout, Saugus senior Adrian McIntyre misfired on a three point shot with just seconds left in the game. The Centurions grabbed the offensive rebound, but did not get another shot up before time expired giving Valencia a key 62-59 Foothill League win.

Valencia’s junior guard led all scorers with 24 points on Tuesday night. In a game that was often played at a sloppy, breakneck pace, Veluzat was almost always in control. He made smart passes for assists and consistently finished at the rim. Valencia sharpshooter Jake Hlywiak had an off night and Veluzat picked up the slack to lead the Vikings to a big win.

Valencia junior forward Gabe Latkovich scored eight points off the bench for the Vikings and had a block. He defended well and always seemed to be in the right place at the right time on offense.

Saugus had one of their bench players come in for just a few seconds at the end of the first half. He fouled Hlywiak 50 feet away from the ball and the Valencia senior made both free throws. Those two points turned out be costly.

Valencia and Saugus will meet again on January 24th at Saugus. Saugus will have a chance at revenge in a game that will most likely decide the Foothill League title.