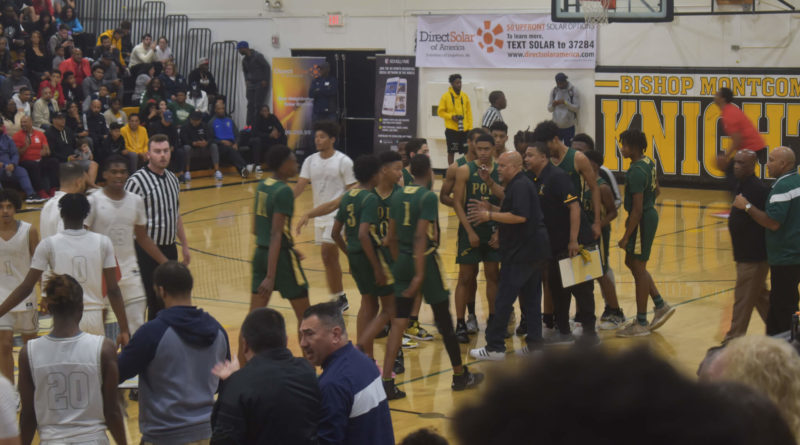 TORRANCE — Behind huge nights from Dior Johnson and Josh Christopher, Mayfair came from behind to beat Long Beach Poly 78-73 in overtime on Saturday.

Quavo, Kevin Durant, Ja Morant, and other stars were in attendance to watch the two 5-star prospects duel with another big-time prospect in Peyton Watson, who also had an outstanding game. Here are three observations from the game.

With their only player above 6-4 a 6-5 shooting guard in Josh Christopher essentially playing center, size is a huge issue for Mayfair. Long Beach Poly has the combination of athleticism and length to give a lot of great teams problems. With 6-9 Solomon Jones and 6-8 Peyton Watson working in the paint and more length and quickness on the perimeter with Chris Watson and Wendell Caldwell, Mayfair could have fallen victim to a horrible matchup.

Instead, Christopher did what he always does and will continue to do until he actually plays at the wing full-time in college, and play like perhaps the biggest guy on the court. In addition to dropping over 20 points, Christopher reportedly snatched in the vicinity of 20 rebounds on the night–he averages 14–and also protected the rim.

It’s great for Mayfair, and perimeter players who had to spend time inside in high school or college often are better off for it at the next level. Especially when today’s NBA is filled with strong, athletic wings who can drain threes and play multiple positions offensively while also guarding slightly bigger forwards on the other end.

Christopher may show up to college ready to snag several rebounds a game and comfortable guarding not only wings but some power forwards as well. When you throw in his bread and butter–his polished skill set on offense–that could bode very well for potentially going pro really quickly.

This is not the first disappointing loss in recent memory for the Jackrabbits, who are now below .500 on the season. But they played several stretches of very promising ball and nearly beat a great Mayfair team with two five-star offensive juggernauts rolling. The reason that they played better ball for most of the game than they have for a lot of the season is that it wasn’t just the Peyton Watson show.

Watson averages close to 25 points per game and finds ways to score every night, even when Poly is struggling. For instance, last week at the Classic At Damien, their offense was extremely sluggish against Damien (Hawaii) and even Watson wasn’t connecting outside of the paint down the stretch, so he started getting to the free throw line and it saved the game. Additionally, Poly’s defense is almost always strong and they usually rebound at least pretty well. The question is if the defenses can’t load up too much on Peyton Watson.

This time against a much better team than some they’ve recently lost to, Chris Watson was in a rhythm as both a scorer and playmaker, Solomon Jones was productive in an efficient manner, Darron Henry was disruptive, Gabe Cummings and Wendell Caldwell were knocking down shots, etc. Cummings might be the best pure shooter of that group on a team that really needs floor spacing, and can really be a difference-maker on both ends when he’s in rhythm. If they play like this every night, the Jackrabbits will be in good shape.

MAYFAIR PLAYING SO MUCH ONE-ON-ONE BALL

Christopher and Johnson scored almost all of Mayfair’s points, which isn’t necessarily an issue, but it was less than ideal how they had to hit difficult, contested shots in isolation for most of the game to get their points. Interestingly, Mayfair was moving the ball a decent amount, but Poly’s defense rarely got out of position because they knew it was almost always going back into the hands of Johnson and Christopher. Mayfair did a good job getting the ball in their spots as they always do, but if the role players aren’t more aggressive on the offense, the ball movement will simply land them right in the same spot–isolation.

Take this and-one from Christopher as an example. Mayfair’s ball movement is impressive, but in the end he still has almost nothing to work with, although he still makes it work.

Isolation doesn’t necessarily mean a lack of chemistry at all, but it would be great to see Christopher and Johnson getting better looks. What’s not clear is if they’re necessarily seeking them out because they are so fantastic at hitting the difficult ones they can create out of thin air.

When other Mayfair players actually did shoot, they were pretty efficient. Even though the team should and certainly will continue to play through Johnson and Christopher quite heavily, the best thing the role players can do for the offense is be more aggressive to open the defense up when they are off the ball.